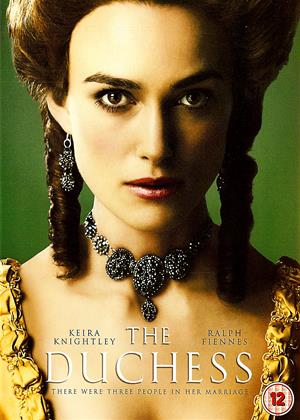 Reviews (5) of The Duchess

It's true that Keira Knightley pouts her way through this whole film but her performance as the extraordinary Duchess Georgiana of Devonshire is still remarkably good.

I thought this film would be moderately entertaining and it was more for its historic merit that I rented it. I was pleasantly surprised, then, that the script and plot weren't at all fatuous and that the story was told in a subjective way that lets the viewer make up his or her own mind about whether Georgiana was the English answer to Marie Antoinette: a privileged, vapid, aristocrat who had been handed enormous wealth on a plate, or a cuckolded woman who overcome almost insurmountable difficulties in her marriage to lead an inordinately difficult life under the thumb of a repressive, adulterous husband.

Definitely worth a viewing. I loved it.

Excellent cast and interesting story playing a bit like a 17th Century Princess Diana. Georgiana courted the press even back then and was quite well known and followed by the public. The Duke (her husband) is portrayed as a real pig and makes some very tough and hypercritical decisons. The film follows their lives through thick and thin and even the introduction of a 2nd woman into the marriage (very Camilla like).

The Blu Ray itself has a very good transfer with terrific level of detail in the intricate costumes and fabulous interiors. Sound wise it' s quite dull as dialogue driven plus I found the score rather repetitive and annoying.

The Duchess sees Keira Knightley at her wonderful best as Georgina. Miss Knightley's transformation from a happy young lady into a tormented soul is superbly acted. Brilliantly supported by her tormentor Ralph Fiennes.

The cinematogrophy is superb, with actual locations adding to the quality. A very moving and class piece of cinema.

Fine really. Gently paced, not over-long; watchable for the sumptuous costumes and sets, though never really gripping as a story. Ralph Fiennes is brilliant as the terrifyingly messed up husband and there are some finely acted cameo roles. Comparisons between Georgiana and Princess Di are strongly apparent. Something of Georgiana's aloofness and distance, neccesary to survive the barbed conventions of this repressed aristocratic environment, make her a little hard to completely engage with. It's a good film with nothing especially stand-out. Based on a highly succesful book by Amanda Foreman.

Keira Knightley confirms her progress as an actress by performing admirably as Georgiana in what is her most demanding role to date. A young aristocrat trapped into what amounts as an arranged marriage, she must contend with Ralph Fiennes as an unloving husband, who often plays away from home, or just doesn’t bother to hide his affairs. The Duchess is a fairly decent, robust and likeable costume drama, but one that I cannot help but feel would be better suited to television, just like The Queen before it. The settings and costumes are magnificent and it is an interesting tale, based sadly on true events. The only issue I can highlight is that despite providing the Earl with several children and the years passing by, Keira’s character still looked as young as she did on day one.