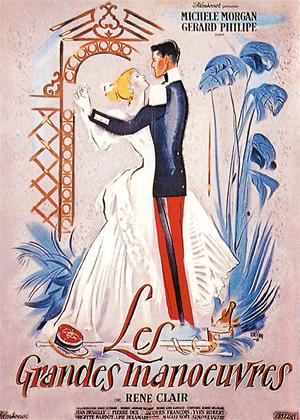 Well, then French farce … well spun light froth! A joy to see Brigitte Bardot so young – before the worst of the “sex kitten” studio nonsens - and Michèle Morgan impressively contained with depths of her own. My reaction to Gérard Philipe in this presentation was initially “what a right shocking bat eared little twerp” but he put on strength as the film progressed towards its shocking ending … or the more shocking alternative ending. The film as a whole gained weight and éclat as it went on – beautifully filmed and played - farce; four stars rather than five?

The accompanying “documentary” about M’selle Bardot is horrid – adulatory, meaningless Hollywood pap – avoid! Meanwhile, making comparison with M. Clair’s 1941 “Flame of New Orleans” – made in the USA with Marlene Dietrich – it was refreshing to see him back on native ground with a sharper, faster story. When I saw the earlier film I wondered how far he and Dietrich had been constrained by production and studio values to make a rather wooden, flat footed film … in 1941 there was no other refuge but Hollywood!

Browse in Graham Greene's Thirties film reviews and one often finds René Clair mentioned in passing as the epitome of stylishly incisive film direction. Come the War, when Clair left France and was denounced by the Vichy government, he was able to bring that spirit to his Hollywood creations. And so it is all the more dismaying to catch up with Les Grandes Manoeuvres (1955), which he made on return to France and was the first time he had essayed colour.

To watch this, one would not believe that Truffaut and others were in the offing. The scene is the summer of 1914, in a provincial town where soldiers, with glinting swords, have arrived upon horseback to prepare for tumultuous times.

Not that one would know it from this scenario. Naturally, these officers assumed that no such earth-churning scenes would ensue. It is all a bit of a diversion, in the spirit of which they lay bets that Gérard Philipe will, or will not, be able to seduce whichever woman wins a prize at a well-heeled raffle for the Red Cross. This turns out to be Michele Morgan, a divorced hat-maker who has been brought from Paris by a lover who plans to marry her when the fuss has abated.

There is no denying that Clair brought an alluring palette to all this, the pastel shades have never been matched, as if some black and white had been added to the mix before Technicolor was set upon the spinner. Such blue skies, such dark nights! A narrow divide, though, separates the elegant from the stilted, and farce from the haunting; all this, scene after scene lasting too long, tries the patience, so much so that the delayed result of an off-screen duel is not something to stir one's feelings either way.

For all this, one does keep watching, distractedly.