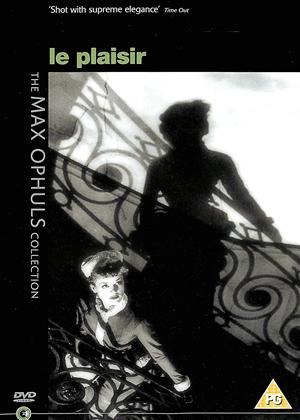 Sign up
L'Atalante and the Films of Jean Vigo

These episodes are set in the late 19th century, from 3 short stories by the great Guy De Maupassant. The central episode, about a group of prostitutes on an overnight visit to a Normandy village is especially delightful. As you would expect from the director [and from Maupassant], conventional expectations about brothels and respectability are quietly but firmly challenged. There's a light but adult touch to it which is very French. [Imagine a British Victorian writing about the same thing ....]

I loved this, and the Blu Ray has some interesting 'bonus material' about Ophuls' techniques and character. The film itself consists of three adapted Maupassant stories, the first one very short about youthful spirits resisting, unsuccessfully, encroaching old age. The second one is probably the one the film is most remembered for in its sunlit pastoral world of Suisse Normande in contrast to the friendly but busy and dimly lit urban night world of a brothel, albeit a respectable one. The storytelling is remarkable for the way the prostitutes' lost innocence is so sensitively evoked. The third story, and not the one originally intended by Ophuls owing to production costs, is a smaller cast and more bitter than sweet. Ophuls' achievement seems to me twofold. First, there's his capacity to conjure mood, especially that of the joy of the moment and the ensuing sense of its passing into memory at the same time as looking for the way of making the best of the moments that follow. The second is his camer work, not restless, but almost always moving and this gives the film an energy, sometimes vigorous, sometimes much less so, even gentle, but always engaging. In this film there is also a very engaging narrative voiceover, inviting you to enjoy being entertained.