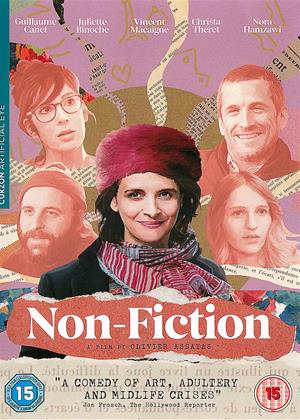 Olivier Assayas’ latest offering concerns the impact of digital technology on media and the arts, literature in particular, although it could refer to developments in cinema also. The film follows two Parisian couples in which the husbands are connected to the world of publishing; there's no 'action' as such, 'just' rounds of conversations on this subject plus such matters as the rise of e-books, and quite a few of those modern Englishisms such as “le streaming,” “post-truth”, “fake news” and “autofiction.” The characters are preoccupied with — and have varying professional stakes in — the enormous changes that have already happened or are just about to happen, and their jobs, (as with their relationships with their partners) are in flux. Whether with grim resignation, shrugging amusement or evangelical zeal, everyone declares that everything is different, everything is new, although now and then, someone will demur: “But some things don’t change.”

In the vast majority of scenes, Assayas stages his arguments about the digital future in bars, restaurants and cafes, over informal dinners or hasty breakfasts, or else, a bit less often, in stretches of pre- or postcoital discourse. People almost always meet at table or in bed, (and in one case both at once). There are maybe 10 minutes in the whole film that don’t involve the immediate prospect of eating, drinking or sex. Hey, it's a French film. The original French title of “Non-Fiction” apparently means “Double Lives,” and the couples concerned dwell in a virtual world of data, social networks and endless quantification, a world that feeds their appetites for abstraction and disputation.

It's either a comedy of adultery disguised as a meditation on the future of civilisation, or the other way round - the fact that the one who works in politics is the least cynical, most ethical player in this game counts as a sly joke. Her job, which takes her away from Paris, gestures toward a dimension of reality that lies beyond the hermetic concerns of the others, but the film doesn't get into this in any depth.

There's some good moments, but it’s also very much a symptom of the condition it diagnoses, namely the profound complacency of the cultural elite (in France here, but of course could be anywhere). And whilst both 'Clouds of Sila Maria' and 'Personal Shopper' kept me engaged with the characters concerned, I found myself not really caring about this lot - you just wish they'd meet some 'real' people and get out of their little narcissistic worlds, and whilst I get that this is exactly what we're supposed to feel and that to react this way is to recognise them, and thus to be implicated their vanity, duplicity, self-delusion & whatnnot, it takes a Woody Allen or a Michael Haneke to bring this off and in the end I don't think Assayas has done so here. So well worth a look but don't get your hopes up.

The review by PD gives a very good account of what this film contains, so I won't go over the same ground.

However, PD misses the satire. Assayas has crafted a merciless satire on the 'demi monde' portrayed in the film, and it is very funny.

The dialogue is witty and there are many genuine insights into cultural trends along the way.

The humour is wonderfully emphasised by the use of Jonathan Richman's 'Martians' song as the final credits roll.

It was an ok film but found it a bit contrived with all the debates on publishing being the key message rather than the relationships. Love Julitte Binoche's performance regardless though!

The review by PD covers the story well for a more rounded discussion!

A film that sums a lot about French cinema. The characters talk, eat, talk, drink, talk, smoke, talk, have sex, talk, meet in bars to talk, got to cafes to talk, have affairs to talk. The main debate is about changes to the publishing industry. The conversations go over and over the same ground. Why can't they change tack and talk about the weather? Of course not this is a French film. Despite all this one gets drawn in to the characters, observing the nuances of their lives.

Some good performances; Juliette Biinoche assured and stylish, Vincent Macaigne slightly over the top comic performance, Guillaume Canet, the epitome of French cool, Christa Theret, a delight and the best from Nora Hamzawi, an honest and compelling performance

An amiable somewhat self indulgent drama set in the Paris literary world and trying to say something profound about the digital age and the crisis of younger people not reading books. Mixed in is that all the characters are having affairs with each other, some are suspected and some doing so with impunity. There are a couple of running jokes and the film is watchable and occasionally draws you in but the film is overall a little weak. Juliette Binoche stars and is always very appealing. Here she is a TV actor married to publisher, Alain (Guillaume Canet). He's refusing to publish emotionally needy author Léonard's (Vincent Macaigne) new autobiographical novel and who happens to be having an affair with his wife. It's all played out in a series of emotional and complex conversations that have some humour but the film finally feels empty.