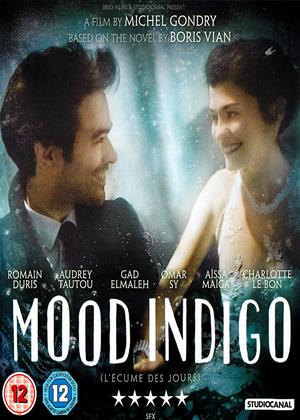 This is not a film for everyone. Fans of the book apparently don't like it. The giddy delight it has in twisting normality will maybe irritate. But I loved it. With subtitles you can't look away, but with this film, every moment can surprise. The doorbell ringing, marriage vows, clearing the table, anything and everything is fair game. It's frothy, silly, yet wonderful. The cast appear to be having a ball as the surprises unfold. Brilliant.

Took a bit of getting used to, wildly crazy visually overloaded experimental fairytale fantasy madness, but good actors so after a while it grows on you, maybe.

The second film starring Audrey Tautou and Romain Duris I’ve reviewed in the last seven days Mood Indigo is as charming and whimsical as Chinese Puzzle if not a bit more bizarre.

Based on the novel by Boris Vian, Froth on the Daydream, which I have never read, Mood Indigo tells the story of a couple very much in love whose strange but idyllic marriage is disrupted when she, Audrey Tautou’s Chloe, discovers she has a water lily growing in her lungs that will, if untreated, eventually kill her. In a wonderful, comic and bizarre twist her husband, the Duke Ellington obsessed Colin (Duris) discovers that the only way to treat his wife’s aliment is with more live flowers.

The above, brief, synopsis is somewhat misleading as there isn’t really a lot of story here, what Mood Indigo really comprises of is a visual symphony of animation, image distortion, CGI, costuming and characterization that culminates in a beautiful and expansive dance that leads the characters through a variety of emotions and themes.

Beautiful, light and almost cartoon-like in its vibrancy the first half of Mood Indigo comes complete with literary caricatures, jazz-star references and post-war contemporary undertones, brought together like a Charleston with the clattering of high heels, the squeals of joy and the cacophony of a live band. The second half of the film takes on a darker element, the water lily in Chloe’s chest suffocating both her and the vitality of the film’s visuals; obviously a conscious choice on the part of the director Michel Gondry, the animation becomes darker, the visuals tinged with grey the music more sombre, all of which perfectly compliment the bizarre narrative.

The performances are spellbinding, Tautou is gorgeous as always, vivacious and lovely in her portrayal of Chloe whilst Duris is an unusual yet adorable romantic lead. The inclusion of the couple’s friend Alise (Alissa Maiga), Gad Elmaleh’s philosopher obsessed Chick and the brilliant butler-come-cook Nicholas (Omar Sy) only serve to further layer this already sumptuous collection of colourful, musical and magical characters.

Though it won’t be for everyone those who like films that transcend the norms of narrative and genre, as well as those that offer a visceral experience and a treat to the eyes, ears and heart, Mood Indigo is going to be one of the best films you see this year.