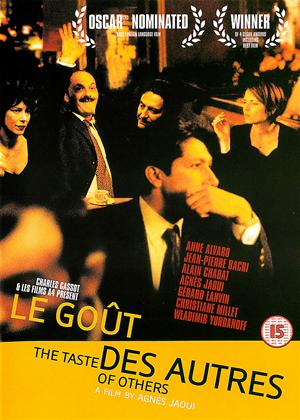 Synopsis:
Castella is a rich but lonely man. He has built up a successful business but has lost sight of himself, his wife and his family in the process. Clara is a middle-aged actress who lives for the theatre but craves for a family and some security in her life. Clara teaches English in her spare time and this is how she meets Castella. There is no obvious attraction at first but when he just happens to see her perform in the theatre she triggers something inside him. Castella begins to pursue her aggressively, attempting to break into her social circle and even shaving off his moustache.
But it into her social circle and even shaving c is only when he leaves his wife and becomes more considerate and sensitive to the people around him that Clara begins to have feelings for him.
Actors:
Anne Alvaro, Jean-Pierre Bacri, Alain Chabat, Agnès Jaoui, Gérard Lanvin, Christiane Millet, Wladimir Yordanoff, Anne Le Ny, Brigitte Catillon, Raphaël Dufour, Xavier De Guillebon, Camille Andraca, Céline Arnaud, Robert Bacri, Marie Agnès Brigot
Directors:
Agnès Jaoui
Writers:
Jean-Pierre Bacri, Agnès Jaoui
Aka:
Le Gout Des Autres
Studio:
Pathe
Genres:
Comedy, Drama, Romance
Countries:
France, Comedy, Drama, Romance

Reviews (3) of The Taste of Others

Initially, a depressing view of people's behaviour - The Taste of Others review by SoniaGee

I will not give any detail here, but this film has much within to make it an outstanding achievement.

Intricate and enjoyable film - The Taste of Others review by RD

This starts, like many French films, with what appears to be a slow, disjointed plot. It's interesting, but there's not many signposts as to where the film is going until about halfway when the various isolated characters interact, the story opens up and the whole film takes shape. From there until the ending there is a wonderfully comprehensive display of how relationships that shouldn't work actually do, and how those that should work, don't.

All the acting was of a very high standard, and the film was technically well made..

Watch this clever and enjoyable film until the end, it will leave a good impression.

My wife and I both loved this. Its hard to describe the plot without giving too much away but in the end the best man wins the girl; it is just not always obvious who the best man is. The romance weaves around various characters until it settles on the romantic at the heart of the film. I had a smile on my face from start to finish.