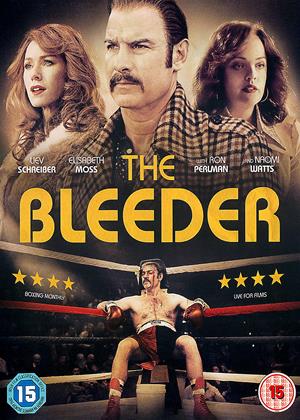 Reviews (2) of The Bleeder

This is the Life Rocky was Based On - yes it was Mr Stallone, it really was. - The Bleeder review by DS

Chuck Wepner is a ‘club boxer’ he’s the Bayonne Bleeder. After a few fair to middling fights the stars shine down on him and he gets a chance at the World Championship against Muhammed Ali. The fight is expected to be a non-contest but Chuck can take a punch and doesn’t give up. He goes fifteen rounds and this makes him instantly famous and a hero to many. Elevated to the man that took Ali to fifteen rounds and despite being the inspiration for the Rocky film series, Chuck starts on a path that is going to cost him his family and eventually his freedom. Will there ever be redemption for Chuck, will his life pan out like the movies and end up happily ever after?

The story of Chuck Wepner needed to be told and it needed to be told in the this more realistic way rather than the bleached and neatly folded Rocky which is based on his life – yes Mr Stallone it really is and it is really obvious.

It’s difficult to make a film about a selfish a-hole but make you feel sorry for him, make him sympathetic but director Phillippe Falardeau has done this along with the not inconsiderable talents of Liev Schreiber. In his hands, Chuck appears to be aggressive and definitely in love with fame throughout the film. Not the greatest of attributes in a person but somehow during the running time you don’t think ‘Chuck is a dick I’m glad this is happening to him’. You can sympathise with Chuck but equally, you feel full empathy for his first wife Phyliss and his daughter Kimberley as they traversed the waters of the hurricane known as Chuck Wepner before they finally abandoned ship.

The look and feel of the seventies, spliced in with genuine footage is spot on without looking stagey or false and the idea of the protagonist’s spoken narrative whips the story along at a pace. After all, a lot of Chuck’s later life must have been an utter blur and no one who was there can probably remember it.

It is a truism to say there is nothing new in The Bleeder that you haven’t seen before, many celluloid characters have tripped down the path of excess that leads to ruin. This story is true and doesn’t too clean and sanitised for its screen outing. It has an interesting take on jail-time too and the ‘scales falling from his eyes’ moment is handled without much fanfare and did not neatly wrap up the story in happily ever after but told the truth of how these situations can play out.

Husband and wife team Schreiber and Watts real-life chemistry easily transfers to the film and the whole story is better for it and further to this, the easy chemistry between Elizabeth Moss and Schreiber makes the story much more believable from the start and helps to draw into the story. Schreiber is the main star and figure and his shoulders take the strain easily he is supported in his endeavour with some consummate ease by reliable stalwarts Ron Perlman, Jim Gaffigan and Michael Rapaport it’s an enjoyable ensemble.

This film must have been a labour of love for Liev Schreiber as he had a finger in nearly all the pies, starring, writing and producing and that love for the story, for the fragile human at the centre shows through. There’s no judgment of his ways, of his idiocy and throughout Chuck’s highs and lows., The Bleeder shows the simple honesty humanity of all the main characters. This is a film more people should see, this is a film Liev Schreiber should be proud of.

Sometimes life is like a movie. And sometimes it’s better.

Chuck Wepner went 15 rounds with Ali. Stallone who was at the fight was inspired to go home and write Rocky in three days, so the story goes. What is undisputable is the fact that this fight did give Stallone the creative idea for Rocky.

Liev Schreiber gives an outstanding performance as Chuck Wepner, a hard as nails, stop the punches with his face, pro fighter, who gets a shot at the heavyweight title of the world.

The brilliance of this film though is the portrayal of the total mess up of a man (euphemistically speaking) , which Chuck in his own words is. His downward spiral through drink , drugs and womanising is heart breaking, as he loses all the people who love him on his road to oblivion. Simultaneously though, there is something really loveable about this big tough guy, who seems a genuine man underneath it all.

Great performance from Naomi Watts as his love interest, with great chemistry between the two.