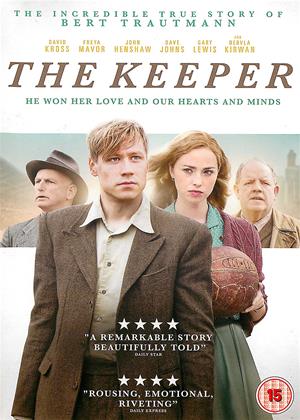 Took me back to my youth - The Keeper review by AA

when my paternal grandfather initiated me to become a life long fan of Manchester City and I can still remember where I was watching the 1956 Cup Final on a friends television.  The film clips of Maine Road with all those people standing and roaring the team on to do their best again memories.  I did enjoy enjoy the film and the events that led! to Bert Trautmann becoming the star player he was!

Sugar-coated, over- dramatised, populated by drama school drop-outs, child-like dialogue. The only good bits were the archive clips of real football games.

A human story - The Keeper review by DM

Even if you don't have any interest in football, but more so if you do, this film is about the Manchester City legendary goalkeeper Bert Trautman, it is a wonderful human story. It shows us how Bert, who was a German Paratrooper, and who was awarded medals including the iron cross, and whom is captured and placed in a POW camp in Britain. The story goes on to show us how he went on to become one of the greatest goal keepers and won over the hearts of the British Public. It is moving, absorbing and very well acted.

The Keeper - a goalie with a German sounding name, but it wasn't about me. - The Keeper review by DS

The Keeper is a good entertaining and uplifting film. It is the usual fare of film-maker wanting to entertain and a ‘true-story’. As far as I can tell the basic building blocks of the real-life story are there but last ‘fairy-tale’ moments from Bert’s life have been airbrushed out or not included. Thus it ever was before and so it will be in the future real-life stories in the cinema.

Getting past this, and some people cannot, you have to make sure you have an interesting, well written and acted story instead, the trips along and keeps you invested in the tale. The Keeper does this. German actor, hoorah a German playing a German no cod-accents here, David Kross is a handsome, charismatic presence on screen and gives Trautmann a grounded story, he’s no angel here but most importantly was not a Nazi, was there any in Germany, was it just 12 men in that whole country that were Nazis? To be balanced neither is he a goody-too-shoes but the audience is forced to sympathise with him, giving him nightmares about the appalling treatment of a Jewish child, the deaths of his comrades and so forth – it is somewhat heavy-handed at times.

Nevertheless John Henshaw comes in playing Northern Man and boy is he reliable solid and so believable at it and for once the ‘northern English folk’ are not tired stereotype ecky-thump types but ordinary people living in the north of England. The football scenes are surprisingly realistic for film football scenes, not a high bar but at least the snippets you get it does look like players are trying to stop their opponents scoring rather than falling back like the Red Sea when a player approaches them.

Freya Mavor as Margaret, Trautmann’s first wife (never revealed in the film), is given a great role, and is impressive as the free-spirited, tough, northern lass, whose heart is captured by the boyish charm of goalkeeper Trautmann.

The football recreation is a small part of this story, so don’t worry if you do not like football, the balk of the drama is taken up with the problems of Bert being a German prisoner of war staying in the country he was ‘at war’ with and taking on every prejudice, bias and hurdle placed in his way whilst falling in love and marrying an English girl along the way. As often happens in the life of people who are successful things happen to seem to take away their happiness or ‘test’ them. In real life this really happened to Trautmann and his family and it was no writer’s conceit.

The Keeper, or Trautmann in some markets, is a well-made film in every department, writing, acting, directing, filming, all round it is good. Some of the dramatic constructs are glaringly obvious and a bit ham-fisted at times and being ‘true to life’ it is not strictly ‘true’ but overall it is an entertaining and engrossing film about a really interesting character in a time when intolerance and prejudices had to be overcome – thank goodness that’s changed.

Surprisingly good and worth watching - The Keeper review by WM

I had no real expectations of this film but soon found myself drawn in to how the story was unfolded.

The acting was superb and the story telling compelling.

Once the film was complete and the credits rolled, I realised this had been a very good film and one which I would recommend others watched.

Interesting enough but not memorable - The Keeper review by TH

This was an interesting film that tells the story of a German goalkeeper becoming a football icon. The story is quite simple and despite being watchable I wouldn't say this is a classic true story film. The acting is decent and you wont be bored but I doubt many will remember it after watching.

Did not have high hopes as I hate war movies and I also hate football so the combination did not bode well for this film. However it is well done and struck a balance that I could cope with.

The base of the story is true. I checked it out afterwards and it seemed pretty factual. The romance is of course layered on so who knows what is true there but it didn't matter.

There is also the fact that they made him a sympathetic character, from what I've read if they depicted him as he really was then you would not have liked him as much and been routing for him. Stories like this always embellish to produce a rounded story.

We didn't have massively high expectations, expecting lots of sentiment and no grit, but this was better than that - a classic love across difference in some ways, but also tackling the fury of football fans to have a German in the team, the legacy of the war on both sides, and great performances

A fantastic, heartwarming film about this super Man City goalie - The Keeper review by giantrolo

We loved this film, and loved it even more once we found out that it was based on a true story and person! A fantastic portrayal about the hardships of re-establishing Anglo-Germany relations in the wake of World War II, and the prejudices and deep emotional trauma that had to be overcome on both sides. A lovely ode to the healing power that sport has to bring people together. Even though there is football in this film, it is by no means pitched exclusively at football fans. In fact, it was a very accessible film that I think almost everyone will like. Highly recommended!

It was great to watch this, knowing it was based on true events, with two others who had no idea it was based on a real person. As it became clearer that it was true, it was more engaging. Yes, sure, there was emotional manipulation, but the story was (is) so amazing it is well worth telling. The football matches were effectively recreated, and the relationship at the core felt real. Everyone who didn't know the story immediately googled "Bert Trautmann" afterwards and were amazed. A story worth telling, for all sorts of reasons.