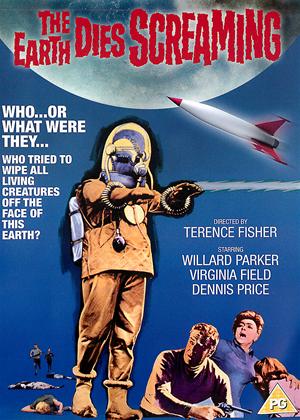 Reviews (3) of The Earth Dies Screaming

Look Out for the Blue Peter Robots and You Should Be Fine. - The Earth Dies Screaming review by DS

Made in 1964 The Earth Dies Screaming is a black and white small-budgeted science-fiction/horror thriller about mysterious invasion. Shot in around three weeks the film focuses on seven survivors and how they cope with the strange and deadly event they survived. Willard Parker and his wife Virginia Field are the ‘stars’ that were brought in, and most likely where most of the cast salaries went, although at the end of their careers, they were soon to move into a successful real estate business, they were big enough names to give the film a passing interest for the audiences of the day.

The ace in the pack for The Earth Dies Screaming is Hammer Horror stalwart director Terence Fisher, a man who made a living on managing small budgets and wringing horror and tension from situations that the money would not allow. He followed on with two similar films Island of Terror and Night of the Big Heat that had near identical premises but had slightly larger budgets. Whatever you think of this film and any of the others he made around this period you must admire the man’s ability to deal very successfully with what he had and to make interesting fun films.

At just over an hour in running time the who film is never going to wear your patience down because before you know it the odd ending is playing out in front of you. The opening scenes, showing the aforementioned train derailment, plane crashes and people dropping dead, is snappy quick and lets you know what has happened if not why. In fact, this is a strength, rather than bog us down with convoluted explanations and exposition as to what is happening, like Jeff and has new friends you never know, you are only privy to what they know – and that is not much.

The characters are set up quickly, so the audience knows who is who and what is going to happen. Parker is the solid and dependable de facto leader and Dennis Price, in the middle of his downward spiral of alcoholism and guilt over his career and homosexuality reducing him to roles and films like this, is nonetheless superb as the slimy and clearly, but never revealed, criminal Taggart. Thorley Walters a mainstay of classic British TV and films rolls up as the drunken fool to great effect too. The three female cast members are obviously restricted to the standards and expectations of the day but they do well with what they have and Virginia Field especially with the little she is given that does not involve making meals or being terrified.

The actual fear and tension build from the mysterious robots that turn up at the halfway point. For all the world they look like something made on the set of Blue Peter but that is half the fun of the action, but then, four years before Night of the Living Dead, the robots make the corpses into zombie-things, with plastic lenses glued over their eyes. Despite the laughs that can be got from their appearance they are eerie and scary as they creep around hunting down the remaining humans.

This is a harmless piece of schlock made in the sixties and should be watched with that in mind. If you like to see into the past of Britain looking at the old cars and refrigerators then you’ll enjoy it, if you are looking for terrifying horror-action this is the wrong film, but it is a fun effort – think an old episode of Dr Who that was lost but has been found again.

Eyeball to Eyeball - The Earth Dies Screaming review by CH

As The Earth Dies Screaming (1964) opens, one scene cuts rapidly to another as people keel over, a train-driver dies at the wheel and the carriages go up in flames as they fall from the track, a plane falls from the sky – and more. All falls quiet after a while, and we infer that others have met the same fate elsewhere, perhaps across the world: a few survivors, who meet by chance in a Surrey village, are unable to get any radio or television signals.

Some claim that is the very adjective for this film. This is to underestimate its effect. As an American test pilot, Willard Parker, comes to realise, all of them were out of range of whatever gas killed the population (he was high in the air, for example), another was in an oxygen tent; a married couple, on the point of having a baby, had been in an emergency shelter.

Panic and resolve are the uneasy partners as the group holes up in an inn, and look through the window as one of them, foolish enough to flee, is greeted and exterminated by a pair of tall, robotic figures.

By now the quiet has given way to Elizabeth Lutyens's distinctly effective music while director Terence Fisher keeps a steady hand on the pace of this black-and-white world. Much the best known of the cast is Dennis Price, a tweedily enigmatic figure determined to make a bolt for it while keeping up an air of pompous rectitude.

Many a moment springs a surprise, gore is restricted to the eyeballs of the posthumous – say no more. Scoff at one's peril; chances are that any who watch this – it is but an hour – will shudder more than they expected.

No budget C Movie. Great title. The aliens could have been created by scouts for the Gang Show. But still watchable and reasonably acted.