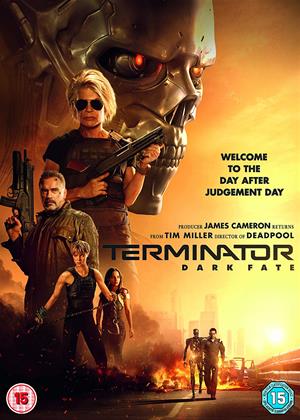 Dark Fate is a tough entry to champion in the Terminator franchise. There’s certainly a new take with this sixth film in the saga which gives more focus on the female characters, shifts the battle Mexico and Texas, and never shuns from going exceptionally violent or vulgar in order to be more serviceable as PG-13. It’s just a shame that all of this is more of putting on a different coat of paint on the same old vehicle. While Dark Fate certainly looks good on its surface, its story is of familiar parts under the hood.

It’s pretty clear that director Tim Miller is going for more of a feminist angle and this is at least refreshing. We follow Dani, a young Mexican working at a car factory. She lives with her single father and works alongside her aspiring brother. Their jobs are being replaced by machines but there’s no time for that bit of social commentary! It isn’t long at all before two time-traveling machines are bounding towards her. There’s Grace, an augmented human who wants Dani to live, and Rev-9, a stone-faced advanced Terminator that wants her dead. After a quick and violent introduction of both, they’re all bound for an expected car chase and a battle at a powerplant. Deja vu.

Further perpetuating the whole same-story syndrome of the Terminator franchise is how this entry fits into the series. In this sixth chapter, Sarah Connor (Linda Hamilton) had stopped Skynet after the events of Terminator 2. With Skynet out of the picture, thus enters Legion, a company name so bland and forgettable it’s no wonder the film never steers towards where this organization exists. Do we even care? I hardly cared about the corporation of Genysis from the previous entry. It’s not a stretch to imagine what they’d be like or up to in their end-of-the-world tech.

Don’t get me wrong; Hamilton returns in top form as the ultimate badass of the film, showing up with big guns and grenades in hand to handle the onslaught of Terminators. She brings a real sense of grit to the franchise that hasn’t been seen in some time, as well as having the most personality. It’s easy enough to understand why she takes top billing over Arnold Schwarzenegger, who has the least amount of screentime in the picture as a retired T-800. Arnold more or less returns to the deadpan role but in his old age, his version of the Terminator is more akin to that of Kindergarten Cop, the way he sternly speaks of changing diapers and interior decorating.

The action sequences are certainly big and spectacular but haven’t they always been? Genysis saw a bus flip over on a bridge and featured a helicopter slamming into a skyscraper that burst into flames. I can’t deny there’s still a twinge of excitement when Grace slams factory equipment on the Rev-9 or when the T-800 shoots the villain in the face with a machine gun. And yet these scenes carry so little when the characters are not given a lot of depth in a story with so many spinning wheels. In addition to the automation aspect never being fully addressed, there’s another scene of the heroes and villains duking it out among a border patrol detainment facility. Nothing much is touched on here unless you really dig watching an evil robot dice up some corrupt officials. And, hey, didn’t we kinda see something similar in both Terminator and Terminator 2 with a breakout sequence. Deja vu, indeed.

Dark Fate undeniably has grit and it’s fun to watch Hamilton become an aged action hero. It’s just too bad this is more or less the same story with a few interesting changes. The Mexican and feminist angle is certainly a unique one but must it be pointed out literally that the Terminators are after the womb? Those themes were most present in the original film that it’s very jarring to have everything plainly spelled out here. This surface-level nature just goes to show how the Terminator franchise still has lots of styles but is dwindling on ideas.