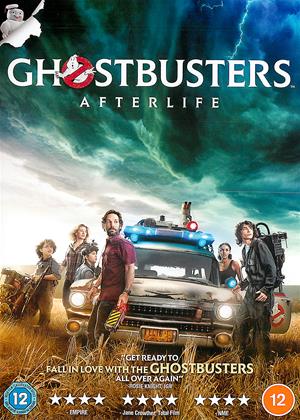 The first half is a warm wallow in small-town Americana with some of the snappiest dialogue you’ve ever heard on film. The best lines are given to Mckenna Grace and her pal Logan Kim – kids who are not the usual Hollywood brats but intelligent and funny. The adults have some witty lines too. It’s fun until, this being part of the Ghostbusters franchise, it develops into a silly cgi-fest. There’s also a mawkish ending that pays homage to the original film and completely skews the essence of the first half.

Ghostbusters 4 - Afterlife puts the tormented souls of 2 and 3 to rest...but - Ghostbusters: Afterlife review by AER

Ghostbusters 4 - Afterlife may put the tormented souls of 2 and 3 to rest but this is because it plays a very safe game - It's 100 % fan service. So well-versed are Hollywood-execs at producing films that answer to internet speculation and spoiler-addicted fans, this Ghostbusters entry offers the viewer nothing new. Imagine Super-8 (or Stranger Things) thrown into a blender with Ghostbusters 1 and you're there (and you've probably used about the same amount of imagination as the execs who created this). In playing it safe, the film is actually entertaining and occasionally funny. It's light entertainment and has some fab SFX - it's streets better than Ghostbuster 2 and 3, so at least this does well to re-align the series and make it watchable. The first film casts a very long shadow over this one, and as a consequence, it will end up being fairly unmemorable which is a shame because the error teaser trailer promised us something a bit deeper, a bit more interesting, and like the original something unique. To these ends it barely scrapes a pass mark.

It could be said that Ghostbusters: Afterlife is pandering to the ultra-fans and old people who, now arthritic and grey, long after the original Ghostbusters. True the set-up follows on from the previous story and a not-to-surprising reveal at the end brings us full circle. The observant will notice set pieces and effects as clear and obvious nods to the original but come on folks, Ivan Reitman is the original director’s son, so to some extent it is in his blood. After the huge pile-on for Ghostbusters [2016] some of which was deserved but a lot of was extremely vindictive the makers of ‘Afterlife’ saw what happened and could have been forgiven for making a simple update treatment like Disney Star Wars sequels – rinse and repeat and keep the disgruntled happy.

Ghostbusters: Afterlife is not a simple repaint of an old ship. If you watch the beautifully crafted and framed shots, vistas as wide as a fan’s smile, gorgeous set-up scenes bathed in beautiful golden ethereal light, exquisitely captured and directed by cinematography Eric Steelberg, you could be forgiven if points thought you were watching an entirely different type of film. I was mesmerised by some simple scenes. To add to this many horror filmmakers would do well to watch this film to see how some scenes that are ‘scary’ do not need to be shot in murky unwatchable dark. To say I was impressed by this aspect of the film is an understatement.

Simple said Ghostbusters: Afterlife is a heartfelt and splendid love letter to the original duo of films. You can see it in the top-notch casting, the coherent story and the enormous sense of fine the runs throughout the running time.

The film builds up the story slowly which allows good character development, so you know who is who and why they are there. All along the way we have clever Easter eggs to the original story and characters, with one of my favourites Annie Potts popping up early on.

To the credit of the makers, the film does not overly rely on too much CGI and on-screen effects and for some of the criticism levelled at this take on Ghostbusters I just cannot see this as a rehash or reboot but a careful attempt to continue the story, or legacy if you prefer, of the original films.

There are touching moments throughout and although the ending seems a bit rushed and too on-the-nose Ghostbusters: Afterlife for me is a well-made slice of love to the original films, with very good casting and acting and some stunningly simple and beautiful cinematography that takes it above and beyond a simple love-letter, which it is, to those 1980s films.

Quite simply Ghostbusters: Afterlife is enjoyable fun but with that extra polish and sparkle that takes it beyond the run-of-the-mill.

I really liked it.

Ghostbusters: Afterlife is likely to gain the easy comparison of being The Force Awakens of this saga. It draws a lot from the original film and characters but also tries to pass the torch as a soft reboot of sorts. That is indeed what is going down within Afterlife but it is nowhere near as compelling or even clever as The Force Awakens attempted to reignite the familiar sensations. The Force Awakens features another Death Star but it’s at least bigger and leads to Harrison Ford getting in the funny line “How do you blow it up? There’s always a way to blow it up.” Afterlife features the villain of Gozer returning and saying the exact same lines he did in the first film.

How could this film have fumbled so hard? It had an opportune moment to bring something new to the table. It’s the first Ghostbusters movie to go outside a city and take the comical ghostbusting antics into a small town. Sure, it feels like the film is more trying to be an Amblin-style picture than the shlubby comedy Ghostbusters was known for, but it’s a solid route if you’re planning to center the story around kids. Teenagers Phoebe and Trevor are the new kids in town who kinda/sorta struggle to get along. They’re underdogs but seem to find the right friends early on with their courage to carry on. Finn Wolfhard as Trevor and Mckenna Grace as Phoebe are fantastic actors and once more bring ease to their performances.

The problem is they just don’t have enough scenes to get to love them. Their arcs feel so minor when they’re pushed into the roles of Ghostbusters rather quickly. Some strange occurrences around the house lead to Phoebe just kinda going with the flow of a possible ghost playing chess with her. She will later venture into the basement and discover that her grandfather was a Ghostbuster, leaving behind loads of secret tech for combatting the supernatural. Trevor will also discover the Ecto-1 in the garage and merely regard it as a piece of junk that he has to fix. It won’t be too long before they’re busting ghosts.

The ghostbusting itself is not too shabby. The best scene in the film features Trevor driving the Ecto-1 around town while Phoebe sits in a gunner seat, firing a proton pack at a fleeing ghost. Scenes like that are great in their staging and make one wish that there had been just as much faith in that scene as there were for the rest of the script to take off on its own. Unfortunately, that is not the case for Afterlife, as the ultimate showdown is exactly the same as it was in the first Ghostbusters film. Same villain, same events, same scenes, and even some of the same characters.

The nostalgic Easter eggs are pushed to absurd lengths in this picture and rarely with anything all that interesting to say. Paul Rudd plays Gary, the most eccentric of the central cast and an avid Ghostbusters fan. So why does he feel so subdued when he finally gets a chance to open a ghost trap or touch a proton pack? He’s at a loss for words and I can only assume his inability to make a good joke is meant to be interpreted as awe. And I can only assume that was the intent for the rest of the references, where the joke of a Twinkie in the glove compartment or a classic commercial is meant to be amusing because you recognize them. This also leads to one of the tackiest usages of CGI to recreate actors, despite the heartfelt nature.

Ghostbusters: Afterlife does little to differentiate itself from the myriad of other franchise retreads that have nothing interesting to bring to the table. It’s a glorified Easter egg hunt, admitted as much by the director. On that level, sure, I guess you could view the film as a game, treated as some homework cred for the trivia-obsessed geeks who dream of a Ready Player One utopia. But if you’re seeking more than mere Ghostbusters references, this film has so little to offer and is easily one of the worst entries in the Ghostbusters franchise.