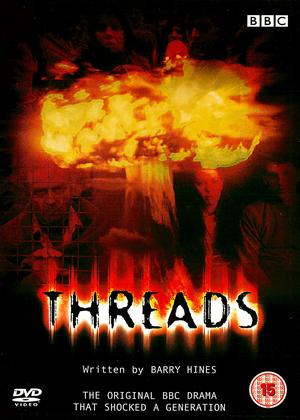 If you've always wondered what actually would have happened in the event of a nuclear holocaust in the UK in the early 80s then this is the film you've been waiting for. It was clearly well researched and there is great attention to detail. Some often acting is a bit wooden and the script is pretty pedestrian but the imagery is of its time it is very effective and brings the grim reality of nuclear war to life. Not a great date movie though...

Happily Threads will be seen as a frightening might have been. It tells the story of two ordinary famlies who live in Sheffield and will be united by an impending marriage of their children. However the world is sliding towards a nuclear confrontation over a crisis in the Middle East. There is also an interesting sub ployt about local government and civil defence. Ultimately the modest budget begins to tell in the second half and the film relies heavily on stock footage. It is however an untterly unforgettable chilling experience that once watched will never be forgotten.

This early effort by Mick Jackson, he of The Bodyguard. LA Story and errr, Volcano, fame is a more battered, scratchy, affair made on a budget with an edgy kitchen sink realism about it. The story and point being made are all the better for it.

We are treated to a washed-out aesthetic as everyone in 1984 Sheffield go about their lives. Drinking down the pub, shopping, going to work. All the time in the background, through the realistic medium of newspaper headlines, Lesley Judd of Blue Peter reading the news and radio announcements the creeping disaster that is the whole point of the story edges forward. It is clever and works well. The realistic drama style is somewhat counterpointed by a documentary feel with on-screen text telling us where we are in the timeline. I am not sure whether this works or clashes with the fictional tale and days after viewing I still cannot make my mind up.

Probably due to budget restraints, but I think also for realism, Jackson used a cast of relative unknowns, and all involved give great showings as ordinary people caught up in extraordinary circumstances. Great writing gives all the main characters little knowledge or interest in the event unfolding, until things start to get out of hand. To balance this, we are shown the leader of the council who is designated the emergency manager being told to be ‘be ready’ to run the local area in the event of a war. It is this strand of the narrative that arguably gives us the weakest part of the film when later on we do get treated to some very stagey histrionics in the ‘bunker’ under the town hall, it is not ‘11’ but it could have dialed down a bit methinks.

Part of the morbid interest is to see what happens once the war starts, who survives, who makes errors, who is wiped out. If there is any criticism, I think Jackson and the writer, Barry Hines, who wrote A Kestrel for a Knave, so definitely knew about the northern working-class realism, were too optimistic, allowing more than a few characters to survive the initial blast. The events prior to the strike are mundane and ordinary to the point of the opening set-ups perhaps starting to drag. The unfolding news flashed about Iraq and the oilfields are both realistically made and very slowly rack up the tension.

The events of the nuclear strikes and the results no doubt were horrifying to audiences at the time but once again I cannot help feeling that the real circumstance would be more terrifying and apocalyptic and of course Jackson was certainly hamstrung by costs.

If I have any major criticism the tale of Ruth carries on way too long after the events and we are projected too far into the future and so are greeted with pure fiction and speculation. It is as if the story was pivoting around nuclear strikes on the UK but once that has occurred, the devastation is framed, highlighted, then air gets let of the tyres and we trundle to the end.

Nevertheless, is this a small complaint and if you are lucky enough to view this, not only do you get to see Reece Dinsdale in an exceedingly early role but probably the best ‘realistic’ film made about a nuclear war out of the small crop of films the popped up around and after it came out. Even today, outdated as it is, it still packs a punch.

A film that should, but never will be shown to older school children and all MPs every year. It never will because no one in power wants to people to know they are going to burst into flames or die from radiation sickness after a war that no one wins, and certainly can you imagine