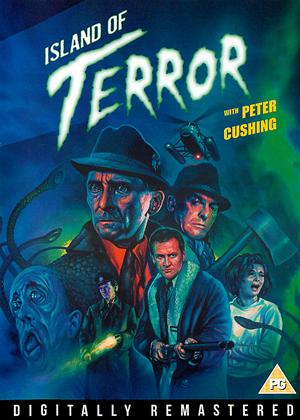 Sign up
Journey to the Far Side of the Sun

Reviews (1) of Island of Terror

Planet Film Productions, who distributed (as far as I can tell) a total of six films, beginning in 1951 and ending their run with this, have put together a good, solidly made production featuring an scholarly Peter Cushing. Also, amidst the nicely creepy locations beautifully captured by director Terence Fisher, are the reasons for the ‘terror’ extolled by the title: b-movie style slithering ‘Silicates’, long-necked snail-like creatures that move around with staggering slowness. These monsters either destroy the nicely conveyed spooky atmosphere, or provide a somewhat silly high-point among the serious faces and long coats – depending on your point of view.

The bodies of a series of murdered humans/animals have one gruesome thing in common: their bones have been liquefied, leaving the cadavers ‘all soft and flabby.’ Dr. Bryan Stanley (Cushing) and his authoritarian gang Drs David West and Reginald Landers (Edward Judd and Eddie Byrne) investigate, together with Toni Merrill (Carole Gray) – who has constantly to fight against their ‘stay here, things might get dangerous’, and then screams in terror whenever they are confronted by the Silicates. Girls, eh? The actors do a good job of staring in terror at these wonderfully daft creatures, who occasionally exude slimy spaghetti when attacked. Gray in particular does her best with Merrill, who looks pretty but is written as the wilting female who needs to be looked after.

Terence Fisher doesn’t make much of effort to make these monsters look particularly terrifying. A couple of zoom-ins, otherwise it seems to be a case of ‘point the camera at them and let them get on with it.’ (“They don’t seem to be moving very fast,” Stanley says at one point.) And yet the briefly seen boneless corpses are very effective, as is the depiction of something unpleasant happening to stoic Dr. Stanley’s hand toward the end, which is genuinely shocking.

Overall, this is good fun. The island setting is authentic and the sets are packed with convincing rural detail. It remains a lesser-known Peter Cushing film, however. “We were lucky this is an island. If it had happened anywhere else, I don’t think we would have been able to destroy them,” says West shortly before the film ends with an ominous final scene. Tremendous.