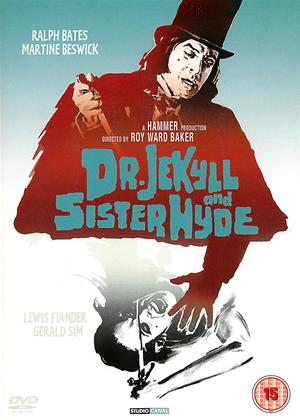 Synopsis:
Professor Jekyll (Ralph Bates), an earnest scientist, obsessively works day and night haunted by the fear that one lifetime will not be enough to complete his research; sidetracked from his objective he becomes consumed with developing an immortality serum. Once convinced his findings are complete, he consumes the potion only to discover that he is to become two as he turns into half Jekyll and half Hyde. Desperate to cover up his new found identity he calls her his sister, but things take a turn for the worse when he realises that he needs female hormones if he is to maintain this existence. Before long he is battling with his alter ego Mrs.
Hyde, as a number of young girls begin to go missing in the streets of London...
Actors:
Ralph Bates, Martine Beswick, Gerald Sim, Lewis Fiander, Dorothy Alison, Neil Wilson, Ivor Dean, Paul Whitsun-Jones, Philip Madoc, Tony Calvin, Susan Brodrick, Dan Meaden, Virginia Wetherell, Geoffrey Kenion, Irene Bradshaw, Anna Brett, Jackie Poole, Rosemary Lord, Petula Portell, Pat Brackenbury
Directors:
Roy Ward Baker
Producers:
Brian Clemens, Albert Fennell
Writers:
Robert Louis Stevenson, Brian Clemens
Aka:
Dr Jekyll & Sister Hyde
Studio:
Cinema Club
Genres:
British Films, Classics, Horror, Sci-Fi & Fantasy
Countries:
UK

Rent other films like Dr. Jekyll and Sister Hyde

Opening with the least horrific music you could imagine, it seems as if this parody-sounding film could lean towards the comedic. Luckily, however, it isn’t long before bright red blood spatters one of the many posters offering rewards of £200 for capture of the Whitechapel Murderer, a top-hatted fiend who carves up the bodies of prostitutes.

Wearing long hair that would be deigned decidedly foppish for the Victorian period, Ralph Bates is terrific as the driven Jekyll. His caddish friend, hopeful womaniser Professor Robertson (Gerald Sim) and a scowling Welsh cockney Philip Madoc underused as the low-life Byker flesh out interesting supporting characters in a story that not only acknowledges RL Stevenson’s original tale, Jack the Ripper and Burke and Hare too! What drives Jekyll here is the knowledge that his good work will be curtailed by his own eventual death, and so sets about discovering the elixir of life. For that he needs body parts, and therefore the services of the two lecherous scallywag grave-robbers.

This is rich, confident story-telling. It is also Director Roy Ward Baker’s best work for Hammer in my view. His sprawling depiction of fogbound London is all the more impressive when one discovers the entire project was filmed in the studio.

Of the female performers, Bates’ future wife Virginia Wetherall plays typically doomed prostitute Betsy, and Susan Brodrick portrays the neighbour who has a crush on Jekyll, Susan Spencer. Brodrick is delightful in a role that could have been irritating and obsessive. Instead, she is appealing and simply naïve, leading to some terrifically witty scenes with the woman she assumes is Jekyll’s wife – but who is really Jekyll himself. The mighty, sultry and magnificent Martine Beswick is electrifying as his female alter-ego, the unexpected side-effect of his experiment. The transformation scenes are simple but cleverly effective, achieving the first change in one single take. That Howard Spencer (Lewis Fiander) is instantly besotted with her is entirely understandable (leading to an awkward later meeting between Howard and the male version of the doctor). His/her delight at his/her new body is fabulous, as is Susan’s crushed response to hearing ecstatic female laughter coming from Jekyll’s room.

So enjoyable are the lead performers that it is a true shame they are so inherently evil and therefore doomed. There is a scene when Bates is sweatily hacking away at a new corpse in a backstreet, entirely unaccompanied by anything other than the sounds of distant industry, which is very effective.

This remains one of my favourite Hammer films. It is beautifully written by Brian Clemens, played by actors with a slight hint of irony, but emerges as a tragic tale. The inevitability in which evil-doers must die especially when their evil is so entertaining is a necessary evil in itself. Whilst not really frightening, ‘Dr Jekyll and Sister Hyde’ is steeped in atmosphere, has some pleasantly gory moments and deserved a vastly more widespread reception at a time when Hammer films weren’t attracting the crowds they deserved. If it had been released during the company’s heyday, it would have been a monster.