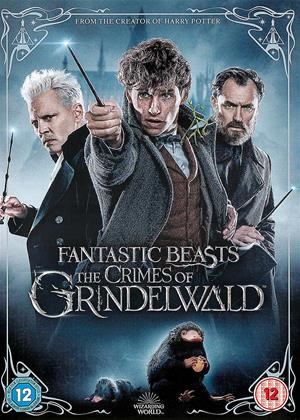 Reviews (11) of Fantastic Beasts: The Crimes of Grindelwald

What is the point of it all?! - Fantastic Beasts: The Crimes of Grindelwald review by CS

Whilst the Harry Potter series were fantastic, well thought out and brilliantly presented, with each film being strong enough to stand on it's own. This (not so) Fantastic Beasts series is fast becoming a clone of all those nasty Marvel movies out there, created purely for the money, with no or very little creative or artistic merit and constantly creating endings that link to the next movie in the franchise! Eddy continues his annoying portrayal, coming across as more autistic than shy and never looking at you or whoever he is talking to! Un-necessarily linking this into the Harry Potter/Dumbledore/Hogwarts characters also spoils it in a way and would have been much better if they had concentrated on leaving Harry Potter out of it completely. The CGI in the opening action sequence is really messy, it's so all over the place and difficult to see what is actually going on. Johnny Depp doesn't really bring anything to the film and neither do any of the other actors or characters in the film, with the one exception of Jude Law, who whilst slightly miscast, does appear to at least make an attempt! What made Harry Potter so special and so successful was that it was mostly a British affair, employing strictly British or European actors and making no attempt at all at pandering to an American audience. Sadly the Fantastic Beasts series appears right from the start to be pandering almost exclusively to an American audience and even when the story is relocated to Paris and London, it still cannot shake of the Americana of it all! This is not a good sign of things to come with this series and with more in the planning, I shan't hold my breath!

This film never once got my attention. Dire script throughout combined with unnecessary CGI. I cannot remember one of the characters, I don't want to , to be honest. This bears no resemblance to Harry Potter at all , I don't know if it is supposed to. Choose something else.

Special effects were quite marvelous.. We were impressed!

However, Eddy Redmaines' demeanour came across soooo annoying! His portrayal of his character, the way he talks.. its like he learned to simper, and speak in such a quiet, styalized fashion that you want to shake him by the shoulders, and tell him to WAKE UP!!!

My wife and I are of reasonable inteligence, but enjoy relaxing watching a film which is'nt so taxing on the brain!

The storyline is soooo complicated!! We repeatadly kept having to ask each other, what was going on.. Until we got fed up, turned it off, and put 'Would I lie to you' on TV, for a laugh, and half an hour of normality to re-boot our brains!

Those who enjoy complicated, ever changing storylines, set in past, present, and future dimensions will LOVE this film..

Watchable when confined with a Heavy Cold - Fantastic Beasts: The Crimes of Grindelwald review by KW

I watched this film with a heavy cold and the computer graphics were the star of the show, perhaps too much so or were they covering up the weakness of the screen play.  Acting wise the small scenes with Jude Law as a 40'ish  Dumbledore worked well, but I felt the rest of the cast were at time just going through the motions.

Gave up on this film half way through - I would not recommend. Couldn't understand what was going on!

Much better than expected - Fantastic Beasts: The Crimes of Grindelwald review by DS

We (my wife and I) enjoyed this more than we expected, that expectation largely on the back of numerous negative comments. Special effects have moved on hugely since even the most recent of the Potter movies, and we are also no longer weighed down by the duff acting from some of the kids which blighted the earlier Potters; this is genuinely spectacular and entertaining, my only real criticism is that bits of it feel a bit padded out in places and could have benefited from some tighter editing with the loss of maybe half an hour of run time.

I believe many of the negative comments including some here are driven by the same shrieking ‘how dare they go in a direction I don’t agree with’ hysteria from the ‘everything needs to be exactly how I want it’ generation which has accompanied Solo, The Last Jedi and Game of Thrones along with many others. This is JK Rawlings world, these are her stories and characters, she can take them wherever she wants and do with them whatever she wishes, some people need to accept that and deal with it.

Don't bother unless you like special effects over story - Fantastic Beasts: The Crimes of Grindelwald review by CR

cashing in on the Harry Potter franchise but very weak story line. Couldn't face watching it all so back in the envelope it went.

Fantabulous an enjoyable watch if a little confusing - Fantastic Beasts: The Crimes of Grindelwald review by ZM

Really enjoyed this film. Great characters. A little confusing re Dumbledores brother so had to wiki to understand. I didn't bother to try and understand where the other characters fitted into the whole saga. Lazy, but just took them as they were.

I thought it was a good casting of actors. Eddie was good, but the novelty of his mannerisms had worn off after the first one. His character just looked like he had a crick in his neck ?? Brothers actually looked like brothers, and Jude Law.. whilst it seemed a bit odd at first and he wasn't in it loads, his understated acting of this well know character was brilliance. He didn't try too hard to make it marry with older Dumbledore and that was a good thing.

I ENJOYED IT ANYWAY!! - Fantastic Beasts: The Crimes of Grindelwald review by BG

LOVED THIS FILM, EVEN THOUGH GRINDELWALD IS VERY MUCH AN ALBINO JACK SPARROW! LESS BEASTS THAN THE FIRST FILM BUT SPECIAL EFFECTS GOOD. HOPEFULLY ANOTHER SEQUEL ON THE WAY

J.K. Rowling has made a big mistake with The Crimes of Grindelwald; she has focused too heavily on the lore and rewritten her own continuity. I could already hear the fans up in arms as she spins such tales as Dumbledore’s sordid lineage and the reworking of Nagini as half-human/half-snake rather than just being Voldemort’s pet. She has become the new George Lucas, where fans with froth for her own franchise to be ripped from her hands.

Whatever. Not as heavily engrossed in the Wizarding World lore to become hung up on how little of Fantastic Beasts syncs up with the Harry Potter timeline, I can overlook her retooling so long as I can get into the story and characters. The first film, Fantastic Beasts and Where to Find Them, I dug for setting up a new world outside of Hogwarts; the American Ministry of Magic was a fascinating sight with its many systems of mail delivery and imprisonment. Now the story shifts to Paris, France and there’s very little that’s new to showcase. Aside from a circus that packs up quickly, the wonder seems lost in this franchise that is settling too much for its messy politics and character arcs to carry the appeal.

It’s unfortunate that the heroes and villains are going through the same motions yet again. Magical zoologist Newt (Eddie Redmayne) is still too shy to either work for the British Ministry of Magic, choose a side in the war of maintaining wizard peace, and confess his love for the magical officer Tina (Katherine Waterston). He’d much rather tottle around France trying to find the right words for Tina than combat the more immediate threat of the evil wizard Grindelwald (Johnny Depp) riling up the wizard masses to go to war with the muggles. And so we have another balance of the dark (Grindelwald) and the whimsical (Newt).

The problem is that both arcs never become that engaging as they’re continuously crowded with extra padding. Similar to Newt, Grindelwald is too shy to recruit the cursed threat of Credence (Ezra Miller) directly. He’d rather convince the young boy to come to him through a series of overly complicated manipulations in history, staging of assassinations, and hiring of assassins. And through this messy plot, too many characters are thrown into the mix. Casting Jude Law as a young Dumbledore is a great idea but he’s unfortunately pushed to the side as little more than a footnote for this film. The wizard Leta Lestrange (Zoë Kravitz) has a sordid history involving Credence but following her struggle and pathos, coupled with a ridiculous murder-mystery twist, ultimately leads nowhere. And there are probably at least a dozen other characters weaved into this story as well that only further complicate the script.

Why is Rowling trying to write the Harry Potter equal of Syriana? This should be an adventurous fantasy but even the return of the plucky muggle Jacob (Dan Fogler) feels tacked on. And how much fun can you have with a film that involves zapped toddlers, drowning babies, and Grindelwald literally showcasing the future of the Holocaust? Even the darkest days of Hogwarts seem quaint compared to this sloppy story that seems to believe overcomplicating the plot somehow makes it more adult. I should’ve suspected as much when the previous film relied on Giggle Juice for laughs.

Pardon the cliche but the Wizarding World has lost its magic. Whereas the previous films always felt as though they had real character and goals to drive past all the muck of sifting through wizard terms and lore, Crimes of Grindelwald offers no comfort. You’re either stooped enough in the Potterness for the long haul or you’re going to get left in the dust. And since I never so much as picked up a Harry Potter guide or read through a fistful of online babblings, it’s mighty dusty back here.