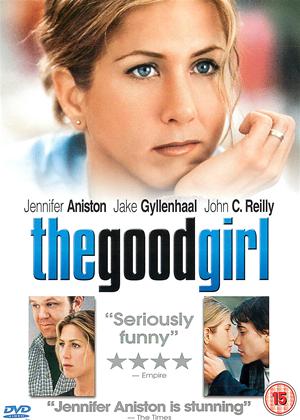 Reviews (2) of The Good Girl

Miguel Arteta's movies are always a delight; quirky, original, entertaining, never predictable, a joy to watch. I can't wait for his latest, 'Beatriz at Dinner' starring Salma Hayek (as of Sept 2017, not yet released in the UK! Very frustrating). His movies remind me of the work of Lisa Cholodenko, Sarah Polley and Rebecca Miller: sophisticated, humorous but never cynical, quirky without becoming annoyingly whimsical, in short intelligent film-making for discerning audiences who don't appreciate being treated like morons, while still wishing to be delighted, stimulated and entertained.

This movie ticks all those boxes as well as giving us one of Jennifer Aniston's best performances; an often - very unfairly - underestimated actress, here Aniston tempers her comic genius in a nuanced performance that doesn't shy from showing the ugliness of feeling trapped in a loveless, listless marriage. Jake Gyllenhaal as her young lover is superb, no wonder he rose to the ranks of Hollywood royalty soon after this film. Definitely recommended.

The Good Girl is a typical example of the latest trend of major Hollywood studios trying to do ‘low-key indie’ genre cinema… and failing miserably. Whether it’s lack of direction, or simply lack of acting ability, the biggest problem with this movie lies with its two main stars Jennifer Aniston and Jake Gyllenhaal. Gyllenhaal as the mentally unbalanced Holden/Tom overacts his character so badly it's sometimes embarrassing to watch. Aniston on the other hand is just not up to the job. You have to give her credit for trying to something different, but she fails to bring any depth to the character of Justine, and instead you get a sense that she’s just playing a slightly depressed version of Rachel Green from Friends with a southern accent. And starring in a movie alongside good quality actors such as John C. Reilly, Tim Blake Nelson and the superb Zooey Deschanel only highlights Aniston’s one dimensional acting ability. As far as the storyline is concerned, sure, ‘The Good Girl’ doesn’t have the most exciting plot or character dialogue, but hey, most of the best indie movies never do. What makes a low-key indie movie stand out is quality acting and the viewer feeling a sense of connection with the characters on screen. ‘The Good Girl’ however, fails on both counts.