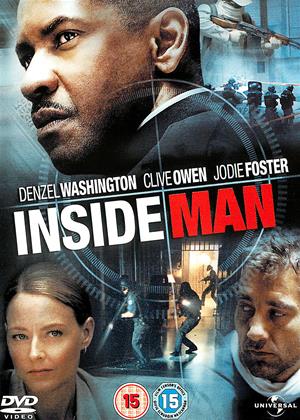 Reviews (7) of Inside Man

Inside Man. - Inside Man review by CP Customer

I thought this movie was pretty clever and entertaining overall. They built up the anticipation for the end a lot, which keeps you interested, but I was somewhat disappointed in the end, as I thought it was going to be something more extravagant the robbers were going after, but it was still a solid ending that makes you think. The robbers in the movie really executed everything perfectly. Good acting probably made this better than what it should have been, but I can't complain. A decent caper movie anyone can enjoy.

New slant to an old favourite - Inside Man review by Kurtz

"Inside Man" clearly wants to be more than a standard bank heist movie, taking time to show shadowy forces manipulating events surrounding a daring bank raid by Clive Owen and his ruthless band of robbers, and the excellent Denzel Washington's attempts to prevent a bullet-fest as the beleagured hostage negotiator.These background scenes can drag, though; they give the movie a bloated two hours plus running time and distract from the compelling clash between the two principals. It's worth a watch just to see who comes out on top, but having opened up several cans of political and social worms, director Spike Lee seems unable to wrap things up satisfactorily.

Quite Good! - Inside Man review by CP Customer

I thought that overall, this was a good film. Denzel was great as always which made it a better film than it probably would have been otherwise. A clever plot, but not quite as clever as it was hyped up to be! it did keep you guessing till the end, but there were parts of the plot that were important but never explained, which I found frustrating! but apart from that, the film moved quickly and kept me interested all the way through.

Clever story, thought out a bit too clever - Inside Man review by CP Customer

Once again a great performance from Denzel Washington as a New York Detective. He is up against the perfect bank robbery. However, once the movie is over and you think it through, the plan is not so perfect after all - in real life the bank robber would have easily been caught. I'll leave it up to you to come up with various possibilities. And the connection between the bank robber and the bank owner, alltough crucial to the motivation of the robbery, is never revealed. I'll give it 4 stars anyway because of the funny and witty Denzel Washington and some good action scenes.

I enjoyed this, but frankly I'm not sure why. The story is silly – Clive Owen + friends commit the 'perfect' bank robbery. Denzel Washington is the detective trying to stop them. Other roles from Christopher Plummer (well acted), Jodie Foster (big name, silly role), Willem Dafoe (wasted). And a big name director (Spike Lee) as well.

All that talent – wasted. The plot is full of holes, Denzel Washington overacts so much he almost turns into Will Smith. The twist at the end seemed obvious to me. Luckily Clive Owen has his face covered most of the time, so the fact that he is a wooden actor doesn't show. But there were some lines that made me smile, and apart from a slow bit in the middle there was plenty of action. Like I said, I enjoyed it but don't really know why. I'll give it 3/5 stars – it's watchable.

Interesting but an anti-climax - Inside Man review by AB

(Beware - some spoilers below) As others have stated, a very interesting film but the ending was a complete washout and the characterisation of Jodie Foster was simply a side issue that was not really relevant to the film overall - her character did nothing, influenced nothing, achieved nothing. Some holes in the plot (didn't they do a head count?) and why the hole/non-hole in the store room? I assume I know who the shot hostage was, and that was very clever as well.