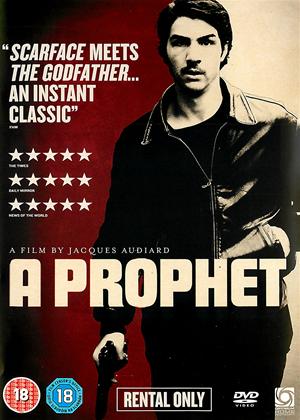 Synopsis:
A nineteen-year-old troublemaker starts a six year sentence in a notorious prison, a concrete hell where violence is the only language understood. Taken under the wing of a powerful mafia boss, he is initiated into a vicious and brutal way of life. As the years pass, he proves his worth, moving up the ranks within the prison. However, he has his own plans, and they don't involve taking orders from anyone. Using his ruthless cunning to extend his influence beyond the walls of the jail, he arranges drugs runs, hostage exchanges and violent assassinations. Once merely a petty criminal, he is soon on his way to establishing a criminal empire of his own.
Actors:
Tahar Rahim, Niels Arestrup, Adel Bencherif, Reda Kateb, Hichem Yacoubi, Jean-Philippe Ricci, Gilles Cohen, Pierre Leccia, Antoine Basler, Foued Nassah, Jean-Emmanuel Pagni, Frédéric Graziani, Leïla Bekhti, Rabah Loucif, Slimane Dazi, Serge Onteniente, Hervé Temime, Taha Lemaizi, Mohamed Makhtoumi, Karim Leklou
Directors:
Jacques Audiard
Writers:
Thomas Bidegain, Jacques Audiard
Aka:
Un prophète
Studio:
Optimum
Genres:
Drama, Thrillers
Countries:
France, Top 100 Films, Drama, Thrillers
Awards:

Reviews (5) of A Prophet

A Must-See - A Prophet review by CP Customer

This is a fascinating portrait both of a young man's personal development over his prison term and the shifts in power within the prison during the time he serves there. Don't be put off by the violence or the running time, we were transfixed -- not a single moment is wasted and every strand of plot has a significance. Any linguists will appreciate the Corsican dialect and the prison "argot" (slang). Highly recommended!

Gripping - A Prophet review by SG

I wasn't expecting much from this film especially when the English subtitles started however the film is truly gripping from beginning to end. The film description is accurate but does not convey the sense of menace and fear that permeates through the film.

Moving and complex film - A Prophet review by RP

I selected this film because in won a BAFTA in 2010 for best foreign language film + the 2009 Cannes Grand Prix. It also currently has a score of 8.0 on IMDB, so it must be good, eh?

It tells the story of Malik, a 19 year old semi-literate, French/Arab youth (France's immigrant problem is from their ex-colonies in N. Africa) imprisoned alongside older, harder men in a brutal prison, where the 'big boss' is a Corsican gangster. Hanging onto his coat-tails and going against his fellow Muslims, Malik rises through the ranks to make it big as a drug dealer, running his small empire from within prison, and as he waits for parole he uses brief spells of leave to tidy up business on the outside.

Gritty, brutal, uncomfortable and sometimes difficult to watch, it is very well acted and the length of the film allows plenty of time for character development unlike most other prison dramas. It's a moving and complex film, following the growth of Malik as he uses his (prison educated) brain to manipulate others.

I'm a bit non-plussed at how to rate this. Yes, it's good. But is it that good? I'll leave that up to you. Watch it and see what you think.

Great film for those who enjoy the gritty reality of true crime. Malik El Djebena (Tahar Rahim)puts in an incredible performance as a adolescent on his first visit to prison who gets a baptism of fire and decides to take 'protection' (not that he gets much choice) with terrible consequences.

The Making of a Criminal. - A Prophet review by Steve Mason

One of the great prison film. A nineteen year old Corsican Arab learns to survive and then thrive in this barbarous, destitute institution. While the film comments on the penal environment and the experience of French Moslems, it's Tahar Rahim's outstanding performance that most powerfully endures.