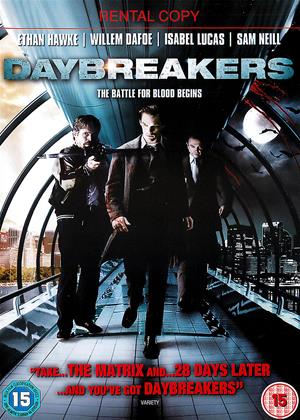 A clever twist on the vampire genre. - Daybreakers review by CP Customer

Daybreakers takes the usual premise of vampire's as a outcast group and turns it on its head. In this film vampires have assumed the role of the worlds major civilisation. After a virus spreads over the globe most of the population is now vampire leaving humans as an endangered species. Now with a world shortage of blood vampires are becoming ill and regressing into an aggressive bat like creature called 'subsiders'. And the pressure is on for a vampire scientist called Edward Dalton, an employee of the Bromley Marks corporation, who is working to form a stable synthetic blood substitute. The Bromley Marks corporation harvests blood from humans on an industrial scale, and when Dalton discovers Bromley's plan that synthetic blood will used as a new product line rather than freedom for the human race he begins to question his own morals. This is a great movie and a clever twist on the vampire genre. The film shows a future in which vampires have essentially taken over the role of the human race, they work, socialise and play all under the cover of darkness. The only thing that lets the Daybreakers down is a lack of scares, it's more a gory thriller than an outright horror movie. Overall, it a good movie with a well thought out storyline and a must see for vampire fans.

A lot better than I thought - Daybreakers review by CP Customer

The acting was brilliant in a story line that shouldn't be... definately worth a watched.. hoped for it to be a little longer with a few more action scenes... but hopefully the 2nd one will be a 5*

Dull, dull, dull. Imagine the worst bits of The Matrix combined with The Hunger. A future where vampires are the superior race and lord it over the humans who charge up their batteries. Also, reminded me a bit of that woeful drivel Equilibrium with Christian Bale

Ethan Hawke and Willem Dafoe are wasted in this quagmire of a film. Sam Neill struggles behind his vampire teeth and the overall relief I felt during the closing credits was the best thing about the film. Glad to be sending this one back.

Better than many of its genre - but Willem Dafoe as an ex-vampire called Elvis is just plain silly! - Daybreakers review by RP

Having just seen Willem Dafoe in the rather good film 'The Hunter', I thought I'd take a chance and watch him in 'Daybreakers'.

'Daybreakers' isn't a bad film - in fact it's better than many of the same/similar genre - but its weak point is Willem Dafoe. His character, bizarrely called Elvis, simply doesn't fit well with the rest of the film, although he does have some of the best lines.

The world is running out of food. Nothing new in that you might think, but here the population is largely vampires and their 'food' is human blood. Central character (Ethan Hawke) is a vampire doctor researching a synthetic blood substitute when along comes attractive human woman (Claudia Karvan) and Willem Dafoe, who plays an ex-vampire who has been 'cured'. Ethan Hawke takes the cure and gets his revenge on his former boss, played by Sam Neil.

With big name actors like Neil, Hawke and Dafoe and lots of creature effects, you might think this was a big budget Hollywood movie. But no, it's a subsidised Australian film - but quite well done.

It's nice to see vampires being scary again with plenty of blood and gore rather than the recent romantic twaddle. Some of the effects are pretty good, but once Willem Dafoe's character gets into the story the film goes rapidly downhill. Big bad boss defeated (of course), bad brother sacrifices himself for his good brother (of course), lots of blood splatter in last bloodletting sequence (of course) and finally (of course) the three goodies bask in the sunshine and ride off into a new dawn - just so, so predictable.

I quite enjoyed it (does one 'enjoy' a blood spattered vampire film?) so I'll rate it 3/5 stars. See it if you like the genre.