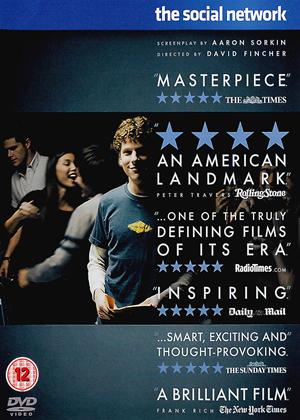 Reviews (7) of The Social Network

Like Marmite, you'll love it or hate it... - The Social Network review by CP Customer

This really is a marmite movie in that it's as much a documentary about the rise of Facebook as it is an entertaining film; if you have an interest in the subject matter, you'll find this movie thoroughly enjoyable and an easy watch, but you'll hate it if not. The film really does highlight the lengths people will go to for money and the cut-throat nature of self-made billionaires.

What a great film. From knowing nothing about the film and generally despising facebook I finished watch this story with a respect for Mark Zuckerberg (facebbok creator) for his ingenuity and skill in the creation and his hard nosed theft (if you will) of the idea. The story line is interesting, funny in parts and because it's real life not a hollywood creation there is no guarentee that it will all turn out right in the end. I checked out the characters online after the film and was surprised how well cast they were to look similar to the real lifers. JT can act quite well also.

Self-congratulatory and superficial - The Social Network review by CP Customer

The blurb advertising this film is I think one of the most misleading I've ever read. It's not only that the film is superficial, it's just so dull. The plot is so thin. The events lack analysis. The characters are cardboard cut outs who talk very quickly presumably in a desperate attempt to persuade us they're so bright. I think this film has been cobbled together PDQ to cash in on the popularity of Facebook. It's a genuine mystery to me how it won an Oscar.

The first thing that strikes anyone about this movie is all the hype - we have all heard of it and most have Facebook accounts.

Then, when the film starts, the main thing that strikes anyone with a 'normal' TV set-yp is the terrible sound quality - which has clearly been sdesigned for a surround sound system in the cinema. In fact, unless you have a sooperdooper set-up at home, I'd advise turning on the English subtitles! This movie is written by the West Wing creator, so everyone speak quickly, naturalistically, and over each other - so it is so hard to understand what they say! YOu have been warned.

In general this film is passable. A great lead role from Jesse Eisenburg, utterly believable as the selfish spoilt geek.

Some stereotypical scenes of upper-classness in Henley on Thames (filmed at Eton'sa boating lakes) are completely unnecessary - but clearly the Americans think we all live lives like Prince William in the UK and go rowing every Sunday...

So all in all, this is OK - but masssively overrated. In fact, I'd summarise the movie like this: 'The Social Network is a movie that uncool people think is really cool' - people like the fifty something Kevin Spacey who produced it. It's not worthy of any Oscar, that's for sure.

Not the greatest... - The Social Network review by CP Customer

To think this was up there against the kings speech in award ceremonies earlier this year.... mmm why? Far worse than expected... wanted to turn it off but wasn't allowed, definitely not a great film but not the worst I have seen before.

Not that much of an amazing story! Unless you are a nerd and think that facebook is the greatest invention of all time. Plus the main characters are very irratating.

Too fast paced. - The Social Network review by CP Customer

Too fast paced therefore making the storyline very confusing. Not one for a quiet night at home relaxing. Wouldn't recommend.

This movie is based on the real life incidents of Facebook founder Mark Zuckerberg.

The story is narrated in a parallel form with events that depict the proceedings of the lawsuit depositions faced by Zuckerberg. Another parallel story tells us the events that led to the creation of the social networking site ‘Facebook’.

This movie is another best work from David Fincher who gave some notable hits like Se7en, Fight Club, and The Curious Case of Benjamin Button etc. The framing device is used cleverly to narrate the different events happening in different time period. The relationship between Zuckerberg and his friend Eduardo Saverin is portrayed clearly as if it was in their real life.

What makes the movie more attractive is that it focuses on the relationship between the lead characters rather than revolving only around the creation of Facebook.

The performance of the lead actors, who are relatively newcomers, is truly amazing. Jesse Eisenberg as Mark Zuckerberg has done a great job. His performance of Zuckerberg as a cool, determined, and calculated genius is brilliant. Andrew Garfield, who plays Saverin in the movie, has also done a great job. Both lead actors have done a wonderful job in some complicate scenes like the one where Saverin is betrayed. The real surprise package is Justin Timberlake, whose portrayal of Sean Parker is very much amusing.

The movie is interesting not only because of the great script but also due to the perfect direction. The dialogues are written perfectly to match the length and speed of the film. The portrayal of friendship, betrayal, jealousy, and business issues make this movie interesting to watch.