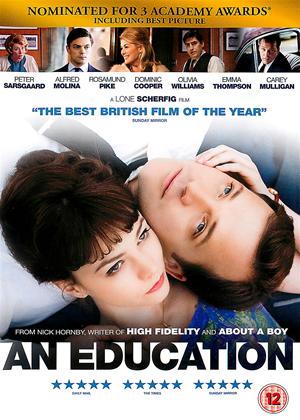 Reviews (6) of An Education

I enjoyed this slight but very well made, well told, well observed film.

It tells the tale of 16-going-on-17 year old schoolgirl Jenny (superbly played by Carey Mulligan), busy studying for her 'A' levels before going (her father hopes) to Oxford, who meets an older man. He seduces both her and her parents, who trust him all too readily. Jenny drops out of school, but is (of course) let down by her new-found love, who while outwardly charming turns out to be (of course) an unpleasant character and (of course) a love-rat. By now older and wiser, Jenny re-takes her exams, enters Oxford, and lives to tell the tale.

The period backgrounds (suburban life, London on the cusp of the swinging 60s, Rachmanism, racial prejudice) are well observed, the script by Nick Hornby is excellent, and the acting suitably knowing. 5/5 stars. Highly recommended.

Enchanting...loved this - An Education review by CP Customer

Really great film. Loved all the actors in this and thought they depicted the 60s (or what I imagine it to be like) very well. Really exciting and romantic and also very Sad.

A great mix of drama, romance, comedy and nostalgia. More for the girls this one. Quite a few famous faces and Brilliantly British!

Worth watching if its raining - An Education review by CP Customer

Overall not bad, the father character was quite entertaining and held my interest when it might otherwise have waned. The dim witted trophy girlfriend of one of the supporting characters was quite amusing too. However I felt unsatisfied at the end, the film had no real impact. In fact only a day later I am struggling to remember any impactful moments that have lasted in my memory.

Don't get me wrong, I did enjoy it, but it wasn't overly good, or overly bad. Just OK.

good actors & plot, the title is right for the film as it is the parents who need to be taught an education more than the girl as the were took in by the man more so as they should have known he was too good to be true.

A charming and moving little film, telling a simple but interesting story - An Education review by Philip in Paradiso

In 1961 London, Jenny Mellor is a bright 16-year-old schoolgirl. Her life changes when she meets David Goldman, an older man who takes a shine to her.

This is very much a coming-of-age sentimental drama but it is exquisitely well-made. The plot is simple enough but convincing and captivating. The acting is excellent throughout. Rosamund Pike, as the blonde bimbo, for instance, gives an outstanding performance, thus showing how good an actress she is.

This is a charming and insightful movie: I enjoyed watching it and strongly recommend it. And the re-creation of the atmosphere of 1960s London is excellent.