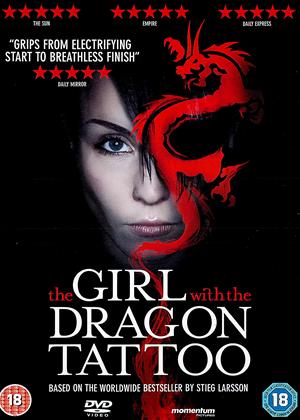 Rent other films like The Girl with the Dragon Tattoo

Reviews (11) of The Girl with the Dragon Tattoo

I'd heard a lot about this movie, the book trilogy (which I had brought for my girlfriend) and was intrigued to finally see the movie.

Not usually one to watch movies in anything other than English, I quickly switched to the native Swedish and read the subtitles as the dubbing was too unnatural. And I was glad I did. My girlfriend and I were on the edge of our seats for most of the film, although at sometimes a little confronting (this is not a movie for the kids) it was a refreshing change from the normal formula of more-of-the-same that you get from Hollywood.

The plot keeps you guessing until right close to the very end, which in itself whilst not hugely unpredictable, was still satisfying.

I've not read the book, and probably won't now as I know the ending and the suspense is lost, however I'm eyeing the next two books in the series sitting on my book case. Hopefully the sequel movie arrives soon, else I may have to read them first!

This is a strange film given the fact that it isn't really an original story, but a mash of other films and books that have gone before. The imagery for the publicity pictures is very 'Hannibal Lector' in style and much of the film has that kind of feel to it. Man and woman (of the film title) accidentally get together to investigate a missing persons case and stumble upon a serial killer or is it killers! Dragon Tattoo Girl has a very strong Lesbian appeal up to a point, but then they go and ruin it by giving her straight appeal as well (I shan't tell you why, you'll have to watch the movie), almost as though they wanted to give it underground appeal but mainstream appeal at the same time and it really doesn't work. Few of the characters in the film have anything in common and as a result of this and the patchwork of stories in-between trying to explain each characters background, the film jars and staggers along instead of gelling together and sliding along smoothly. There are so many different elements and themes, that it becomes unnecessarily jumbled, but not in an interesting way. Some of the Editing is badly done which doesn't help the fluidity of events.

I love a good thriller and don't like films that spell it out for me, I like to use my brain. Sadly this film feels as though they do have to spell it out, however I get the feel this is more for an American audience appeal. So this is European arthouse goes USA and if they had stuck to giving us a really good European thriller instead of worrying too much about the American market, we might have had a good film on our hands. Whilst there are some really gruelling moments and the rape scene twisted around is particularly gruesome and very well done, I would say that is one of the few original and well done moments in the film. They even throw in a Nazi twist for good measure, which really has no relevance to the plot at all.

Be aware that this is a Swedish film, with all the actors speaking in Swedish. However you do have the option to watch it in English Spoken language and with English subtitles. As I have a hearing loss I watched it in English Spoken language with the English SDH Subtitles. However to my annoyance the because the actors are speaking Swedish, if you are lipreading, which I was, the lips are totally out of synch with the spoken English and the Subtitles are really nothing like what is being said in English. I got the impression that the subtitles were possibly a direct translation from Swedish rather than what was actually being said in English. So it was like watching a film with three different languages being spoken at the same time. So if you have a hearing loss, be aware of this!

An interesting film to watch, but I hope the sequel is much better.

Like I suspect many others, I had heard great things about this film. Well, they turned out to be right – I found it gripping.

The film is quite slow moving and wordy – but the slow pace is interspersed with moments of intense and disturbing action. There is plenty of sexual violence – not a film to watch with your mother. But the episodes of on-screen violence are not out of place – the story itself tells a tale of violence.

There are two interwoven stories. One is the story of a deeply disturbed young woman (Lisbeth Salander = 'The Girl With The Dragon Tattoo', played by Noomi Rapace) who has a past history of detention in a mental hospital for reasons which are only hinted at. This character is violently raped by her court-appointed 'guardian', against whom she takes violent revenge. The second story is that of the investigation of a series of murders within a wealthy and secretive family with Nazi connections. The head of the family hires investigative journalist Mikael Blomkvist (played by Michael Nyqvist) to solve a family disappearance. The lives of the two main characters become intertwined, and together they uncover the serial killings and eventually uncover the killer and solve the riddle of the disappearance.

This is a disturbing and yet enjoyable film. It is not an easy film to watch and requires concentration to follow – but it deserves the praise that has been heaped on it. Highly recommended – now I must watch the two further films in the trilogy, and read the books :)

I haven't read the book, but I might just do so now. I enjoyed this film - even though I had to read subtitles and I normally find this annoying. Definitely worth watching...

A BEGINNING A MIDDLE AND AN END, NO FANCY STUFF, GOOD LOW BUDGETFILMMAKING.EVEN AFTER THE CAT IS OUT THE BAG YOU GET 20MINS OR SO OF TIDYING UP ALL THE LOOSE ENDS.

This must be the best film I have had from Paradiso for a while.

My interest was maintained for almost the whole time( which is rare ) by clever shot angles and a fast paced script, with help from the the cast the action never stopped (for long) The plot is convoluted but not Chandleresque.

I have a criticism,I dont see that the tattoo adds,in fact it detracts.

I am still thinking a week after!

Unique - The Girl with the Dragon Tattoo review by CP Customer

This is a film that will keep you on the end of your seat and has a twist at the end. Worth a watch but not for kids due to sexual content.

I am always slightly worried that books will suffer on translation to the screen. But this film, despite having to cut certain minor storylines, is completely true to the spirit of Stieg Larsson's novel. Noomi Rapace is mesmerising as Salander and Michael Nyqvist is completely believable as the journalist who is drawn into solving a decades old family mystery at the behest of its ageing patriarch. I had wanted to watch the recent remake with Daniel Craig et al but ordered the original Swedish film by mistake:I am so glad I did - this is a wonderful film.

superb - The Girl with the Dragon Tattoo review by CP Customer

This film is superb, the acting is good, it depicts what life is all about and how it is parallel to true life. The director got so much from his cast.

Our first film from Cinema Paradiso so anxious to see what we'd got. The film is good and has a brilliant story. We watched it in English (thank goodness as I hate subtitles) there's a good mix of suspense, mystery and action, there were a couple of strong scenes that left me wondering how necessary they were to the end product but we enjoyed the film.

My only negative comment would be that it was slow moving and being used to fast action drama this was slightly irritating.

Definitely a good watch though

This film is a little slow and it has some suspense in it but it's more about relationships with a huge amount of nastiness thrown in for good measure.

I am not sure I like things quite so graphically portrayed and there are some unpleasant scenes which leave a nasty taste in the mouth for quite some time following, at least for me.

However that being said it is a good movie, very watchable and the main character is one you can sympathise with and identify with up to a point.

It's well thought out and keeps you wondering until the climactic ending.

Is justice finally done? That you have to see for yourself. The ending is good I think and keeps you wondering.

The Girl with the Dragon Tattoo, a Swedish film, is adoption of the crime novel written by Stieg Larsson. It was directed by Niels Arge Oplev. Investigative journalist Mikael Blomkvist (Michael Nyqvist) deals with the case of a missing member from the Vanger family. During this case, he is joined by Lisbeth Salander (Noomi Rapace), a knowledgeable computer hacker. The movie follows their adventure in tracking down the missing member of the family.

This movie can be commended for its excellent cinematography as the scenic country side of Sweden is clearly captured. The direction is also equally brilliant. The scenes where the lead actors investigate the case are narrated cleverly without any lag. A good phase is maintained throughout the film as they investigate the archived evidence. The action scenes in the movie are good and appropriate. The movie portrays some violence including rape and assault. However, this contributes to developing the story line of the film. It is a good thing that the director has mixed some technological stuff for this modern day investigative movie.

The performance by the lead actors is amazing. Michael Nyqvist as Mikael Blomkvist has done a brilliant job as a clam but brave protagonist of this movie. Noomi Rapace as Lisbeth Salander has also given a brilliant performance. The lead characters are made interesting by the performance of the actors playing their part.