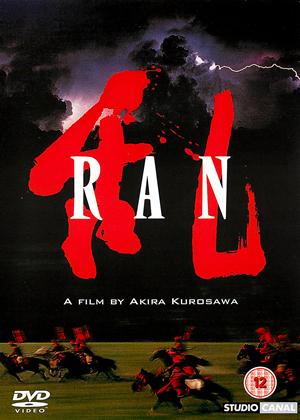 I am shocked. No-one quite managed to tell me how good this film is ... how stunningly powerful. Shakespeare would, I fancy, have loved it. It lacks, of course, so far as I can tell from sounds and sub-titles, his ingenuity and beauty of language: but this is a different medium: the poetry of words is replaced, and at least equalled, by the sharpness, the beauty and the effect that is achieved visually.

There are, however, further strengths in Ran which are possibly not matched in Lear, as well as some possible flaws to which I shall return later. While the setting is a mythical one, it did, I felt, give me a deeper insight into actual Japanese historical culture and sensibility than I had had before. It also touched moral and philosophical depths - and posed problems - which I have never quite felt that Lear reached. Lear, I have felt, takes a rather stylised set of social conventions as its basis and does not go beyond the personal consequences to examine the more political ones ...

This is surely not the greatest film I have seen, but within its context I cannot recall praising another so strongly. Kurosawa is, it seems, one of the few directors who can use both colour and a wide screen without being overwhelmed by them and he presents battle scenes, where - as so rarely - you can follow what is going on both tactically and strategically and can understand the lie of the land. On the other hand ... this is an impressively lavish production and also a rather long film, at 155 minutes: it can carry this, but I increasingly feel that directors and producers should be more restrained and hold films to tighter limits. (Unless it is Bollywood with a lot of songs and dances!) Further, Kurosawa does seem to dwell rather more than is seemly on extended violence and gore - facing reality is healthy; wallowing may be unhealthy! You need it, though, to appreciate Japanese history fully …

A classic tale of rivalry and greed. - Ran review by CP Customer

This Japanese epic based on Shakespeare's King Lear tells the tale of an aging Japanese aristocrat named Lord Hidetora who divides his land between his three sons. As predicted by the youngest son things soon go wrong and overwhelmed by greed and rivalry the sons declare war on each other and as his family self destructs Lord Hidetora descends into madness. If you've never seen an Akira Kurosawa film before then 'Ran' is a great place to start. The acting is great, the battle scenes are spectacular, and the cinematography and use of colour is simply breathtaking. If you're a fan of Shakespeare, Japanese cinema or just great films in general then 'Ran' is a must see.

I saw 'Ran' 20 years ago and remember the powerful, striking imagery throughout. It has retained its power to captivate and enthrall the viewer. The story is a retelling of King Lear although the setting has been transposed to ancient feudal Japan and instead of the aging King bestowing his land on his daughters Kurasawa decides to make sons the beneficiaries. Kurasawa cannot rival Shakespeare's ingenuity of language but there are some deeply poetic speeches in 'Ran' and it may be more impressive in the original Japanese rather than the English translation. The performances are excellent. Nakadai is both commanding and humble as the proud King but equally impressive is Mieko Harada as the scheming wife of Ichimonji (the second son). The film's first battle sequence is worth the admission ticket alone: it is one of the most grisly yet beautiful set-pieces of any film I've seen. An astonishing technical achievement, 'Ran' ranks as one of Japanese cinemas greats.

I realise that  Kurosawa is held in high regard. I also realise that Scorsese is an enthusiastic champion of the man, so I'm on very dodgy ground here, but I was underwhelmed by this film. It has been described as an epic. Well I would point viewers in the direction of Lawrence of Arabia if epic is what they want. Then compare the two. Ran is no epic.

I have what I call the 'machine gun test' which is to say if a madman were to run into the scene, any scene, and mow everybody down with a machine gun - would I care? I certainly would care if Quint, Hooper and Brody were mown down in the middle of Jaws. Likewise I would be most upset if this were to happen to Baxter and Kubelik in The Apartment. Not just because I like the characters,  I am also intrigued as to what will happen to them during the course of the film.

With Ran I had no such concerns and this is where the problems begin. When the film fails the machine gun test it starts a snowball effect in the mind. You start to analyse, maybe over analyse, other aspects and you find your mind wandering. Rather than being engaged in the moment to moment unfolding of the story and the emotional journey you are (hopefully) being taken on you just end up with a numb bum and looking at your watch.

I could bang on about the issues I had with the direction of the photography but I won't open that can of worms. I regard it as the paramount job and the first hurdle of a film to engage its audience and in this respect Ran fails and thus it is mortally wounded  from the outset.

There, I've said it.

I can hear film students loading machine guns of their own and pointing them in my direction and like my ambivalence towards the characters in Ran nobody except my own family and friends would mourn my passing.

I'm not going to rephrase what others have written, they are good reviews and their recommendations are worthy. What they don't tell you is to take an intermission around the 90 minutes mark. There's plenty more to come after that.