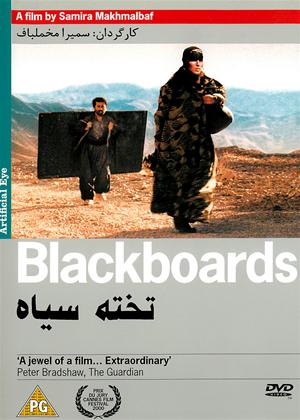 Sign up
Lemony Snicket's a Series of Unfortunate Events

Blackboards tells a chillingly realistic story of the lives of two wandering teachers who are called blackboards after their only worldly possesions which they carry with twine on their backs. It looks at the seemingly hopeless daily brutality faced by both the "blackboards" and the people they encouner from 8 year old artefact smugglers to ageing Nomad tribes people.

The film looks at how their nobal aspirations of educating people who have nothing are faced with apthy by people struggling to stay alive.

One of the most moving scene's is when a nomad asks if an elderly man with severe urine retention can use the blackboard to get carried on, in exchange for four walnuts. An offer which the starving teacher has no choice but to accept.

But what makes the film truely acceptional is the treatment of the cast, rarely can a crew portray such understanding and humanity.

A timely film which must be seen.

A compelling film, which leaves you filled with sadness for the unhappiness of the lives portrayed. It is pretty unrequited gloom, and there are many puzzling cultural non-sequiturs. Visually it is memorable.

How others live - Blackboards review by RP

You have to watch this just to see how other cultures struggle to obtain the things (education etc) we take for granted.