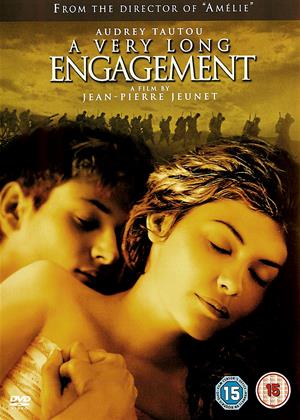 Synopsis:
From the highly acclaimed Director and star of 'Amelie', comes the truly amazing story of one woman's journey to discover the truth behind her lover's disappearance, whilst battling against the secrecy and absurdity of War. In 1919, Mathilde (Audrey Tautou) was 19 years old. Two years earlier, her fiance Manech (Gaspard Ulliel) left for the front at the Somme. Like millions of others he was "killed on the field of battle". It's written in black and white on the official notice. But Mathilde refuses to believe it. If Manech had died, she would know.
A former sergeant tells her in vain that Manech died in the no man's land of a trench named Bingo Crepescule, in the company of four other men condemned to die for self-inflicted wounds. Her path ahead is full of obstacles but Mathilde is not frightened. Anything is possible to someone who is willing to challenge fate...
Actors:
Audrey Tautou, Gaspard Ulliel, Jodie Foster, Dominique Pinon, Chantal Neuwirth, André Dussollier, Ticky Holgado, Marion Cotillard, Dominique Bettenfeld, Jean-Pierre Darroussin, Clovis Cornillac, Jean-Pierre Becker, Denis Lavant, Jérôme Kircher, Albert Dupontel
Directors:
Jean-Pierre Jeunet
Producers:
Jean-Pierre Jeunet
Writers:
Sébastien Japrisot, Jean-Pierre Jeunet, Guillaume Laurant
Others:
Bruno Delbonnel, Aline Bonetto, Art Direction: Aline Bonetto
Aka:
Un Long Dimanche De Fiancailles
Studio:
Warner
Genres:
Drama, Romance
Countries:
France, Top 100 Films, Drama, Romance

Reviews (14) of A Very Long Engagement

This is a unique film. Whilst it retains the quirky commedy and romance of Amelie, it takes it to a far darker and more mature level, with brilliant direction and cinematography. It successfully combines a wide range film categories - romance, history, war, detective and mystery - it's imposible to pin it down to any single type. Audrey Tautou delivers an amazing performance as a determined girl who refuses to believe that her fiancee died in the war, and will stop at nothing to discover the truth. Shots alternate between harrowing and detailed depiction of life and death in the trenches, with stunningly beautiful scenes, centred on the atlantic coast. The story develops over an extended period, and involves multiple strands, so that getting a full understanding of exactly what's happening benefits from more than a single viewing (unless you are very fast on the uptake).

This was very disappointing for me. It took a very long time to say very little and seemed to be trying very hard to manipulate the emotions rather than being truly moving; a gimmicky and ultimately shallow treatment of serious subject matter, especially as I understand this is the first French film to tackle it.

Jeunet uses a large number of short detailed scenes to tell a long and complicated stroy in a palatable way. This is not a film to watch when you are half-asleep, or tipsy, but for the alert viewer provides a very entertaining yarn, with many amusing diversions throughout.

Essentially it is a detective story, as Tautou (known now to the world as Amelie) tries various leads and calls upon fate to try and discover her lost love, who was one of five men condemned for illicit attempts to be discharged from the front line of the Somme.

The film is very picturesque throughout, and shows a maturity of Jeunet's distinctive style. Extremely ambitious in scope, and achieves a great deal of what it sets out to do. I would prefer to rate this 3.5, but will rate it a generous 4, as it deserves better than 3.

I don't know what it is about good French films but this had the same feeling as Jean De Florette and Amelie. Audrey Tautou was the reason I requested this film and she is superb. As an added and entirely unexpected surprise for me was an appearance from Jodie Foster. For me the two best actresses in modern cinema.

Set against this was trench warfare which was poignantly pointless and dehumanising and seen from a very personal perspective. The plot was a bit convoluted with several lines of investigation and the male actors were not quite as fantastically gifted as their female colleagues but I would generally recommend this film.

This showed the harrowing and perhaps honest face of the 1914-18 war. It manged to balance the serious and horrifying images of the trenches with a light magical touch and a page turning plot. All achieved with exceptional cinamatography and production values... watch it!

Audrey Tautou and Marion Cotillard are excellent in this film with a surprise appearance by Jodie Foster.

Never mind that it is subtitled this a superbly crafted and moving film.

Any description of the story would spoil your enjoyment of watching the film, but suffice to say that it based around the horrors of the first World war and lost loved ones.

The title gives a hint to the final outcome.

As ever the French make excellent films and always manage to find a slightly different angle to view any situation.

If you do not usually watch subtitled films, put your prejudice aside for once and watch this film.

Tried hard, didn't quite succeed - A Very Long Engagement review by BE

A harrowing depiction of first world war battlefields, a quest to find a feared dead fiancé and some incongrous scenes of a whimsical nature, failed to make this movie gel. It would have been better if the main theme had been stuck to instead of additional storylines being attached to some of the characters.

I enjoyed this film. It's almost a tale of love conquers all, and people get what they deserve in the end. Quirky, sometimes hard to view, interspersed with scenes of great beauty, visually lovely to watch. A little confusing in places because you have to read subtitles, some humour and a lot of charm. Well worth watching.

A truly remarkable and quite beautiful film that is a very touching period romance with an enthralling mystery story for its main plot and with some very gritty and realistic war scenes thrown in for good measure. Set mainly in 1920 and young country girl Mathilde (Audrey Tautou) refuses to accept her fiancé, Manech (Gaspard Ulliel) was killed in 1917 on the western front. She begins an investigation to find out what happened to him even though he is officially listed as one of the dead. She discovers he was one of five men condemned for self inflicted wounds and cast out into no mans land where they were all apparently killed. She finds that the stories of the other four are all wrapped up in the fate of Manech. This really is a delight of a film. The balmy, almost sepia, look of the 1920s and the unbelievably realistic recreation of Paris at that time is really very impressive and this is juxtaposed with the grey, dank scenes set in the trenches in 1917, some of the closest recreations of the the First World War that cinema has produced. The characters are all wonderful and very memorable and the film boasts Jodie Foster in a cameo. Ultimately this has a very clever and intricate storyline constructed like a mystery thriller with murder, deceit and twists that are very unexpected. This is a first rate film and will appeal to everyone as it has almost something for all film tastes. If you've never seen this and are looking for something truly exceptional, look no further.

A lovely way to spend an evening. A captivating film which both my husband and I thoroughly enjoyed.