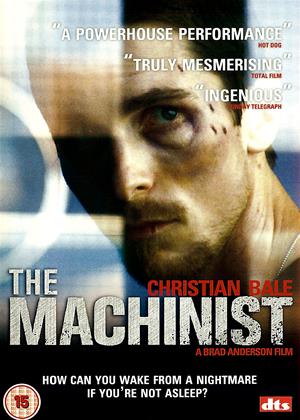 Reviews (7) of The Machinist

I was browsing the films and felt I had to write a little review on this. It was a while ago when I watched it but all I remember is that it is very slow, boring and not worth the watch.

I remember the plot being a little weird. Although Christian Bale is is a great actor, I think the film seems in a "b" category. I am a little phazed as to why he accepted the script!!

I think the end was ok as I recall but don't watch it unless you have a couple of hours you want to waste!!!

Unlike some other reviewers I really liked this film.

It's a sparse, bare, tale of a man's descent into paranoia and hallucination following a tragic road traffic accident where the central character's guilt causes chronic insomnia, and is only relieved by a final confession [no, that's not a spoiler].

The acting is excellent - Christian Bale excels himself, including losing so much weight for the part that he appears almost skeletal.

I found it gripping - but it won't be to everyone's taste. If you're looking for a crash-bang-wallop action film or a thriller, you won't find it here (although there are some tense moments). If you're looking for a romance, then you won't find it (although the central character is involved with two (?) women). What you will find is a tense, bleak, mysterious psychological drama - and the mystery is revealed by a series of clues that are repeated and emphasised throughout the movie until the truth can no longer be denied. Although the story is different, the atmosphere of the film reminded me very much of 'Jacob's Ladder'.

It was shocking to learn that Bale lost 68Ibs for this role but the result, along with his incredible performance really drew you into the film and his character. The film basically depicts a man losing his mind right in front of you and is filmed in a way that makes you feel as if you're losing yours also. Until the reasons for his delusional and deteriorating state slowly play out in front of you and him for a great finish.

not to clever - The Machinist review by CP Customer

a bit stretched out

From Christian Bale, the weight loss is actually horrifying. Unlike the recent Hunger where you actually see the physical issues with such a low BMI, here Anderson focuses on the mental aspect of the character. It is a very stylish thriller, with a strong supporting cast however when you look more closely you can see the cracks and shallow depth. The ending felt a little too clever for its own good.

what a load of rubbish - The Machinist review by KA

why christian bale risked his health to look like a skeleton in A film .i really dont know it was slow , laborous tedious . What a waste of time waiting to find out at the end what happened . do not waste your time on this one

Loved it despite its creepiness. - The Machinist review by JD

I was blown out of the water with Christian Bale's weight. He must have lost 7 stone to play this role. He is so thin it is truely creepy. He looks so sick it turned my stomach. He uses this to project a truely creepy personality. This is just awesome acting with awesome dedication. The plot is a bit odd and horrorish at times but most is great suspense and totally sapping.