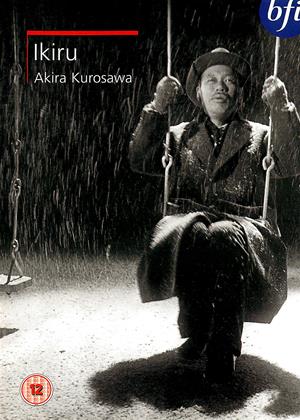 Quite possibly the best film ever made. Such a simple story beautifully told. With an excellent yet rather cynical ending. It will haunt you for years.

Moving, poignant... and maybe just a touch too long - Ikiru review by RJ

Like other Japanese films from this era that I have seen (essentially a handful of Ozu films - I need to see more to broaden my knowledge), this is a simple story told with great clarity and conviction.

I would think that if you have even a remotely introspective nature you will be able to empathise with the protagonist, Watanabe, whose imminent death from cancer suddenly brings his life into sharp focus. Whether we are living our lives in the 'right' way, what constitutes a 'good' life, and why we choose to live the lives we do all seem to me to be fairly universal questions. Maybe it only seems that way to me because I am introspective by nature - I know a great many people who give the outward impression of supreme confidence and belief in their way of doing things. My assumption is that somewhere beneath all that they are prey to the same anxieties and fears as me, but I might well be wrong.

One moment in the film I found particularly interesting, and which I haven't seen commented on in the handful of reviews I have looked at, is during a scene in which Watanabe is discussing his predicament with Toyo, his young and optimistic co-worker. After 18 months working in the office of which Watanabe is the chief, she has had enough and is resigning in order to find something that suits her better. Unlike him, she is not willing to submit to three decades of unfulfilling drudgery. He bemoans his son's lack of sympathy and understanding towards him - to which she responds, quite bluntly, that his son did not ask Watanabe to be a martyr for his sake. I suppose that Kurosawa's intention for this moment was to illustrate the selfishness of the younger generation, their lack of gratitude towards their elders - which is a valid point, but it did also make me think about to what extent we are willing to blame others for our own actions - or, in Watanabe's case, his lack of actions. Could Watanabe have made more of his life and still provided for his son? Did he use his responsibilities as a single parent as an excuse not to make bolder and braver choices?

This is a film that, without doubt, will stay with me. It is very moving and there are some truly beautiful and poignant moments. I am holding back on a 5th star in my rating purely because - after one viewing - I did feel it was maybe just a little bit long. I got a bit restless in places and just had the impression that maybe 15 minutes could have been cut to tighten it up without losing any of its emotional impact. I really need a second viewing to make my mind up, but for the time being I'm giving it four stars on the basis that I found some of the Ozu films I have seen (Early Summer being one that springs to mind) equally poignant but slightly easier to get through.

Poignant but oh so dull - Ikiru review by AB

A film that shows that living a life of drudgery is no life at all through the experiences of a terminally-ill bureaucrat is poignant in parts, helped a bit by the rigours of Japanese life, by showing that one should live some sort of life. Can only see that this is the sort of film that Guardian-reading film buffs would regard as a 'classic' but even though the sentiments are to be believed in, the film is tediously dull. However, having said that, I have given it 3 stars because it should be a wake-up call to everyone living the sort of life that relies on staying in a rut to encourage them to see life from a different perspective.

not his best - Ikiru review by tm

compared to other Kurosawa films, this is clunky, laboured and overlong. it is still worth a shout but there is a lot of repetition and certainly not as subtle as Ozu or Kurosawa's own later films. indeed Rashomon which was made earlier s a much better film, exploring more complex social challenges and the meaning of truth with wit and powerful imagery whereas this seems like the child of a bad experience with the local authority over planning permission. while we would all sympathise with impact of bureaucracy, it's just too crude a telling.

the main leads are both brilliant.