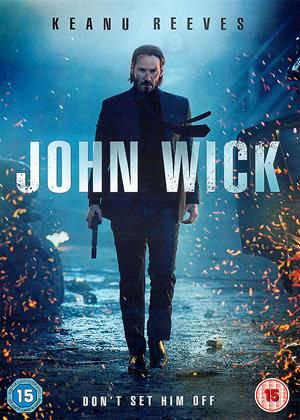 Poor hitman Keanu Reeves, lumbered with flashbacks and a dog we’re supposed to find cute. Happily the mutt’s bumped off by some Russians in order for a plot to kick in. Plot? He spends the remainder of the film bludgeoning his way through the gang. Luckily they can’t shoot straight and they come at him one at as time like in martial arts films. A percussive score tries but fails to make it exciting. Instead it’s contrived, repetitive, cartoonish and sorely lacking in imagination. Even worse, so many people liked the mind-numbing violence that they made a sequel.

What is so good or interesting about these killer revenge tantrum films? Just boring and predictable. Seen one, seen them all. Little plot just lots of violence and always set at night, which is symbolic if you ask me of sad, desperate people making a living out of killing each other!

It could be the usual boring action movie, but there is a little twist at the begin of it that made it quite atypical. I found it really entertaining. Nice story, good action scenes. I loved the main character, well played By Keanu reeves.

Didn't know what to expect from Keanu as clips I'd didn't really elude to plot or film genre. Nice characterisation and unexpectedly brilliant performance by all.

The best film Keanu since Point Break... Matrix aside obviously??

Gangsters Action Movie does what it says on the Tim! - John Wick review by CS

An interesting action movie that ploughs through the film constantly with lots of action and fight sequences and just keeps on rolling! Nothing new or different here, the same old anti-hero versus the bad guys, in this case the Russian Mafia. An average plot, average script and average acting. But it mages to keep its head above water by being simply as good evenings entertainment!

Pretty brain dead, nothing to think about... although that might be what your after but it just doesn't do much else.

Lost count of how many he killed !!!!but great action film ... Simple plot but it works ! Really enjoyed this film !!!

Vigilante meets Death Sentence meets Transporter. If you into bish bosh bash, will like this one.

Is quite well done.

Bit like Roadrunner as well. One man can take 12. Even Statham wasn't that ambitious. Quite ludicrous as they always shoot crooked, and come one at a time, two at a push.

No Country for Old Men has, in fact, way less fatalities, but is way more up-front.

The degree of Superman is quite over the top, but is quite good fun, in a guns and violence way.

Almost become the norm for half the new films now to be gun orientated. Makes you see why US loves guns. If many more Paris style attacks in the street take place, perhaps the entertainment value may wane?

Didn't like this film at all. Too much violence, over the top and a ridiculous plot. Not a good film for me at all. Only watched the first 20 mins of it and decided to turn off and return. I suspect John Wicks 2 is the same. No thank you

Can't believe this film only rates a 15 certificate. OK, it's sort of comic violence, but having said that, the "hero" is a mass murderer who just shoots everyone in range. Talk about "overkill" ! I can't believe that young kids don't get ideas ((and a rush) from seeing Wick shoot so many people, and having most of the other characters admiring him. No plot as such, just extreme revenge. A nasty film all round, especially the dog being butchered - since when was that entertainment, except to

John Wick feels like a real comeback for actor Keanu Reeves. This isn’t the movie that will make him more highly recognized for a new iconic role. It’s not the movie that will send him soaring from his previous standing into the A-list status. It probably won’t win any awards or be that highly regarded as the year’s best films. What it is, however, is the sleeper action picture in which Reeves fits like a glove. Essentially, it’s just a darn good action romp that aims to please.

Reeves plays the title character who has just lost his wife to cancer. Turned an emotional wreck, he seeks companionship with a dog who he takes out for drives in his snazzy looking car. But life throws him another brutal curve ball as his house is attacked by Russian gangsters who kill his dog and steal his ‘66 Mustang. Completely broken and mad as hell, Wick breaks open his secret armory to resume his old life of an assassin and get his revenge.

The man who wronged him is Losef, the son of the Russian crime syndicate leader Viggo. This is mighty bad news for Viggo seeing as how Wick once worked for his organization as the unstoppable killer once referred to as Baba Yaga or The Boogeyman (which ever sounds more sinister). Given their history, Viggo attempts to negotiate with Wick, but it’s too late as Viggo’s son has awakened the devil inside. So it’s game on with waves of hitmen against the one-man army.

At this point the movie is pretty much a dizzying array of gunfights and car chases. This traditionally sounds like it would be a dull experience, but each sequence packs a major punch to keep your eyes glued to the screen. John bursts into a nightclub and begins an efficient assault on the hitmen from a crowded dance floor to a cramped lobby. He makes smart and calculated moves, leaving himself just enough time to quickly reload before another round. The car chases are brilliantly staged at night with good looking cars whipping around with guns blazing. And just to keep things interesting Wick has some enemies turned allies in the form of a hit-woman played by Adrianne Palicki and a sniper played by Willem Dafoe.

This is the first film directed by Chad Stahelski who has had a long career in Hollywood with doing stunts. He clearly has an eye and a feel for good looking action scenes that flow incredibly well. The faith he places in holding the camera somewhat steady as Reeves dispatches multiple gunmen in one take is just extraordinary. He’s not afraid to stage some impressive action sequences and let the audiences see all of it. I especially enjoyed how he narrowly avoids the action movie cliches as when Wick and his opponent hide behind a series of pillars between shots. A lesser film would’ve made Wick a little faster or find some way of taking out the pillar. Instead he stealthy makes his way close enough to the enemy’s pillar and shoot the barely open and visible leg of the gunmen. I also appreciated how Wick’s revenge quest has some well-thought plans. He stops by a church which is a front for both money and evidence to blackmail politicians. Wick finds this vault and sets it all aflame without a second thought.

What’s most impressive about this movie is Reeves himself. For what would sound like a routine action picture is elevated by both his acting presence and the quality of the direction. There are some rather poignant moments where he’s given just enough room to show far more than one would think he was capable of. He reads a note from his dead wife and painfully tears up. He shouts in frustration as he smashes concrete with a sledgehammer to reach his secret stash of weapons. Reeves has finally arrived as the macho action badass that can take his spot among Charles Bronson and Liam Neeson. For the first time watching a movie starring Keanu, I was the one staring at the screen with my eyes glazed and my mouth only able to utter “whoa.” John Wick is the action sleeper hit that offers up enough surprises to be a solid bit of gritty entertainment.