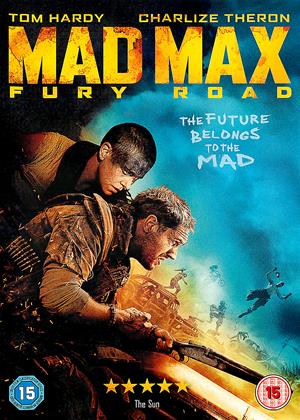 Its rubbish! - Mad Max: Fury Road review by AS

Unbelievable nonsense - terrible story + some pretty girls thrown in + some special effects and stunts = a crap film. No actor could make this work!

Why did I rent this? - Mad Max: Fury Road review by MD

The only thing I can say about this film is that it proved to me what an idiot I can be. I never particularly liked the original series of movies, but against my better judgement I thought I'd give it a try as it got pretty favourable reviews in general.

Talk about dumb. Yes, me as much as the movie. This made the originals look intelligent and thought-provoking, and I have to admit to both fast forwarding large chunks and finally giving up on it. Even by the low standards of modern action movies, this was a new bottom for me.

My first experience of Mad Max. There's little to recommend. For fans of the action chase genre (?) I guess it's a must but it's not going to rate against your The Fast and The Furious. Some of the scenes are visually quite stunning. I wonder if the budget might have been better spent on flowers or something. Plus there's a very weak ending to look out for. I didn't really think about it much. I sleepily just let it roll. Yes, on the whole I would agree it was pants.

If you loved mad max, don't watch it. Just felt like watching a bad chase movie. That dull fell asleep watching it ! If it wasn't for the wine would have turned it off after 10 mins. Shame because Tom Hardy is an excellent actor..

hat a massive disappointment. This film is great. This is amazing. That is all I heard about it when it hit the theatres but having literally just seen it - I cannot believe I was watching the same film.

On the positive - some of the chase scene are good and some of the deaths sequences are glory. The plot is relatively decent if you do not think about it too much. I would put it on par with Mad Max 3.

On the negative - the accents are all over place (Charlie Theron does not even bother to even try to sound Australian), Hardy just mumbles his lines and over-acts when he does deliver them, the CGI looked pretty awful, the electric sand storm was plain stupid, the stunts were super-human and none of this felt like a desperate apocalyptic land the second and third film built on. I agree it is nice to see practical effects and real car crashes but I cared nothing for any of the characters, so I could not care less who crashed, who died or who survived

After watching this all I want to do is show the wife Mad Max 2 and how to do a proper Mad Max film. When that was a classic this film felt totally of this time. All gusto and no character development. All speed and no destination. All action and no desperation.

The sad thing is that by the 2/3 point I was thoroughly bored. In a Mad Max film. Bored :o

Rubbish. For me it was more disappointing than Guardians Of The Galaxy because with that film I had low expectations which were not filled. This one made me feel I wasted an evening.

Jaw dropping and over the top - Mad Max: Fury Road review by GO

A wild ride brilliantly choreographed and a blast from start to finish. If you want complex plotting look elsewhere. This an epic archetype played out in the desert. Also darkly humorous if you have a black sense of humour.

Probably absorbing if you have the IQ of an 11 year old, but it should be an embarrassment for all concerned.

A blast of a motorised chase movie that exposes the Fast & Furious franchise for the macho posturing shell that it is. Forget George Miller’s first three attempts to get it right. This is a step up in class. Thank goodness it took 14 years to get to the screen as this enabled Mel Gibson to be ditched along the way. Tom Hardy is no great replacement but he has little to do anyway. The movie belongs to ice-queen action-woman Charlize Theron. The under-written Max is just along for the ride.

Almost the whole movie is one big motorised chase across the desert. Abandoning any pretence of realism, the more ridiculous and outlandish the action gets the more fun it becomes. It’s easy to dismiss as a glorified video game and it certainly won’t be to everyone’s taste, but this is proper show-don’t-tell cinema. Just sit back with Miller at the tiller and let those sweeping Namibian landscapes and glorious saturated colours wash over you. A feast not for the mind but for the senses.

Loved this film,a spectacular and violent chase there and back again.The fragile trust between Max and Furiosa is fantastic.

Absolutely rubbish. The entire movie is a group been chased into the wilderness just to realise they were better off at the place they had set off from, then been chased back again.

I believe the easiest way to describe the brilliance of Mad Max: Fury Road is in the most eye-catching addition of the desert convoy. A customized truck houses a stage of drummers in the back and a guitar player in the front with a vast array of speakers. The guitarist, bound by elastic strings for both him and his guitar, shreds a powerful battle-cry as the villainous gang plows through the desert sands. He may appear as a simple gimmick existing only for the sake of atmosphere, but his guitar doubles as a flamethrower. He has his purpose when the violent chase breaks out of men and women firing back at each other - jumping from vehicle to vehicle. This is the genius of the film in how it delivers on the mile-a-minute, high-octane excitement, but still has a surprising focus to all its madness. Plus, a man playing a guitar-flamethrower is something ridiculously awesome to behold.

The world of Mad Max is a post-apocalyptic world with a rich mythology that is wonderfully built within the first few minutes. We’re exposed to a dirty society run by the monstrous Immortan Joe (played by Mad Max villain alumni Hugh Keays-Byrne), dazzled in his plastic chest armor and breathing apparatus with painted on teeth. The large teeth look like they were painted on, but there are moments where the teeth open leading me to believe that the device may be directly attached to his jaw. He is seen as a god among his people - showering them with water and promising them safety in his gritty collective. To be granted eye contact or a mission from Joe is a step closer to Valhalla. To mess with his horded collection of wives is a death sentence. For the tough-as-nails Furiosa (Charlize Theron), she seeks to free his “property” of reproduction to a better world in a stolen tanker. Thus, the long chase begins.

But where is our title character in all this? Keeping with the tradition of the franchise, Max (Tom Hardy) is more of a force for the story than a dominant character. He’s merely thrown into the scenario where he must carefully decide who to side with and who to shoot. That being said, there’s a solid amount of backstory delivered in very little dialogue. Having become a veteran of the world bathed in fire and blood, he has grown paranoid and haunted by his past. Voices of those he couldn’t save continue to disturb his mind and affecting his actions - piercing his mental state like a reoccurring heart attack. Through these brief hauntings we learn enough about Max to be invested and interested in his role. Even more subtly aloof is the equally hardened Furiosa who appears twice as mysterious and alluring. Little of her past and the story behind her mechanical arm are divulged, making her all the more intriguing about who she is and what she desires.

Similar to the character development, the entire world is parsed out in telling visuals rather than overused “after the fall” narration. The origin of the gas and water wars are not important nor are they that interesting. What we get to learn about is the twisted society born around the reign of Immortan Joe. The man surrounds himself with his white-painted soldiers serving in hopes of being honored by their glorious leader. The simple elements of their society are brought about magnificently through the action. We learn that these are men without fear of death - welcoming their trip to Valhalla by spraying their mouths with chrome and launching head first into the enemy. Every noble sacrificed is celebrated by the army as a triumph of loyalty. We get to follow one such devoted boy by the name of Nux (Nicholas Hoult) - forsaken by his god and struggling to find his place in the world as he switches sides.

And the cars? Sweet mother of pearl, the cars! Every single vehicle has some strange and striking concept to their design. Immortan Joe drives into battle with something that appears as a cross between a monster truck and a vintage sports car. Marauding outlaws assault convoys with so many spikes on their exteriors I’m surprised there wasn't scores of road kill and corpses skewered all over their front. And, I’m sorry, but I just cannot get over the speeding truck that appears more as a concert stage. It’s not used as a quick joke and isn’t just there for decoration. Everything has a purpose in this film for as strange and out there as it appears. Even the smallest details have their place as with Joe’s traveling accountant who seems to have more fat than feet (and nipple rings in case he wasn’t weird enough).

George Miller’s new Mad Max is not a reboot, update or homage to his classic franchise; it’s the best damn Mad Max sequel you could’ve ever dreamed of and so much more. It’s a major wake up call to the action genre with enough weight and substance to the fights to be more of a filling main course than a meaningless collection of side dishes. The crashing cars, flaming explosions and people climbing/flying from vehicles is all fantastic. It’s amazing to finally see something that looks just as thrilling as when it was filmed. Leave it to the master of post-apocalyptic filmmaking to show this generation of special effects junkies how it is done. We live in an era where it’s easy enough to create anything out of computer graphics, but nothing beats a bad-ass car chase with real cars being smashed up real good.