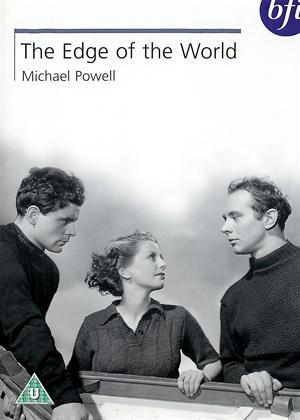 Synopsis:
Shot over four arduous months in the wild, windswept Shetland Islands, Michael Powell's first independent production establishes the daring techniques and experimentation that would later become familiar hallmarks of his career. 'The Edge of the World' tells the moving story of a remote island and its inhabitants, whose traditions and way of life are threatened by a rapidly industrialising world. To settle an argument over whether the islanders should give up their livelihood and move to the mainland, two childhood friends follow an ancient tradition and climb the island's highest cliff face. The outcome shatters the island's peace and splits the two clans apart.
Making the film proved so demanding and sensational that its 32-year-old director was moved to write a full-scale book about his obsession with the tragic grandeur of Scotland's Outer Isles and his struggle to film it, 200,000 Feet on Foula which actor Daniel Day Lewis reads from here on this video.
Actors:
Niall MacGinnis, Belle Chrystall, John Laurie, Eric Berry, Kitty Kirwan, Finlay Currie, Grant Sutherland, Campbell Robson, George Summers
Directors:
Michael Powell
Producers:
Joe Rock
Writers:
Michael Powell
Studio:
BFI Video
Genres:
British Films, Classics, Drama, Romance
Countries:
UK

Rent other films like The Edge of the World

Reviews (1) of The Edge of the World

Understated, beautiful early Powell. - The Edge of the World review by Steve Mason

The shoot for the film was arduous, being in such a remote place, and before air travel there was feasible. The cast and crew had to spend most of a year living on the island because it was so difficult to commute. This story is told in Powell's seventies documentary, Return to the Edge of the World.

It reminds me of the extremes Werner Herzog went to in his seventies and eighties films to capture something difficult and elusive. I wouldn't recommend it as the most entertaining of Powell's films. But it is very stark and beautiful, and probably unique. Certainly a must see for those interested in the brilliant Powell, and the history of the islands. Not so much for others