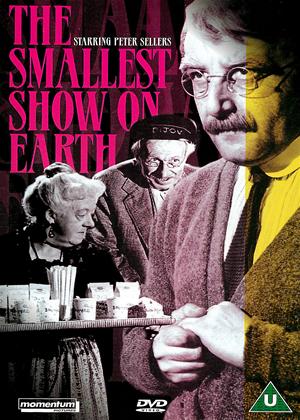 Reviews (4) of The Smallest Show on Earth

British comedy, more charming than hilarious, but enjoyable all the same. Travers and McKenna inherit and reopen a run down cinema, by no means aided by staff Sellers, Rutherford and Miles, who are all great playing elderly eccentrics. There's a lovely scene when the three watch a silent film in rapturous nostalgia.

Hilarious classic - The Smallest Show on Earth review by Harry

For the older generation, a trip down memory lane with some great stars. Bill Travers and Virginia McKenna were a fine teaming - they later co-starred in "Born Free". What a hilarious place to put a cinema! Very enjoyable.

The film feels old, like the cinema - The Smallest Show on Earth review by George

My wife and looked forward to seeing this film again. It concerns a couple who inherit a decrepit old cinema, with a decrepit old staff, We enjoyed it many years ago but no longer as we felt it had passed its sell-by date, so we pressed the eject button.

Showing Tonight - The Smallest Show on Earth review by CH

Whatever happened to Killer Riders of Wyoming? The question comes to mind while revelling in The Smallest Show on Earth (1957). One scrambles to see whether this existed, for considerable trouble must have been entailed in filming those scenes which surface upon the small screen of a rundown cinema in the town of Southborough whose air is dominated by its glue factory.

But no, this and several other Western scenes were especially made – fast horses, speeding trains, cliff-edge tumbles and all – for a delightful, moving comedy written by William Rose who was responsible for many other films of an Ealing hue; this was made by British Lion, and it should be as well known as his other work.

It opens with a postman on his rounds, who reaches up to hand Virginia McKenna a letter for her novelist husband (Bill Travers). Once he rises from his typewriter, he opens it and finds that he has come into an inheritance, something which could make all the difference to their impecunious state (desirable as their London home appears sixty-five years on).

Full pelt (first class) to Southborough, and, in time, down to earth, for the junior solicitor Leslie Phillips's sad task is to inform the young couple that the long-lost great-uncle's legacy is a cinema – the Bijou -, whose rafters and lighting are regularly shaken by the adjacent railway line. Such is the state of the place, it could do with rapid application of the liquid produced by that glue factory.

All in all, a legacy which would make a 1957's publisher's advance appear the stuff of dreams.

What's more, the Bijou comes complete with three ancient members of staff from its glory days: at the box office and piano is Margaret Rutherford while at the projector and whisky bottle is Peter Sellers (who, in his early thirties, was dressed to look close on eighty) while, equally bewhiskered, there is Miles Malleson who multi-tasks as janitor and commissionaire.

To say anymore about the plot is not necessary. It is the familiar one of modest forces in battle with a conglomerate (such as 1939's Cheer Boys Cheer did so well, its subject rival breweries). All this takes but seventy-five minutes, including those preposterous Westerns, but contains so much that one cannot help but want to sit round for the next showing to savour again the rapid dialogue, the ready humour, the pathos, the skilful plotting: here is everything to fuel a term at film school (including Virginia McKenna's hapless attempt to sell ice cream during the interval).

All of the cast, directed by Basil Dearden, must have had as much fun in making as this anybody will do if at all tempted to watch it.