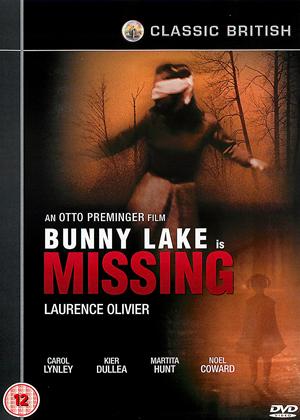 Reviews (1) of Bunny Lake Is Missing

When did Laurence Olivier encounter The Zombies? No, this is not a little-known science-fiction endeavour (curious as that would be) but a reference to a scene in Otto Preminger's Bunny Lake is Missing (1965). As a decidedly straight-backed Superintendent from Scotland Yard, he has taken young Carol Lynley to a pub for nourishment amidst the disappearance that morning of her four-year-old illegitimate daughter known as Bunny.

So far, what with Olivier invariably accompanied by a Sergeant (Clive Revill), this might appear a thriller sprung from an episode of Edgar Wallace Presents... Nobody, however, is a stock figure, even the junket-making cook at the School from which Bunny vanished. With a script by John and Penelope Mortimer (with some anonymous work by Ira Levin), this makes something well-nigh Gothic from Evelyn Piper's novel. The appearance of The Zombies on Ready, Steady Go on the pub's 23-inch television is but one of of the details that take all this out of the ordinary.

Did any pub feature a television, let alone in a film, at that time? Then again, this is a film in which Olivier suggests that it would be futile to seek out those aboard the 'bus which took Carol Lynley and Bunny to school earlier that day: “bus conductors are rarely observant - they tend to be dreamers and philosophers, a form of self defence.”

Already suspicions are aroused by Anna Massey's creepy turn as the School secretary, a School whose founder (Martita Hunt) keeps to a cluttered top-floor flat where she works, well-nigh obsessively, upon a book about children's talk. This is but one of many great performances (and how one hopes her Fifties television rôle as Lady Bracknell might yet surface).

And, yes, is there any more unsettling performance than that by a now large-eared, shuffling Noel Coward as neighbouring landlord of the flat into which Carol Lynley and her brother (Kier Dullea) have moved this same, crowded day? Dressed not in a silk dressing gown but a woolly jumper and clutching a tiny dog, Samantha (one imagines he asked to be paid more to do that), he appears at first affability and concern, even though stating “no caged birds, no livestock of any kind” (a catalogue which includes children). As the sky turns dark, he is given to suggestive moves while proclaiming, “I am told that my voice is extremely seductive. It has seemed to unleash whole hurricanes of passion in the breasts of women who watch me on the BBC.” And if that is not enough to tempt them to drop before him, he takes a whip from a wall of wooden African heads and cracks it with practised ease (even if one cannot quite credit the claim that “I sung rude old Welsh ballads”).

“Bloody pervert, if you want my opinion,” as Revill says to Olivier, who, in a nice turn, suggests he temper any prejudice during this investigation. Coward's fairly brief appearances linger in the mind, but a key one is Carol Lynley not only obeying her brother's order to bring him a cigarette in the bath but sitting in the edge of it - gaze not averted - for some while as they discuss the situation. Their shared past has not gone away, imagination and fantasy loom throughout, heightening Preminger's marvellously shot widescreen, black and white cinematography,. This works to equal effect inside and out, a masterclass in pace and rhythm, leaving no moments for doubt. Even slower scenes have a necessary tension, all of them making this a high-clamp production.

The wonder is that - as Carol Lynley says in a recent interview included as an extra on the DVD - much of this was filmed at night in order to accommodate Olivier who, earlier in the evenings, was on stage as Othello. In many strange, seemingly logical turns Carol Lynley visits that night a real, gaslit Dolls' Hospital in Soho where Finlay Currie plies his trade. As Carol Lynley also recalls, Currie had been on stage that day - indeed, for two performances - which led him to ask if, aged 84, he could play the part whi