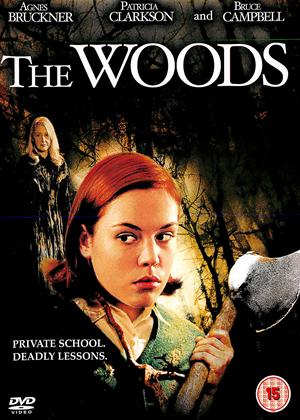 Reviews (4) of The Woods

The 'wood'en acting - The Woods review by CP Customer

Being a fan of films that contain religious or Pagen themes like 'The Wicker man' or 'The Craft',I thought 'The Woods' would be of interest to me and though I didnt have expectations that it would be as arty as 'The Wicker Man' I still had aspirations of a small scare. It was not to be.

The plot was weak and failed to tie up any confusions about what had originally happened at the school and the history of the characters and the story was fatally flawed in lots of ways. In fact the only scarey thing about this film was the wooden acting!

I couldn't make out if this film was supposed to be a comedy or not. The plot was rediculous, the tension non-existent. I turned it off after about half an hour. I wish I could give it no stars.

Above average and complex psychological horror-thriller. - The Woods review by CP Customer

If you're expecting a standard teen horror movie you're going to be hugely disappointed. The Woods is a complex character based psychological horror-thriller which is quite similar in tone to M. Night Shyamalan films like 'Signs' and 'The Village', and if you've seen McKee's previous film 'May' you'll already know the quirky mix of slow paced horror and character led drama he brings to the screen. The quality of acting as you would expect from Agnes Bruckner and Patricia Clarkson was very high and the direction from Lucky McKee was expertly paced and beautifully shot. The horror/supernatural element of the story is often difficult to follow, and the film never really explains it for you, so by the end of the film you'll either get it or be left asking questions. Though even if you're left a bit confused the film does take you on a decent ride, and if you need answers it's really not that hard to look up an explanation of the story online.

Director Lucky McKee has a pretty impressive filmography. He may not be the most prolific, but his projects are always extremely interesting. I first knew of him through 2002’s excellent ‘May’ starring the under-valued Angela Bettis as … well, that’s another story.

In ‘The Woods’ he wastes no time in smothering us all in a genuinely weird, slightly stylised atmosphere which ensures that, even when nothing much is happening, there is a pervading sense of unease. The girls’ boarding school into which our heroine Heather (Agnes Bruckner) is placed is a loosely choreographed web of spite and unnaturally baneful authority figures. So unfriendly is it, that bloody stories about the history of the surrounding woodland are simply an additional level of horror, rather than the sole focal point.

A bored-looking and sardonic, Heather would be difficult to sympathise with if her parents and fellow pupils were not so unrelentingly weird or loathsome, or both. Patricia Clarkson as head teacher Mrs Traverse is particularly good; unruffled and unflappable, commanding attention at all times. High class bully Samantha (Rachel Nichols) is, from the moment we first meet her, in urgent need of a very long detention.

Every character is steeped in a certain level of menace, often softly-spoken but sinister. Scenes fade away abruptly, but this never seems out of place – the eccentric but assured direction is almost a character in its own right. In comparison to this, the latter effects-lead scenes in which the true nature of the authority figures is revealed seems almost pedestrian. I say almost because, despite the CGI and more traditional jump-cut shots, it is still very much the idiosyncratic weirdness that endures. My score is 7 out of 10.