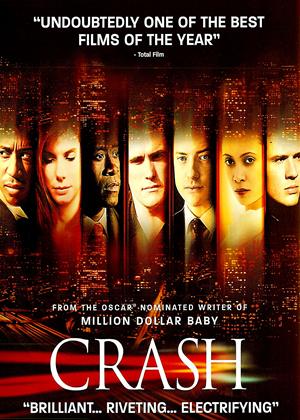 This movie was hard to watch. The seething racism amongst a broad spectrum of the citizens of LA was nearly tangible. However, I quite respected the intricate plotline and the superb performances from some of the actors had me in awe. It's a rare thing in Holywood these days to have a film that looks at something as touchy as racism from ALL angles. This movie wasn't sugar coated and it's wild twisting plot isn't as transperant as most of Holywood's offerings, in fact a few bits took me completely by surprise which is rare but definately welcomed. Whilst I won't rush out to watch this again (too painful) I would certainly hope that it receives a few Oscar awards.

Absolutely stunning. I was totally captivated throughout the entire film by the brilliant performances all round and the gritty realism of the story. Even Brendan Fraser carried off his role well! Essential viewing.

Maybe if it hadn't come lauded with praise and trophies I could have been more forgiving. However, this looks and feels like a limp-wristed remake of the seminal Grand canyon- a movie which expressed the same gulf of life experiences in people living geographically close but in wholly different worlds. Nothing in here matches the sheer horror of the scene in Grand Canyon where the mother realizes the bland insurance salesman at her door is trying to sell her a policy to cover the potential funeral expenses of her young child- on the basis that life is brief and brutal in her neighbourhood so you might as well prepare.

Characters lives cross over in to many pat and co-incidental ways, and too many fine actors get to do little but express a view point. We have characteristics, not characters.

Sandra Bullock is wasted, her epiphany almost an irrelevance. Don Cheadle's character is the most fleshed out but still suffers from an unsatisfying resolution of family issues. Brendan Fraser is amiable but comes across as a pallid retread of the complex and compromised character that Kevin Kline played in Grand Canyon.

Rent the better, earlier film- there's a terrific turn by Steve Martin who's character has become a 'not black enough' TV producer in this version.

Well rare for me, this film is the best film I have seen in 2 years.

I found it to be emotionally educating and would recommend it to anyone who likes a thought provoking film.

Given the number of characters in this gripping film, mostly played by well known skillful actors, a fault could be that the viewer simply doesn't get to know any of them that well. It feels a bit like it should be a 6 or 12 part drama which should return to the exploits of these loveable, and some quite unloveable persons each week. There's bits put in the film to deliberately tug at the heartstrings and make you question humanity... but why not. A great film, but whether it will be regarded as a classic in say 20 years time is questionable.

Intricate plot, brilliant acting; a city on the edge - Crash review by DA

Wow! This is a portrayal of racism fuelled by stress and ignorance and anger. There is a large cast of characters (and you need to watch it twice to realise all the little details) and an intricate plot. In almost every character story arc both good and bad was displayed; some of the worst characters found redemption. There were some wonderful moments and some moments when I dreaded what was coming next. Every aspect of humanity seemed to be on display. And the interweaving of the stories kept me on the edge all of the time.

Superb acting by almost every member of the cast means that this is a film well deserving its Oscar.