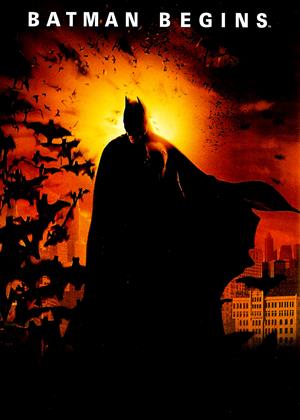 Phenomenal movie but what's with the beginning? - Batman Begins review by CP Customer

The first 20/25 minutes of this movie was dire but the rest was excellent. Did Mr Nolan think he could jump straight into the action without laying a good foundation for the story first? Liam Neeson was farcical as Ra's Al Ghul and at times Christian Bale seemed to be a little comical himself but on the whole an excellent piece of cinematography. Katie Holmes, who had been slated by many critics, gives a career-best performance (you probably haven't seen any of her other movies so you may not understand the high praise) and Morgan Freeman, Cillian Murphy, Michael Caine and Tom Wilkinson all give note-worthy cameos. Definitely worth watching - just try to ignore the boring beginning.

Really enjoyed this film. Great after all the previous "downhill quality slide" of previous Batman movies to have one that tried to capture darkness and menace. It's still an action film after all so you don't expect to have a film of many levels but there was plenty to keep our interest throughout and a slight promise of another film towards the end. A good rental.

I have to admit to not being much of a fan of the past films in the Batman franchise; but hats off to director Chris Nolan and writer David Goyer because 'Batman Begins' is not only the best Batman film out of the bunch, it's easily the best within the superhero genre made so far. The film begins by exploring the origins of Bruce Wayne and goes into great detail to explain his transformation into the Batman. Easily as famous as Batman is the Batmobile or 'Tumbler' as it's also known in this film, it really makes all previous Batmobiles look like play toys, and the Batmobile chase scene is just breathtaking to watch. As well as a great storyline, the choice of cast is what sets this film apart from others within the comic book superhero genre. Christian Bale brings a real depth and darkness to the character of Bruce Wayne/Batman; Michael Caine, Gary Oldman, Morgan Freeman, and Liam Neeson all provide superb supporting roles and Cillian Murphy is fantastic as the creepy and psychotic villain 'The Scarecrow'. Easily one of the best films this year!

Not Bad, but with a lot of film of this genre, is that it has too many quick cuts to make the action look fast.

You can see Nolan working out his formula for the Batman franchise, that would pay massive dividends with the next instalment. This is a good blockbuster but nothing more. Lavish sets, fancy toys and big bangs hide the little substance on offer. For a film with such a sizeable running time the characters lack depth or development. The initial training prologue and prison needed trimming. However Blu Ray owners will enjoy the wide range of extras and the excellent visual detail, with a booming soundtrack. Making for an ideal night's entertainment.

A sincere and poignant origin story, Batman Begins was a welcome distraction in 2005, especially after the 7/7 London bombings that occurred shortly after the film’s release: I vividly remember, after that tragedy, wanting to know why we had terrorists, but not anti-terrorists like Bale’s Batman. (15 years later, I still wish we had a law enforcer like him, to strike awe and hope in all of us by expressly rejecting lethal force and firearms.) The film also stands out visually from the rest of The Dark Knight trilogy, from the grotty, rusting, Blade Runner-inspired setting of the Narrows, to the Scarecrow fear gas effects, and of course, the swarms of flying bats. None of the imagery here may be as profoundly realistic as the brightly lit streets of The Dark Knight, but I’m still grateful we got to see Nolan’s take on a comic book Gotham.

With the ability to watch this afresh having seen the entire 'Dark Knight' trilogy this origin picture of the iconic superhero is actually a clever, intricate action adventure film with some interesting themes behind it. Director Christopher Nolan effectively shifted the superhero genre into a more darker and adult oriented movie experience by returning to the roots of the character as a rage filled avenger whose morality is constantly being questioned. The choice of Christian Bale to play The Batman has been one that has divided audiences but, with the wisdom of hindsight, he does feel exactly right for the role and made the character his own. There is no doubt this first of the trilogy tests younger viewers as Batman doesn't appear until nearly an hour into the film as the story focuses on what drives the young Bruce Wayne to become this character in the first place. It's the murder of his philanthropic billionaire parents that pushes young Bruce, filled with hatred, anger and a desire for vengeance, to leave his luxurious life and disappear. He finds himself taken under the wing of a mentor, the leader of The League of Shadows, an organisation that it claims is there to right wrongs. But disillusioned Bruce eventually leaves the umbrella of the League to create the Batman, designed to instil fear in criminals in his home city of Gotham. But he soon finds that the League have designs of Gotham and the Batman must take them on to prevent the city being destroyed. The action set pieces are fast and creative with the vehicles and gadgets given the veneer of being real so the film feels like it's grounded in the real world rather than being obviously comic book and/or science fiction. The topnotch cast are all on great form and include Liam Neeson, Michael Caine, Katie Holmes, Rutger Hauer, Gary Oldman, Cillian Murphy, Tom Wilkinson and Morgan Freeman. This is essentially the superhero film made for grown ups and it's well worth a revisit if you weren't convinced the first time. It's a very different film for example from the MCU styles films, and of course the trilogy was yet to produce the best of the bunch.