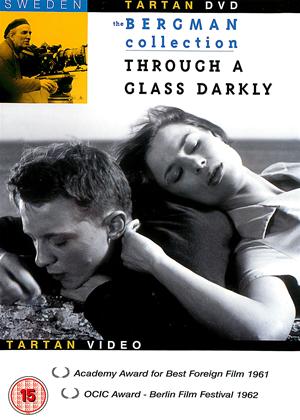 Synopsis:
A schizophrenic girl (Harriet Andersson) sinking into madness, is the focal point for the emotions of three men - her husband (Max Von Sydow) a doctor, who is helpless to cure her, her father (Gunnar Bjornstrand), who is horrified to find that he can watch her disease with complete detachment, and her brother (Lars Passgard) for whom she represents the mysterious attractiveness of the opposite sex. A crisis is reached when, after a number of hallucinations, she seduces the boy.
Actors:
Harriet Andersson, Gunnar Björnstrand, Max von Sydow, Lars Passgård
Directors:
Ingmar Bergman
Writers:
Ingmar Bergman
Aka:
Sasom I En Spegel
Studio:
Tartan
Genres:
Drama
Countries:
Sweden, Drama
Awards:

Reviews (3) of Through a Glass Darkly

I must admit I was beginning to find Bergman's other works slow and ambiguous, but 'Through a Glass Darkly' has restored my faith in enjoying so called 'mastepieces'.

It begins by slowly drawing the viewer into a world confined by four very well defined and flawed characters, then creates a tension between them and the story.

This intensifies leading to frightening conclusion, that I found more startling then so called 'horror' films.

I recommend this film to anyone who enjoys bizarre, frightening thrillers with characters that you really care about.

Not a film to "like", but powerful and grips the attention - Through a Glass Darkly review by CP Customer

Through a Glass Darkly, written and directed by Bergman is like a three-act play about four characters over a 24-hour period. Dealing with a case of incurable schizophrenia and its effects on the other three characters, there is little to lift the mood of this grim film. But the acting and direction are impeccable: 50 years later, it retains its plausible, natural style. The observations into behaviour and interactions are Bergman at his best. Its not a film to "like", but it is powerful, grips the attention and sure tells its story.

Spoilers follow ... - Through a Glass Darkly review by NP

Karin (Harriet Andersson) has recently been released from an asylum having undergone electroconvulsive therapy. She returns to her isolated family home and rejoins her father, writer David (Gunnar Björnstrand), teenage brother Minus (Lars Passgård) and husband Martin (Max von Sydow), with whom she has an awkward sexual relationship. In fact, she seems more flirtatious with Minus, who is confused by his feelings for her. Unable to sleep one night, she finds and reads David’s notes about her ‘incurable’ condition, and his desire to record her ‘disintegration.’

This is a Swedish film directed by Ingmar Bergman in bitingly bleak black and white. The only cast are the four characters, and the only setting is their remote island home, which Bergman manages to make both idyllic and claustrophobic at the same time. Karin’s decline is slow, and she is lucid enough to be tortured by it.

Also tortured of course, are those around her. There is an impotence about Karin’s family, as quite clearly they do not know how to handle the prospect of her instability – but in the case of David, has his detachment contributed to Karin’s inability to relate to her own husband? Or has she always been unreachable? We never know, despite the very talky nature of the production (and the English subtitles). The fact that Karin’s condition seems to be the reason Minus and his father finally grow close is scant reason for celebration.