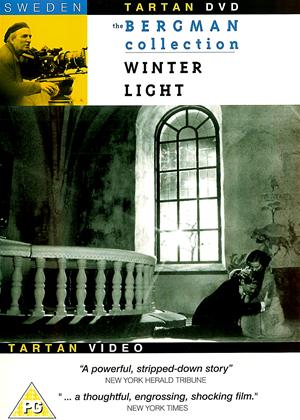 Synopsis:
The second of Ingmar Bergman's trilogy on faith, Winter Light springs from Bergman's desire to define man's relation to God - if He exists. A village pastor, unloved and empty of faith, reveals his bitter failure to offer spiritual consolation to his flock. Sombre and poignant, the film sketches a world of half empty churches - but a world not entirely without hope in God's universe. The story brings together four personalities in a shared quest for spiritual reassurance. A susceptible and disillusioned fisherman (Max Von Sydow) is urged by his wife (Gunnel Lindblom) to seek solace from his local priest (Gunnar Bjornstrand).
However, the priest is struggling to regain his own belief - a tragic and intimately depicted conflict, in which he is eventually supported by the cynical resilience of the local school mistress (Ingrid Thulin).
Actors:
Ingrid Thulin, Gunnar Björnstrand, Gunnel Lindblom, Max von Sydow, Allan Edwall, Kolbjörn Knudsen, Olof Thunberg, Elsa Ebbesen
Directors:
Ingmar Bergman
Writers:
Ingmar Bergman
Aka:
Nattvardsgästerna
Studio:
Tartan
Genres:
Drama
Countries:
Sweden, Drama

A heart in winter - Winter Light review by WS

Something I've always admired about Bergman's films is his use of light. Here, the photography expertly captures the austere and dignified beauty of the snow-bound landscape and the Medieval church interior. Not a film for people who insist on an action-packed three-act drama with neat resolutions to everything, yet it is definitely more than just a character study or atmosphere piece - it is a film about how inner struggles play out in the outer world.

Tomas Erikson, the pastor, celebrates Mass and performs his other parochial duties obediently, but without enthusiasm. He feels that God is distant and finds it difficult to reconcile his Christian faith with the adversity he has encountered during his life. His suffering has become a chasm separating him from his fellow human beings, rather than a bridge to empathy with them - he is self-absorbed, judgemental and sometimes callous. But the viewer can sympathise with his spiritual confusion and the fact that he is acutely aware of his own failings as a minister, thanks to the remarkably sensitive performance by Gunnar Björnstrand. One of the other principal characters is Marta Lindblom, a schoolteacher with whom, it is implied, Tomas has been having an on-off affair for some years. Marta is everything Tomas is not – warm, vivacious, generous, optimistic, and mentally resilient. Although openly agnostic, she provides a better illustration than the pastor of how to live a Christian life.

Inspired by the director's own struggles to maintain his own "childish piety", as he put it, in the face of life as actually lived, "Winter Light" is not heavy on theology, but is a deeply humanistic film that explores, among other things, whether it is possible to "save" someone who has given up not only on God and Man, but even on himself.