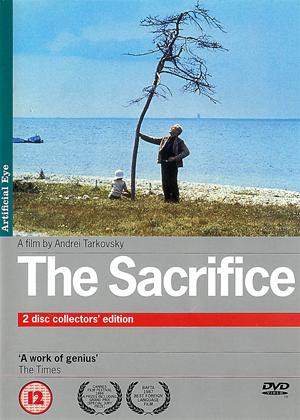 Reviews (1) of The Sacrifice

I'll begin this by saying it's Tarkovskys darkest film I've seen, but also equally as beautiful as a film like The Mirror or Stalker, Solaris. We meet Alexander who is planting a tree and relaxing with his son, we then meet the postman called Otto who is a dear friend of Alexanders. What ensues is a lot of vast cinema, we hear hints from Alexanders family that he isn't okay in the head. Then Alexander receives a gift that's mailed to him, we hear hints about his life as an actor etc. we then hear the first mentions of the word Sacrifice and how the gift acts as a sacrifice.

What follows is all out nuclear war and there is a lot of drama where I think the film lost it's touch really, but it does regain it towards the end and some of the final scenes are up there with anything Tarkovskys ever done, so all in all it's certainly worth a watch. If you're going to though I'd recommend you'd watch Solaris/Stalker first, then Mirror, Andrei Rublev, Ivans Childhood and then this one and Nostalgia just to get a general idea of his filmmaking approaches etc.