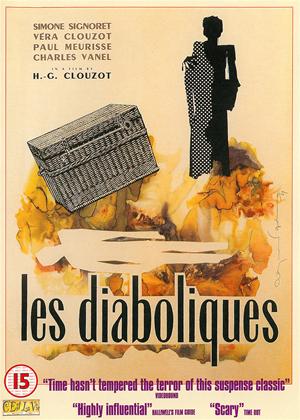 Have heard loads of great stuff about this movie so thought I would give it a go. I have to say I was impressed. Considering its age this film stands up amazingly well in todays special effects soaked cinema. Watch it! you'll never guess the ending........

This film works. Why? It's got a GREAT script - and the fact that the director, the actors and everyone else remembers that is why it works, even though it's a bit dated now. It was updated in the 70s or 80s - but this first version is better. It is genuinely creepy - far more than any horror movie - and keeps the audience guessing. The tension crackles right till the end. One of the best films ever made - in France or anywhere. Watch it and learn.

This French dark comedy is a masterpiece. A good plot, good acting and beautiful black and white photography. If you don't like old films you will be pleasantly surprised, if you do, it is fantastic. Theatrical acting is the usual spoiler for these but this (although a little dramatic in parts) is well played even by today's wooden standards.

A lot of people think Alfred Hitchcock was a unique director who will forever be in a class of his own. They obviously haven't seen anything by Henri-Georges Clouzot, who was as good if not better at racking up nail-biting suspense as Hitchcock at his best ever was, especially in his two masterpieces, this movie (which Hitchcock wanted to make, and would have if Clouzot hadn't already bought the rights to the source novel) and "The Wages Of Fear". And if Clouzot is the French Hitchcock, "Les Diaboliques" is definitely the French "Psycho", despite being made five years earlier.

The plot revolves around a situation which Hollywood in the fifties would have considered very strong meat to the point of being borderline unfilmable. A young woman is married to the headmaster of a ramshackle private school, who is unfortunately a petty tyrant who treats his physically frail wife abominably, and openly conducts an affair with one of the teachers (Simone Signoret, far more hard-boiled and sleazy in this film than Hollywood ever allowed her to be, even when she was playing a sexually conflicted were-panther), knowing that his wife, who he cynically married for her money which he needed to buy the school, will never divorce him because as a Roman Catholic she believes it to be a mortal sin. Unfortunately for him, his mistress, whom he treats no better than his wife, has come to hate him, and between them the two women concoct a seemingly foolproof scheme to get rid of him once and for all.

It would require multiple spoilers to say much more about the plot, though it won't ruin any surprises if I reveal that, as in every other movie ever made in which someone commits "the perfect crime", things don't go entirely according to plan. Its strength lies in the fact that at absolutely no point in the story do we know what's going to happen, because there are no clearly defined heroes who are obviously going to triumph in the end, and the plot-twists that start to arrive thick and fast quite early on are so utterly bizarre and inexplicable that maybe, as the title implies, there's something truly devilish going on. The brilliant screenplay keeps you guessing right until the very end, to the point where you don't even know which genre the film belongs to - is it a weird but ultimately straightforward murder mystery, or has it crossed the line into supernatural horror?

Everything that happens once the plot gets going, which it does very quickly, is incredibly tense due to the constant uncertainty. Even the most trivial of random incidents which wouldn't normally matter suddenly matters one hell of a lot when you're trying to commit murder without anyone noticing. And then it gets weird. So weird that the audience have no more idea what's really going on than the characters do. And, despite the complete absence of either gore or the kind of cheap jump-scares Hitchcock wasn't above using in "Psycho", it gets much scarier than just about any of the so-called horror movies being made at the time, and most of those made since, mainly because the characters and their situation are believable, so the intrusion of the seemingly impossible into their world is as terrifying to them as it would be to us. It may be over 60 years old, but this film is still a masterclass which should be compulsory viewing for anyone planning to make a thriller, because they simply don't come any better than this.

It is widely reported that Henri-Georges Clouzot (director) beat Hitchcock to the rights of the novel "Celle qui n'etait plus" by Pierre Boileau and Thomas Narcejac. The rights were in good hands, Clouzot racks up the tension in a cleverly understated way.

Paul Meurisse as the autocratic headteacher of a rather rundown Paris school shows evil in every breath. He abuses his wife Christina, played by Vera Clouzot, she is the rabbit caught in the headlights, a nervously sustained performance. Simone Signoret plays Nicole another teacher at the school openly having an affair with the head. A steady, confident performance. How either of them stuck with this thoroughly nasty man is an enigma but then there would be no plot and no scary ending.

The two female leads look as if they belong in different movies; rather, different centuries, their clothes, hairstyles, voices and even mannerisms.

A stylish film and Hitchcock turned his attention to Psycho.

A classic thriller that has aged very well. Apparently Hitchcock was pipped at the post by Clouzot in a competition to buy the film rights to the original novel. In the event, Clouzot does an immaculate job.

The story is perfectly paced and the plot twists never feel contrived.

The cast is excellent, with a special mention for Simone Signoret, perhaps the best female actor in European cinema in the 1950s and early 1960s. Her beauty has nothing to do with the innocence that some of her rivals tried to project, and she is at her most subtle in 'Diabolique'.

On many a person's favourites list, and it's easy to see why. What film lover can say no to a well-made suspense thriller with more twists and turns than a wormery. Add to that a cast to die for under one of the world's most acclaimed directors, and it's no wonder this is so famous and so well liked.

Of course a film like this relies heavily on the way tension is maintained throughout, and it is pretty unlikely the man who made 'The Wages Of Fear' is going to make a botch job. For all that 'Les Diaboliques' does feel a touch long, with some scenes having a slightly repetitive tinge to them. The other cavil i have is that near the start there is a heavy hint of what is going on. In the end though the sheer class of the whole thing sees it succeed with ease.

You would never know from watching it that Simone Signoret had major ructions with the director over contract issues, amongst other things. Ultra-professionalism personified.