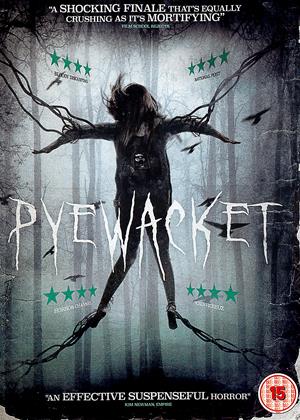 Synopsis:
After her father dies, teenager Leah (Nicole Muñoz) is forced, by her unstable mother, to leave her friends behind and move to a house in the woods. Feeling isolated and hopeless, Leah turns to Black Magic to release her anger. She naively performs an occult ritual found in a book on her bedroom shelf to invoke the spirit of a witch to kill her mother. Terrified by strange occurrences, and stricken by guilt, Leah desperately tries to reverse the spell, but soon realizes she has awoken something sinister...and nothing can prepare her for the terror that has been unleashed.
Actors:
Nicole Muñoz, Laurie Holden, Chloe Rose, Eric Osborne, Mikey Brisson, Romeo Carere, James McGowan, Bianca Melchior, Victoria Sanchez, Neil Whitely
Directors:
Adam MacDonald
Producers:
Jonathan Bronfman, Victoria Sanchez Mandryk
Voiced By:
Missy Peregrym
Writers:
Adam MacDonald
Studio:
Signature Entertainment
Genres:
Horror
Countries:
Canada

Yes, this is a teen angst story. Yes, the teens are of the troubled Goth variety so unappealingly stereotyped in so many films. But don’t despair! Director and writer Adam MacDonald portrays them in a very sympathetic manner (the obligatory expletives are a little forced, however) and they emerge not only as strong characters, but their group is a vital one considering the inconsistency that exists at home.

Leah (Nicole Muñoz) is missing her dead father, and her mother’s up-and-down alcohol-induced mood-swings are making her unhappy. A keen reader of occult books, she rashly performs a Black Magic ritual to be rid of her mother – and then regrets it. By then, of course, it’s too late.

This is a pleasingly altered take on the familiar ‘summoning a demon’ story, and the modest budget is used to good effect, with bumps and jolting camera angles providing more naturalistic chills than CGI (which is used, but very sparingly) or wildly choreographed jump-scares. The new house Leah and her mother (Laurie Holden) move into is tailor-made for a haunting and is surrounded by acres of terrific Blair Witchy woodland. The acting is very good from all concerned, especially the two major females, and it becomes a blur as to just who is possessed and who is the victim.

It’s a low-key slow-burner with a familiar narrative, but with enough enjoyable details to satisfy.

Bratty Teenager wishes her Mother Dead and Conjours up a demon to do the deed.

Next day she has a rethink and Wishes she hadn't done it , realising her Mum is a Good Mum after all .

Too Late ,You Get What You Wish For , Hideous Girl sadly survives the movie ,Innocent People Die .

A supernatural paranoia drama worth seeing - Pyewacket review by BG

Pyewacket is an interesting movie.

'Leah' is a teen with several 'goth' friends and an interest in black magic, who finds herself suddenly moved to a new town by her erratic mother, who is desperate to move on with her life after the loss of Leah's father.

Yanked away from her life and a burgeoning (and very sweetly played) romance, Leah's pretty academic interest in black magic turns practical, and she casts a highly intricate spell to summon a demon to kill her mother.

For those viewers expecting flashy effects and a high body count; turn away now. This is not that kind of film.

Pyewacket is a moderately slow-burn horror-drama that relies on drama, unease and uncertainty to unnerve the audience. Almost no special effects actually occur (except one), with most of the strange events being conveyed by sound effects or the cast's reactions. It's also largely a relationship drama between the daughter and mother, so if that doesn't float your boat either, you'll struggle with this one.

Where it does succeed is with a lasting sense of unease. It can be 'read' several ways and explores issues of grief, mental illness and teenage angst. It also takes its subject of black magic pretty seriously, suggesting that it's seriously perilous to play with for a vast variety of reasons, and that if doesn't get you via supernatural forces it'll still mess with your head.

But worst of all, Leah's reasons for acting out and deciding to unleash a death curse on her mother are nowhere near good enough. Yes, we buy that teenagers have tantrums and lash out (we've all been that age), but barring one single awful remark, her mother doesn't really do anything too dreadful. Frankly 'Harry Potter' had better reasons for wanting his adoptive parents dead, and the powers to do it ;)

It's also not very well structured. In most films, even if you tell the moments when they move from the middle into the 'endgame', you can feel it because of the pacing and the scriptwriting. In Pyewacket, the film slams to a sudden and jolting end, just when it feels like there should be another 20 or 30 minutes left to go. It's disorientating, badly executed, and caused a brief 'what the hell?' resentment and irritation. It feels like the film ends in the 'Second Act'.

However, bearing that in mind, it still lingers in an interesting way. There are scares, there is atmosphere, there is well described mythology. It's just a little brief in its conclusion.

Well, it's certainly worth seeing.

If that sudden ending doesn't put you off, it's an interesting supernatural drama.