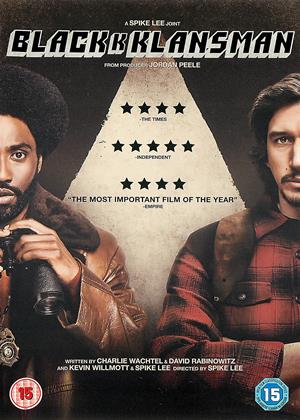 I think the film gets better marks than it deserves because of the nature of the story, It deals with a weighty issue and even if half true it's an amazing story that deserves to be told. It never gripped me, however. Surely this was a dangerous and threatening time but you never felt the danger, instead there was an underlying flipness about it that undermined any sense of authenticity. I also thought the lead, John David Washington, lacked screen presence, charisma and gravitas.

A great film from Spike Lee. Though set firmly in the past, he doesn't miss a trick making the parallels to the present-day stand out. Arguably a little heavy-handed at the conclusion, perhaps, but it's totally forgivable, and largely reinforces what's gone before. But aside from the history (more in a minute), it's an enjoyable, rather funny and very well-made film. There's a spectacularly well-framed crowd scene at a rally early on, and a jarring juxtaposition of a recounting of a lynching with a Klan ceremony at the end. Strongly recommended!

... But just be aware that, although large parts of the film are based on a true story, the film's plot apparently does veer from reality towards the end, largely for dramatic (and it is *dramatic*) reasons. Also forgivable.

Wow. What a superb piece of film-making. - BlacKkKlansman review by PR

We found this completely gripping, beautifully made, thought-provoking & ultimately very depressing, to have it brought home so clearly how little has changed over the decades. A brilliant film.

Spike Lee at his best as director in a gripping tale based on a true story that stretches credulity (as does much going on in America now as then). The idea of a black cop infiltrating the KKK sounds fantastic, but the manner in which this is done and the risks incurred form the base of a tense and exciting plot that highlights themes about racism that - as the ending of the film illustrates - remain all too pertinent. Excellently acted and told. Surely a strong Oscar contender?

Comedy with a serious message - BlacKkKlansman review by GG

Set in the seventies, a comedy on the face of it, but with a serious message. Well scripted and acted it left me thinking has modern America moved on or gone backwards, can this endemic racism ever be eradicated? A thoroughly enjoyable and thought provoking movie.

I was looking forward to this movie as much like Fixing The Shadow (aka Beyond The Law) deals with an undercover cop infiltrating the Hells Angels in a light hearted, yet sometimes dark manner, BlacKkKlansman details the events surrounding the infiltration of the KKK by a black police man...in a similar fashion...in that much of the 'police station' scenes lend a lighthearted edge to an otherwise dark subject.

The cast of this movie is spot on! Having only experienced Adam Driver in the recent Star Wars trilogy as Kylo Ren, he proves he can do 'normal' here in an outstanding performance as Ron Stallworth's 'White'-patsy. The overall tone of the movie evokes the period of time extremely well and there are some great performers lending themselves as Klan members. Topher Grace is amazing as David Duke (the Grand Wizard of the KKK), again only having witnessed his work in 'That 70's Show' and Spider-Man 3 he really adds a level of disgrace to the character that far outweighs his 'comedic' talent.

The ending that then cuts to recent footage of similar issues still present in the USA makes you realise how much things haven't really changed over the 40 years since the movie's events took place and the real-life footage of David Duke from only 3 years ago is shocking! But I guess a leopard doesn't change it's spots...and he is still a despicable human being! Spike Lee always delivers...and here he does it with the usual panache!

My only niggle...and this might just be me is that John David Washington put me in mind of John Richardson (the comedian) in the way he uses some facial expression and certain elements of Ron Stallworth's character and it threw me for the first 20 or so minutes of the movie! But otherwise this is a fantastic way to spend a couple of hours!

It's hard to believe this is a true story and if you didn't know that, you would have trouble suspending your disbelief especially during the darkly comic moments.

As another reviewer pointed out, given what the undercover cops were up to, the tension could have been more palpable but despite this, the acting is superb, the staging well observed and the story is gripping from beginning to end.

The subject matter is difficult of course but the story is easy to follow and although the apotheosis is all too depressing, this film should be on everyone's list.

This is an absorbing film.

Brilliant true story which tells an amazing tale of black power and white supremacy (KKK). The acting is first rate and I hope it gets lots of awards.

Sadly the last few scenes, bringing the story up to 2017 sadly shows how little has changed in the USA.

PLEASE MAKE THE EFFORT AND WATCH THIS MOVIE.

This is a funny, enjoyable and visually exciting film which conveyed the issues of the time well.I

Ok, it is tough to make fun of the injustice and ugliness of the then prevailing white attitudes, but ridicule is a potent weapon, particularly when juxtaposed with the empathetic black characters.

A refreshing change to see so many black characters.

My only minor criticism is that the lead character's body double was to me obviously Jewish...

Based on astonishing true story - BlacKkKlansman review by CW

Another WOW from the brilliant director Spike Lee. I agree with all favourable reviews. Hard to believe that this outlandish story is true! Script is from the book written by Ron Stallworth. As always with Spike Lee movies, the casting, directing and story are perfect. My gosh what a lengthy career. There are funny moments and shockingly vile moments and at the end you see actual footage of recent racial hatred in the US. Timely. Now Trump firing up the frenzy of racists. A must see.

Going by the above views you'd think this was the film of 2018...it's okay and watchable but the plot isn't that exciting and based on true events (Hollywood often overly dramatises them) about a black cop behind a police under cover operation in Colorado Springs (possibly late 60's early 70') and a fellow Jewish officer playing the same person 'Ron Stallworth' (one from the office the other in practice) to infiltrate the Ku Klux Klan and it's members. Generally slow in nature until towards the end when the Klan acts on a civil rights march.

Spike Lee has reawakened in the 21st century as that biting, scathing, and thoughtful filmmaker we haven’t seen as vibrant in decades. If his 2015 film Chi-Raq was the warm-up act, Blackkklansman is the main course. It takes a serious and silly aim at the exposure of America’s racist collectives, past and present. Lee draws a sharp blade in his direction of portraying the racism that has somewhat mutated over time but hasn’t left us. And it’s every bit as frantic and furious as it should be or at least as Spike Lee should be during these tough times of racial divide.

The story focuses on the true story of a 1970s police operation in Colorado Springs. Their goal is to infiltrate the local chapter of the Klu Klux Klan and reveal the inner workings of the secretive organization. Ron Stallworth (John David Washington) is the latest addition to the force as a black cop trying to earn his stripes but not be shoved down by some of the racist colleagues. Graduating up from the storage room, he becomes a detective involved in the intelligence department for gaining information on the local KKK. That’s a hard game to play when you’re black but an idea strikes Stallworth. He picks up the phone and calls up a KKK member, pretends to be a white man, and is accepted for screening into the group. The plan works but now he needs a white for the off-the-desk spying, which is where Detective Flip (Adam Rider) comes in.

Stallworth and Flip are both committed to their case that they’re willing to go the extra mile. Flip goes deep into the local KKK that is so secretive they don’t even refer to themselves as such. This leads him down a dark and dangerous path where in order to sell the role Flip must conceal his Jewish nature. A lie detector test with the clan is averted when Stallworth chucks a rock through the window and Flip plays along by shooting off a few rounds in Stallworth’s direction. Of course, this doesn’t impress the police chief one bit and the validity of this operation is brought into question. They’ll prove it by not only going deep into the actions of the white nationalists but do so without a single cross-burning cropping up around them.

While Flip struggles to keep up his allegiance towards the clan, Stallworth tries to do the opposite, infiltrating a black protest group as one of his first assignments. It’s not easy for Stallworth when he comes to be infatuated with the young revolutionary Patrice (Laura Harrier). He hasn’t revealed that he’s a cop to her given her disgust for the establishment, not even hearing out the possibility of restructuring from the inside. Not an easy relationship to establish as a man who must be a black rebel in the streets and a white man on the phone.

Lee’s direction here is perfectly on point to the degree that can not only encapsulate the era but dwell on the somewhat comedic nature of how this whole plan came together, made evident with the odd casting of Topher Grace as KKK leader David Duke. The film has real teeth to its savaging of the racist organization and how important such an investigation turned out to be, despite being concealed. And just in case you think the film becomes too fantastical with its bow-wrapping conclusion, the film abruptly cuts to modern footage of racist rallies with a voice-over by Donald Trump refusing to call out the white nationalists. You can just hear that cranky middle-aged audience member stating that they liked the film until it had to bring more recent politics into the picture. Spike Lee doesn’t care. The events of BlackKklansman are not a fantasy escape into history. History repeats itself if we’re not careful and Lee’s film has the gravitas to speak, nay, scream that we’re stumbling hard.