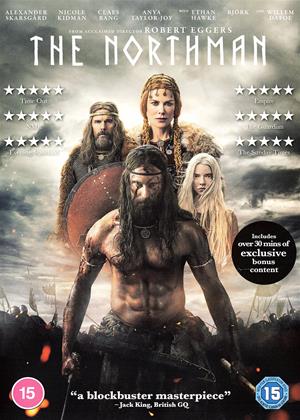 Reviews (3) of The Northman

Despite a lot of accolades director Robert Eggers latest violent revenge adventure is a bleak, enigmatic and morose film that failed to enthralled me. Set in the 10th century it's based on an ancient viking story which in turn is the tale Shakespeare used as the basis for Hamlet. Alexander Skarsgård plays Amleth who has a child witnesses the murder of his father, a king (Ethan Hawke), by his uncle (Claes Bang), who also carries off his mother (Nicole Kidman). Amleth manages to escape and vows revenge. He grows up into a pumped up warrior and eventually finds an opportunity for vengeance. As a sword & sorcery film it has elements of fantasy, plenty of gut wrenching violence and some sex but it takes itself so seriously that the film doesn't really entertain. Basically a quest narrative in which the flawed 'hero' gets to fall in love as well as kill a fair few enemies. There's an awful lot of growling and dancing around camp fires with mysticism and heavy accents that are sometimes difficult to understand. A brutal, nihilistic story that is too deep to really grab you with characters that are all mood and not ones to root for. Kidman is good and gets a couple of very good scenes, Willem Dafoe and Bjork cameo and Anya Taylor-Joy is the love interest. I preferred the more mythical The Green Knight (2021) than this.

Terrible - The Northman review by cr

This weighs in at over 2 hours and i lasted half an hour.

We are treated to spirtitual mystiscism with characters surrounding shamens and barking like dogs. Hmmm.

The rest is raping pilaging dirge. The director must be a lovey favourite as it was massivley praised on release but not for me.

I made a real effort to go to the end. Grunts and violence all along. It makes me cry to see films like that can find a producer and a director. I read a couple of scripts which would make an outstanding film but the writers are not known and don't have connections. It is so unfair. What a waste of art!

Director Robert Eggers is building quite the filmography of period pieces that delve deep into the cerebral. With The Northman, he takes us deep into a Viking revenge epic that is more than just a picture of brutal violence and a cold depiction of the era. It has all that if that’s your jam but also offers far more by taking aim at toxic masculinity, spirituality, and legacy, beautifully portrayed in that horrific style of surrealism that only Eggers can weave so well.

Taking place in 895 AD, Amleth (Alexander Skarsgård) had grown up knowing the ways of the Vikings. He had been instructed by his father, King War-Raven (Ethan Hawke), on how to be a Viking prince from a young age. The extent of that training verged from the spiritual of seeing his own past and future to the grotesque of eating like a dog and craving violence. His whole world is turned upside down when the revenge-fueled Fjölnir the Brotherless (Claes Bang) topples his brother’s reign. Without a kingdom, Amleth devotes himself to revenge.

But Amleth’s quest isn’t one of satisfying violence. Rather, it’s a draining experience that doesn’t so much grant him the peace he desires. Yet there always seems to be a lingering sensation that satisfaction is one sword swing away and a chopped-off head away from a sweet victory. Nearly dead, he has visions of Valhalla, the heaven he feels promised if he can find a way to die in battle. That peace won’t be an easy one to find, realizing that dying for revenge is not enough. You need to die to ensure life will continue. It makes his brutal vengeance less fulfilling when realizing just how far his terror will span.

What’s most interesting about this film is not so much the battle of men as the women who occupy such a world. Consider how the film poses Amleth’s mother Queen Gudrún (Nicole Kidman). At first, she seems like you’re a typical damsel in distress in the way she doesn’t challenge either War-Raven or Fjölnir in any of their violent endeavors. However, we soon learn it’s because she goes with the flow and favors the darkness that she is born into without much choice. Rather than wage a quiet war, she embraces how manipulative she can be for a world that devalues her. It makes her surprising turn all the less surprising when considering what little influence she has beyond her own ambitions for power within a tribe.

Similar in determination but seeking something more is the slave Olga (Anya Taylor-Joy). She’s aware of her traits that can easily frustrate Fjölnir and chooses her battles wisely. Naturally, Amleth finds her to be both a worthy ally and a suitable wife to pursue. They both wage a secret war on Fjölnir and begin developing their own future. It gives Amleth something to fight for beyond just power. Power is nothing if you have nobody to share it with and if it doesn’t grant certain freedom.

Amleth’s adventure is a mixture of the supernatural and the horrific. He discovers a magic sword to conquer his enemy but acquires it through a trippy sequence of fighting the dead. His nightly slaughters of Fjölnir’s forces lead to some grizzly murder scenes, where body parts are arranged in a shocking manner that even the most hardened of men would break into disgust. The violence grows all the more grander as it does darker, to the point where the scene of Amleth and Fjölnir dueling on a volcano is as thrilling as it is telling about how empty such revenge leads men who have grown to know nothing but this engagement.

The Northman doesn’t quite have the same level of surrealness as the previous Eggers movies of The Lighthouse or The Witch but it’s still pretty damn good for what it sets out to be. It may be his most accessible of films given how overt the plotting is with the surreality of lineage and manhood dressed up in trippy yet short sequences. Even for being one of his worst, Eggers has still delivered what may be one of the best Viking movies ever made, for whatever that mantle may be worth.