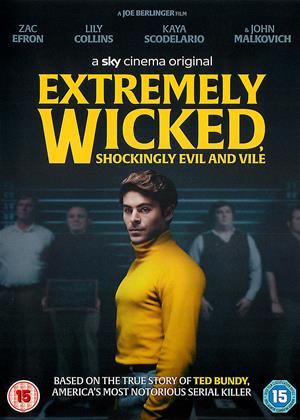 Rent other films like Extremely Wicked, Shockingly Evil and Vile

Zac Efron delivers a performance ten times better than the film itself in this story of real-life serial killer Ted Bundy and his long-term girlfriend (played by Lily Collins), who has no idea of her partner's crimes until he is arrested.

Focusing on the years from Bundy's first killing to his execution on death row, the film is told from the perspective of Bundy's girlfriend. The problem is the film becomes increasingly less interested in the girlfriend and even Bundy, despite them being the main characters, and much more interested in the details of the murders (although there's no onscreen violence, in a well-thought-out decision from director Joe Berlinger). She becomes a non-descript character, despite her significant screen time ... he never becomes more than two-dimensional: we never truly get to the bottom of how Bundy hid everything from her, why she sticks with him even though it becomes increasingly clear he is guilty and he is lying to her too, or why he did what he did. It doesn't really work despite some nice touches on the way (the director, who has a background in documentary, puts in nice period detail and odd unsettling moments throughout).

Zac Efron is the reason to watch the film, though. As well as being alarmingly physically and facially similar to Bundy here (albeit with added Hollywood abs), he's got that heightened charisma of a psychopath nailed down and he becomes increasingly animated and delusional as the film goes on. He captures the cracks in the Bundy persona well, too. You can see why he was attracted to the role - there's a lot to work with here and it's another string to his bow. He's becoming really quite a different actor and he's now a long way from High School Musical.