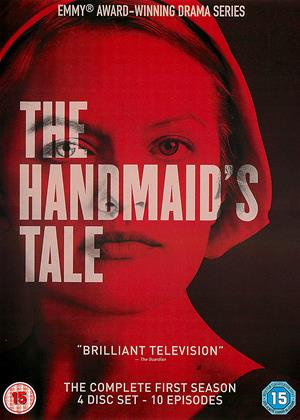 Reviews (2) of The Handmaid's Tale: Series 1

Not what I expected - The Handmaid's Tale: Series 1 review by MD

Futuristic fantasy. In a Dystopian future worldwide pollution has caused infertility. People live in back to basics religious fundamentalist communes, where women are forced to breed with the leaders. The ideas behind the story are interesting, but the program in fact dwells in female bodily functions much of the time. Ostensibly this is a sci-fi, but having seen 7 episodes, I would categorise it as misogynistic porn, even though there is no nudity. There is a persistent preoccupation with pregnancy, menstruation, rape and abuse of women. The abuse may be being inflicted by other women, but that doesn't make it any more acceptable. I don't know what kind of audience this program is aimed at, but I am starting to feel a little queasy.

As a big fan of Margaret Atwood's novel, I was always going to be a little edgy about a long adaptation - and, for that matter, one that was aiming for a second series. But I've enjoyed watching Elisabeth Moss in the title role and many (though not all) of the additional pieces of storyline worked well for me. Of course, you have to be into the premise of watching a dystopian fertility horror story played out in high definition - so it won't be for everyone, but I would love to see the novel Oryx and Crake given the same treatment.

The Handmaid’s Tale dabbles in a truly chilling bit of speculative and dystopian fiction. The dark future finds America transforming into the totalitarian state of Gilead. This world came about of the infertility of the world and the desperation of powerful forces to ensure the survival of the human race. Those in power, however, are not doing so through some moral imperative but through religious dogma and in the name of traditional values. In other words, the world went backward and women are now second-class citizens by the elite.

Elizabeth Moss plays the woman known as June. She was once a wife and mother. But when the revolution came, she was captured and forced to become a Handmaid, a woman who is forced to bear children for the state. As such, she is forced to stay in the home of a powerful individual and birth a child that she will give up to the family, against her will. June is also given a new name, Offred, named after the housemaster she will supply a child towards. She converses with other Handmaids. Some are seeking a revolution, while others keep their heads low and others simply lose their mind and become suicidal.

The season is told non-linearly, shifting between the rise of such a state and June’s somber existence that follows. I really dug the way this show chooses to explain its world slowly through bits and pieces. Think of how lackluster it would be if the show just had a text prologue about how religious whackos bombed the pillars of government and instituted unethical policies regarding women. We instead see how it was more than just that one event but a series of compounding forces, where women were scowled at by men and spoke openly about women would be happier if they were out of the workforce.

There’s been some criticism that The Handmaid’s Tale seems too fantastical to happen but this ignores the bigger point about such a dystopian story. Nobody talks about 1984 as being some inaccurate presentation of history just because the year it references didn’t bring about the exact duplicate of Oceania. Everybody talks about how its aspects of double-think and invasive security have threatened critical theory and thought. It has now become shorthand in referring to totalitarian states with stripped freedoms of thought and opinion to simply compare to 1984 or declare it Orwellian based on the author George Orwell. So why shouldn’t Handmaid’s Tale also become shorthand for women’s rights?

The timing of the series couldn’t have been more poignant. The show debuted not long after Donald Trump was sworn in as the US President and, sure enough, certain rights of women have stripped away. It is not illegal to get an abortion in certain parts of the South. It is not illegal to seek transgender treatment in certain states, even if you’re an adult. It is now easier than ever to discriminate against the LGBT community considering Trump banned transgender people from the military, an action that those within the military have bought back against. Because of all this, protests started to crop up of women in Handmaid’s Tale uniforms, signifying the dark future we could be headed towards.

The first season finds a perfect balance of dread and despair, tinged with sparkles of hope in June’s small acts of defiance. We get to know a lot of the characters and their sordid affairs. We see how the elite are deeply flawed beyond just their blind faith in everything being God’s will. The show is packed with great drama and an angering depiction of the elite’s grip on the rights of those who don’t comply with the religious right’s fanatical vision of the world. For aiming at such unnerving provocation, The Handmaid’s Tale gets the job done while still being some of the finest television produced in the 2010s.