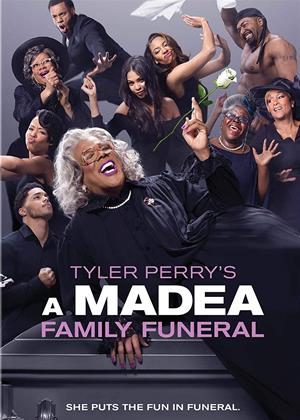 Not released
A Madea Christmas

Not released
Meet the Browns

Not released
The Family That Preys

Not released
I Can Do Bad All by Myself

Not released
Boo 2!: A Madea Halloween

Not released
Temptation: Confessions of a Marriage Counselor

Reviews of A Madea Family Funeral

A Madea Family Funeral walks with a stumble between the lines of darkness and comedy. One of the most troubling scenes features Perry playing the straight-man adult as well as the chatty Madea in a car with two other elders. They’re pulled over by the police. Perry believes the cops will be reasonable while Madea fears something bad will go down. I thought about how this film is about a funeral and wondered if this would be the inciting incident; a cop murders one of them and a troubling funeral follows. How could I have been so foolish? Whenever Madea is about, everyone is a cartoon character. The cop, though belligerent and sneering in trying to conceal his racism, is portrayed like a cartoon villain who we know won’t gun down our characters. Isn’t it hilarious that a cop almost shot up a car full of black people? You know, like in real life?

Madea films are tough to watch in how they favor lukewarm humor and melodrama, sometimes sprinkling in a half-thought message of either society or faith. In this instance, one of the aged members of their clan dies in an embarrassing way at a hotel. Determined not to tell the family the manner of death, Madea and friends aim to keep this act a secret for fear of what it would mean to the family, on the day of a wedding anniversary no less. Sad but also funny. Or at least the film wants us to find this aspect of the picture funny because, hey, nothing more hilarious than a funeral.

On a darkly comedic note, this structure could’ve worked. But, as with all Madea comedies, we just cannot escape melodrama. At the same time of the funeral is a tale of infidelity and troubled relationships that must be resolved. If you’re familiar with the Madea formula by now, you know the drill. We’ll get the subplot of one woman being wronged by a troubled man who says all the wrong things and does all the stuff. The quiet drama goes back and forth until finally Madea will step in with her wise words telling her to both dump the man in her live and try to find forgiveness to be a good Christian. What, you didn’t really think we were getting away from religion in a Madea movie, did you? Especially one that involves a funeral.

Even though none of this meandering and mumbling story stuck, I can’t fault the film for too much. Unlike a lot of other Madea productions, this picture never steers too far off course in either its premise or its comedy. Everything remains on a sturdy enough track that, while never really garnering more than a mere smile here and there, always prevented some offensive area from being stumbled into. For example, one of the elderly members of the family calls another gay for wearing tight pants. Thankfully, the conversation ends before he can spew some homophobia in a script that I honestly expected to roll into these odd paths of dated comedy. Madea never comes off too brash for her own good, a relief considering I fully expected the central figure of Diary of a Mad Black Woman to trip over the casket and start screaming at the top of her lungs.

A Madea Family Funeral is about as funny as any family funeral can be really; sometimes garnering smile but questionable ones at that. There’s just enough heart so that Madea and her family don’t come off too much like darkly comedic monsters during a grave time, focusing more on remembering the fun aspects of life than the dour. For as far as Madea comedies go, this one is tolerable for how much less manic is shoved into the picture.