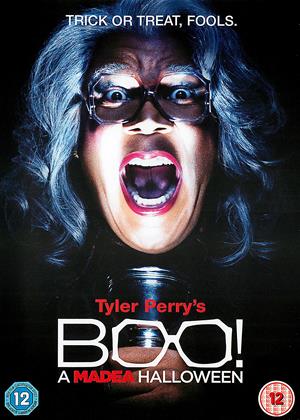 Reviews of Boo!: A Madea Halloween

I mean… it’s okay, I guess, as longs as you’re not expecting anything extraordinary out of Tyler Perry’s screenwriting and directing, and if you’re not of drinking legal age, and if you’ve seen a grand total of 5 movies in your lifetime, and if your criteria of assessing films is solely based on your previous experience of 5 watched movies in full tally. A, who am I kidding: Boo!: A Madea Halloween is barely watchable a film, period.

Remember Blaxploitation films? Tyler Perry sure does, and tries very hard to mimic their subversive nature by employing some (if not all) tropes which made said films unique in a bizarre kind of way. Sadly, while certainly saving some talent beneath those worn robes, Perry’s quest for churning quantity quickly overshadows potential quality, thus rendering his features slightly above the worthless curve. This is not to say his movies suck, but are in a euphemistic kind of way: redundant.

Boo!: A Madea Halloween tries to cash in on the American ways of living, namely capitalizing on each and every turn, with each upcoming Holiday after another: and this time, it’s plucking the Halloween theme in full throttle.

The plot involves your stereotypical dame in distress trope which, sadly, doesn’t fully develop throughout the rest of the film. Also, Madea’s Halloween uses Bahtin’s carnivalization (flopping conventions on their head, clowning around etc.) in order to try and prove a funny point – usually a punch-line that doesn’t have the anticipated impact as it, I’m guessing, had on paper.

But, let’s ignore for a moment everything I said, and concentrate our efforts on the good parts, which Boo!: A Madea Halloween unarguably, has.

First off, the entertaining shtick: with his funny cross-dressing antics, Tyler proves he can pull out an elderly woman, and funny one at that. Also, his writing packs enough punch to deceive a chuckle or two, without it too much relying on large people tripping and falling down the stairs (albeit, plenty of those too). The maxim ‘so stupid it’s funny’ can be also checked off the bucket list, since the film gives off an intentional unintentional funny vibe that made me laugh several times (out of avoiding embarrassment, I kept the laughs silent and undetectable – just like passing gas in a room full of CEO’s during a very important meeting regarding the future of the company).

Finally, I must point out that Madea’s editing was somewhat off-putting and even distracting at times. Especially when main character Tiffany took the stage: it felt overdramatized and overacted, and not a tad bit subversive or funny.

To conclude, Tyler Perry’s latest (as of Jan 2017) dubbed Boo!: A Madea Halloween is surely, mhm, watchable at times.