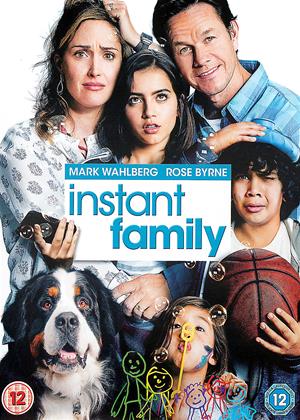 Hats off to all the foster folk. They are few people who can cope with their own kids, let alone someone else's, often with major problems. Apparently based on fact, and is OK to spend hour and half on. Quite harmless and predictable.

generally a goodwatch. reasonably funny and a feelgood film - not to taxing on a Friday night.

of a similar feel to Uncle Buck - if that floats your boat - dive into this.

Instant Family is a film that means well enough and has a big enough heart that almost warrants its melodramatic premise. The very story seems like a sturdy foundation for some soapy and slapstick worthy family comedy that can teeter between being a breezy weeper and goofball chemistry born from the Will Ferrel school of comedy. In other words, it’s a film that puts in a decent enough work to earn the mildest of smirks and waterworks.

Pete and Ellie Wagner (Mark Wahlberg, Rose Byrne) are a fairly new couple seeking to start a family. They have a brand new house and are hoping to fill it with children. They’re good people in the sense that they always want to do the right thing and have a tremendously big heart. When Ellie starts looking into adoption, Pete warns that looking through the pictures of kids waiting to be adopted is going to make their hearts melt and want to adopt a lot. Sure enough, Pete sneaks a peak and can’t help himself. They embrace and know they want to do the right thing. It’s a sweet moment that also fills me with dread for the soapy and ridiculous domestic comedy that follows.

When they venture to the adoption agency, the humor is still there with perfect chemistry between Octavia Spencer and Tig Notaro playing educated and quirky social workers. They put the likes of Pete and Ellie through the new parent boot camp, making sure they won’t be the worst choice. The worst choice by far is a shrill single woman who basically wants to pull off The Blind Side in her own life. But then the Wagners go to find the kids that are right for them and they end up with a trio. They adopt the punkish teenager Lizzy (Isabela Moner), the fearful boy Juan (Gustavo Escobar), and the eccentric girl Lita (Julianna Gamiz). Things get off to a rough start and it’s pretty clear that the bumbling couple of the Wagners, well-meaning as they may be, are not fully prepared.

But is it even a spoiler to admit that it all works out in the end? I had no doubts that by the second act anger of the parents wanting to dump the kids back in foster care would not happen. We become too used to Wahlberg and Byrne as warm souls that taking such a turn is too dark. It’s also inevitable that the film would drop an easy bomb of a shocking event bringing the family together and watching them spring into action. There’s some family melodrama where the Wagners fight for the custody of the children and it’s a battle just heartfelt enough to come off more charming than hokey.

Let’s be clear though; Instant Family is not averse to the expected theatrics of such a subgenre. There are plenty of scenes where the Wagners trip all over each other and fumble about in trying to make their home feel like home. I’m thankful that the height of this hilarity occurs fairly early on where a disagreement at the dinner table turns into a scene of food and drink falling off the table in slow-motion. There’s at least the neat little touches of a small fire at the table and the cute little Lita appearing like horror icon Carrie when covered in food and brandishing a Spongebob butterknife. Give that kid a horror movie role ASAP!

Director Sean Anders of Daddy’s Home fame pretty much delivers on the PG-13 family comedy we’ve come to expect from the director; bound by stoner farce stagings with family-friendly writing. What’s most surprising is that there are a few moments of new-parent exuberant where the Wagners are astounded when their kids finally call them mommy and daddy. There are a few of these adorable scenes inserted throughout a routine comedy that could use a few more of those warmer moments.