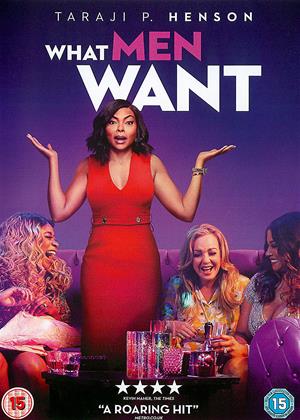 Reviews (4) of What Men Want

Having seen Taraji P Henson in Hidden Figures I was expecting this to be good but it was just embarrassingly unfunny.

Stopped watching it after about 20 mins.

Looked at the special features and watched the gag reel....even that wasn't funny.

I like girly films but this was just a bit boring, very predictable and I switched it off half way. The kind of film where if it was on TV I would watch the end of it. Saying all that, some parts I watched were funny.

Don't bother with this one, spin off from the movie 'What Women Want'' staring Mel Gibson and Helen Hunt and comes nowhere near it.

Poor, overacting by leads with no real storyline and halfway through I wondered why I was wasting my time watching it ? Rather watch paint dry.

Dreadful waste of my life - What Men Want review by MT

I consider the original Mel Gibson film "What Woman Want" a very good film. Just the right amount of comedy and drama from the 'I can hear woman's thoughts' plotline. But this re-make with a switch of a man to a woman missed the mark completely. The whole family watched it (3 daughters) and no one laughed. In fact the incessant diatribe from the protagonist become irritating within a few short minutes. We got to the end which means 1 star but I really cannot recommend this film. Even the subplot with the new man and son being passed off as her family was mis-played. So basically nothing good except for the pace which keep us going until the bitter end.

In an age of gender-swapping remakes, something like What Men Want seems like an easy enough sell. What Women Want featured a man endowed with the telepathic power to read the minds of all women and use it to his advantage. Now the tables are turned as a woman receives the power to read the minds of men. Much like the original, such a premise holds lots of promise. Sadly, just like the original, it wastes most of that potential as well.

There’s reason enough to pull for the sports agent Ali Davis (Taraji P. Henson) to outsmart the men around her. She works exceptionally hard but has yet to be made partner and her boss explains she just doesn’t connect well with her all-male partners. What more can she do? Pissed off, she vows to work even harder and party-out all her rage. One party, in particular, leads her to a psychic who gives her a potion and a head injury. When she awakens, she can hear the thoughts of all men. The gender cheat code has been activated.

The mind-reading humor proceeds down a fairly predictable track. She reads the mind of her pensive assistant and finds out that he’s nervously suppressing sexual thoughts, leading to her exploding on him. She reads the mind of her co-workers and learns of leads which can help advance her career. And, perhaps the most expected of readings in this romantic comedy formula, she’ll figure out what guy is into her when to make a move on a date and which moves to make in the bedroom.

Of course, these powers will backfire but in a really weird way that shifts from this film being less about girl power and more about the quirks of sexism. Most of the men in this film are portrayed as cartoonishly despicable and while that could be funny, they’re more or less used as props for Ali’s truth powers to reak havoc. When reading the mind of her date who is more interested in the waitress, Ali will kick him in the balls. When reading the mind of a wedding groom, she knows the truth about him sleeping with other women, announces this revelation and a fight breaks out. Ali’s use of her powers from this angle seems less about landing that contract with a major athlete and more about stirring up as much panic as possible.

What Men Want still has its moments of hilarity because Henson has an ease with comedy, even if most of it is relentlessly loud and slapstick. But the ultimate message of listening more to the heart than the head carries a weird message for a film that pokes fun at the troubles of sexism in the workplace and wraps it up with a fantastical ending. Ali’s ultimate ending to the film is that she quits the sexist agency, starts her own agency and falls in love with the handsome athlete. This is not exactly the most unexpected of endings considering how ludicrous the rest of the film has been but it seriously avoids addressing these issues with anything more than escapism and ball-kicking. A film with so much promise wastes it all on the easiest of comedy.