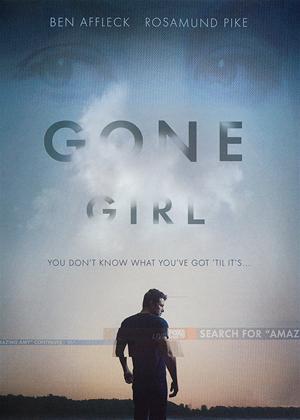 Look, it's OK to suspend one's expectation of reality when watching a thriller - things happen that we never experience in real life, bizarre situations, adventures, explosions, coincidences, superhero cops, incompetent cops, evil baddies etc etc. You name it, we see it and run with it all in the name of entertainment.

But once in a while along comes a film that is so ludicrous in its proposition that it becomes laughable, so unfunny that it's not even a black comedy. That film is 'Gone Girl'. Not only is the storyline ridiculous (wife in failing marriage develops detailed plot to frame her husband so that he is sentenced to death for her murder, but after slaughtering another man she returns to her hubby, so entrapping him for ever and ever), but the acting is truly dreadful - and yet this awful film has been repeatedly praised.

Now, it may be that my tastes are out of kilter with the rest of the world, but so be it. Frankly, this is one of the most dire films I have ever seen. Nor did I like the excessive f-ing and blinding, nor the bogus rough sex.

I was expecting something rather good from a David Fincher film, who after a somewhat hesitant start with 'Alien 3' has directed some pretty reasonable films, including 'Se7en', 'Fight Club', 'The Curious Case of Benjamin Button', 'The Social Network' and even the unnecessary US remake of 'The Girl with the Dragon Tattoo'. But I didn't expect this...

I made a serious error of judgement watching this over-long pile of manure. 1/5 stars - and that's being generous.

DON'T GIVE AWAY SPOILERS, EVER!! - Gone Girl review by MG

A message to RP - NEVER, EVER, give away so much detail in your reviews. Shame on you for posting it. You're entitled to your opinion of course but what you did was shameful! At the very least post a Spoiler warning. It does amuse me though in your review that you had such a problem with bad language as I could certainly think of a few choice names for you! Shame also on Cinema Paradiso for allowing your review to stay. Should be removed post-haste.

As for the film, pretty good I thought. Yes there is a lot of mumbling at times but I like this, makes you strain harder to listen to what the character's are saying. In all honesty there were no likeable characters in this film but that's okay, not everybody in the world is a nice person. Yes I guess some of the twists and turns may surprise, even annoy some people, but so be it. Fincher has never been one to care too much what people think.

What a waste of over 2 hours of my life! Appalling acting by all of the cast and so cliched it was cringeworthy. I have no idea why this film has been raved about, really, really crap!

Read the book. Much, much better - Gone Girl review by RS

Yet another mumbled incoherent American actor. What is it with these actors? Haven't they heard about proper speech projection? Opening the mouth to articulate the words ? Anyway, back to the film. The book is so much more subtle and I agree with the others who say that the film is pedestrian.

What an excellent, twisted thriller. It keeps you gripped throughout and trying to resolve what’s going on. I won’t say anymore, as it would spoil the movie. Just watch it!!

I was stunned at how inept this movie was, and only kept watching to the end to see what new depths would be plumbed. The plot is utterly ludicrous and unbelievable on any level, the dialogue frequently painful and cheesy, and the acting by the two leads is completely wooden. It's impossible to take seriously as a thriller, my only thought is that it must be some knowingly awful parody of the worst throw-away TV movies in the genre. Obviously, these things are subjective, but I'm seriously baffled as to why this appealed to anyone.

Ludicrous but fun feminist fantasy thriller, but tiresomely overlong - the end 20 mins should be cut - Gone Girl review by PV

Why must they make such long movies? This was fine at 2 hours - the last 20 minutes and the silly plot developments there really annoyed me as they were just not necessary and make a ludicrous thriller way too worthy.

This is based on a feminist fantasy novel, so maybe the fault lies with the author - but cuts are good! Kill your darlings and make a neat efficient thriller, not one that overstays its welcome!

This starts off really well - the first act is great as is the first half of act 2, and then, right on the button half way through the movie there is an 180 degree turn (which tells, doesn't show) the true nature of the characters (no spoilers here!).

Yes, it's all absurd and silly - but so are most movies and novels too, when you think about it. Just enjoy the ride - it's the best bunny boiler movie for years.

Some genuinely funny scenes, though the plot is so full of holes it could be a Swiss cheese.

Good to compare with another study of female as disease evil, in the recent Brit flick LADY MACBETH (based on a Russian novella).

Just a shame about that unnecessary final 20 minutes - the movie would have been far better if the edit had dispensed of the loose-ends tie-up then. Better perhaps even to change the ending totally from that in the novel, as is usual in movies from GREAT EXPECTATIONS to many MANY more. There were opportunities to end at the 100 minute mark - and the plot does 'jump the shark, rather in the final act.

The review titled 'over-long pile of manure' gives away the story and the ending. Don't do what I did and read it before seeing the film FFS!

I also disagree with the review 'over-long pile of manure' and... - Gone Girl review by SM

I too recommend not reading it (I didn't until after I'd seen the film - phew!).

I would recommend not listening to a word it says. I wasn't expecting much from this film and loved it. I think that's all that needs to be said. No spoilers here!

David Fincher’s Gone Girl is a strikingly deep and shocking commentary on the perception of both gender and marriage. How far can a woman get away with hearsay? How far can a man fall on proposed slander? And, more importantly, how far can the media go to mutate the he-said-she-said story into something that could be easily manipulated behind the scenes? These are all very uncomfortable questions with no easy answers that Fincher dares to tantalize in this off-beat drama. Suffice to say, it may not be the best movie for a first date.

Nick Dunne (Ben Affleck) is in a marriage he doesn’t care for with his wife Amy (Rosamund Pike). He owns a bar that does little business, cheats on his wife with another woman and spends more time talking with his sister than his wife. Upon returning home for their anniversary, Nick discovers a shattered glass table and a missing Amy. The cops mount an investigation, but there is a trail of clues that seem to suggest he might have killed her. Her diary speaks of her love life being drained, describing Nick as frustrated and abusive. There are a series of insurance adjustments and credit card bills that appears as though Nick had this all planned out. All eyes are on Nick and everybody suspects him from the cops to the neighbors to the national news.

It’s pretty clear to see that it is Amy herself manipulating this missing person fiasco, but the why is the real mystery. She has a few clear motives to want to get back at her husband, but the lengths she goes for revenge are far too elaborate in their intricacies. Amy drains a massive amount of blood on the floor of her house only to clean up as though Nick were covering up evidence. She stages relationships with neighbors to stir the pot of the gullible and gossipy. Being this devoted to her scheme reveals a clear bit of insanity considering this isn’t her first time riding the crazy train of character assassination. This is a woman who truly feels that she has left a piece of herself behind and uses all her tricks of modern gender perceptions to get what she wants out of life (if she even wants anything).

At the same time, Nick also uses the media to his advantage as he must maintain his stance as the victim rather than the murderer. Despite knowing the truth, he must sell his innocence in a way that is believable to the judging public and the media jackals. It’s a draining game he plays when his wife, miles away with plenty of cash and pawns, holds all the winning cards. Even when he bares all his truthful infidelities to the public, it’s still not enough to convince anyone of not murdering his wife. But Amy’s plan is not so simple as several variables force her to drum up even crazier methods of getting back on solid ground.

Gone Girl has all the makings of a mile-a-minute sexy drama in the same league as Basic Instinct and Fatal Attraction. It pulls out all the stops and ventures fairly deep into the well of implausibility, but keeps the tension constant enough to forgive its shortcomings. The plot keeps itself engaging, whipping away from one character to another and barely giving the audience a moment to catch their breath or question the logic. What helps draw our eyes more is the way Fincher puts an artistic flair on the minutia of a dying married life. The entire film is seen in desaturated tones and there is a creepy vibe to the staging of the shots. It perfectly captures the nightmare of a relationship that has dropped to a dark place where it will continue to fester.

Gone Girl is a sick, depressing, bloody, sexual and even comical film that holds a certain nihilism in its subject matter. In its artistic madness, however, there is a certain odd beauty to a story filled with despicable characters doing despicable acts. It could’ve easily just have been a simple bit of trashy cinema where a woman mentally destroys her husband, but Fincher’s direction combined with Gillian Flynn’s screenplay and Trent Reznor’s pulsating score amplify the story to a higher level. Rather than simplifying all the emotions from such a contrived plot, Fincher allows the film to violently evolve through its many twists and turns, dancing on the lines of gender roles and media hogwash. It’s such a strange beast you can’t help but be entertained by for all its chaos.