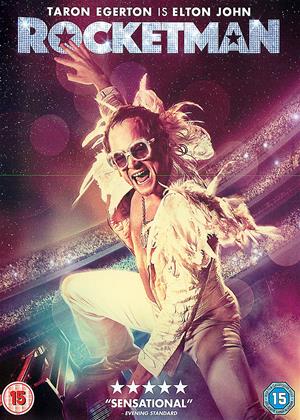 I enjoyed this, but not as much as Bohemian Rhapsody, perhaps because I am more of a Queen fan and have never really been a massive Elton John fan (despite going to a concert on his final tour this very week!).

Both movies are 'based on a true fantasy' and play fast and loose with the truth and timeline - songs written in the 80s feature in the 70s etc (such as I'm Still Standing which is 1983!). Also, I always heard Elton got his surname from Long John Baldry in whose band he played - that is all left out here. As are friendships with Freddie Mercury, George Michael and Princess Diana. It's all 1970s-focused and set, even if the timeline for a lot is the 80s. It's still the 70s in its heart!

I have read am interview with one of Elton's half-brothers (who lives an alternative lifestyle making tee-pees in north Wales) which states the negative portrayal of their father is wrong and inaccurate - and I am sure it is. Drama needs baddies to overcome. I know Elton was estranged from his mum was 15 years until shortly before her death in 2017 because she gave an interview he disapproved of - and Elton's been sober 28 years, it says at the end. SO Elton seems hardly angelic himself in his petty ruthless behaviour and would seem to still have a god complex of some sort.

I found the therapy-like emphasis that a lack of hugs from daddy messed up little Reggie Dwight's head tiresome - as if that matters! Until very recently, dads did not hug their kids. Does that make them all monsters? Arguably, kids were LESS messed up in the past when dads did not hug them every day and when most kids had 2 parents at home, a mum and a dad. Discuss...

As in most movies which show alcohol and drug abuse (eg Wolf of Wall Street) the abuser looks the picture of heath - no days in bed with DTs and cold sweats. Watch The Lost Weekend to see that, or Leaving Las Vegas. Vodka for breakfast is not sustainable!

The gay sex scenes are so mild too - even THAT'LL BE THE DAY the classic rock n roll movie from the early 70s with David Essex showed more explicit scenes. No idea what the fuss is about!

This is really a song and dance movie, (music arranged by George Martin's son), a fluffy musical at heart. BUT a great performance by Welsh actor Taron Egerton which should win him an Oscar but probably won't because he's not black or visibly ethnic - or female. Ho hum...

Good to watch if you're in the right mood, and designed to have mass appeal - a sort of white 1970s Bollywood movie in places (and an Indian dance routine is even there at a fairground scene set in the early 60s. Yeah, right...)

Worth watching just to Taron Egerton's brilliant performance and the music. 4 stars.

Tarun played and sang Elton brilliantly throughout. The story tugs at your heartstrings,

by turns funny, joyful, and very sad, but love conquers all in the end.

I wasn't the biggest fan of Elton going back, but realising how he overcame the effect of such

unloving parents, (apart from his Grandma), I now admire him and celebrate his success and

So looked forward to this film , and I'm sad to say it just didn't live up to the hype , it was just a bit of a pity fest x

I enjoyed this film about the early career of Elton John, which was enhanced by two stand out performances from Taron Egerton, as Elton and Jamie Bell as Bernie Taupin who wrote so many lyrics for Elton to compose the music to them, which he did famously.

Ok, I'm not a fan of Elton John, this certainly did not change that. If someone had made this movie about him he'd have gone mad and sued them for every penny but as he is the exec producer of Rocketman he is clearly happy with this version! Can't think why? If I'd been the emotional wreck as he seems to have been then I'd have not wanted to expose it to one and all but clearly he thinks differently. He has turned his life around now, all credit to him but his early days are quite pitiful. I wanted to like him and feel sorry for him, but I just didn't. I loved the Queen biopic, but this just feels like jumping on the band wagon with less success. Perhaps you need to be a mega fan of Elton John to enjoy this!

I love this film! I approached it with low expectations as i am not a big fan of Elton or taron Edgerton as i didn't like him in the kingsman films (taron not Elton). However i was pleasantly surprised. I think its brilliantly acted by taron and he deserves the Oscar. He did all his own vocals to which was impressive. Even if your not a fan of Elton you will know most of the songs. I sympathized with Elton with his tough upbringing but he showed them all. Great film recommended.

Really didn't like Bohemian Rhapsody and I was ready to hate yet another rock star bio pic to which the subject in question is a little too close — yeah, Freddie Mercury is dead, but the remaining Queen members were heavily involved. However, I was very pleasantly surprised thanks to the clever handling of the subject by writer Lee Hall and director Dexter Fletcher, and an excellent central performance by Taron Egerton.

Rather than a linear telling of John's story, Fletcher and Hall introduce a number of what can be called fantasy sequences that give the film extra interest, while musical numbers are not just concert performances but shared among several members of the cast in these fantasy sequences.

Yes, many of the songs are out of chronological order, but this only adds to the appeal of the quirky and slightly unreal story structure. That said, I thought it was well documented that Elton John took his surname from Long John Baldry rather than the way that is depicted in the film.

Even though the film doesn't flinch from detailing the low points of EJ's life, one still ends up liking the bloke, thanks to Egerton's fantastic performance.

Saturday Night is right for hiring.... - Rocketman review by SW

...this gem of a movie. Its gloriously entertaining with some brilliant song and dance numbers. Very much in the Ken Russell mode of biopics - it presents the hero warts and all and unlike Bohemian Rhapsody feels more honest and also at times plain bonkers. I would have liked a bit more chronological detail and also I don't suspect he was off his head for 10 years - after all he was chairman of Watford then! Its a great laugh and I really liked it.

Not very good although Taron Egerton and Jamie Bell were excellent, and of course the songs were good. Much preferred the Freddy Mercury film. Also, apparently his father was misrepresented as being much colder than he actually was. The film was spoiled for me by being a damaged disc which froze twice and flickered here and there.

First of all the narration seemed a bit strange, almost irritating but I have to say once settled into it we both enjoyed it and the film. It’s enlightening about his life, I would have liked it to go through to his marriage to David, but didn’t feel as if it had ended prematurely.

The singing is superb and likeness to the man himself quite uncanny. God weren’t his parents awful ??

First rental, most happy with it.

It didn’t take long after the screening to hear the question asked of which was better; Rocketman or Bohemian Rhapsody? The answer is without question Rocketman but the question is presented mostly because of the director, Dexter Fletcher. After the major issues with Bryan Singer not delivering on Bohemian Rhapsody, Fletcher was called in to perform last-minute fixes on an otherwise sloppy biopic of Queen and Freddie Mercury. Did Fletcher learn enough from this experience to deliver a better musical biopic? I’d like to think he did.

The story of Elton John is delivered with both compelling drama and brilliant use of his music, blending the two together in a stunning rock opera presentation. We follow him from the first time his fingers graced a piano, the music already forming in his mind. The story quickly takes shape of showcasing the young Elton as a musical prodigy, his astounding abilities turning a mere fascination in repeating music to forming his own sense of style and grace with professional training.

By the time Elton reaches adulthood, he’s played by a most-vocal and emotional Taron Egerton who can effortlessly rock the mic and piano like the true party Elton always seemed to be on stage. While we do follow his career that led to a record deal, messy contracts, and the inevitable use of drugs that is foreshadowed early with a warning, the real meat of this story is delving into the drama behind Elton’s secret sexuality. His homosexuality remains hidden behind his lavish outfits and a painful public perception that he struggles to maintain. He confesses such feelings to his buddy lyricist Bernie Taupin (Jamie Bell), but those feelings are not returned as Elton soon feels their brotherly bond grow distant with time. Elton later opens up to his manager John Reid (Richard Madden) that develops into a sexual relationship with a turbulent development. And even when Elton opens up to his knowing mother, he receives no sympathy.

While there are some dark spots in Elton’s career of music, the music itself never feels distant, always used as the most opportune moments. Watch as a young Elton imagines an orchestra for composing the melody of Rocketman. He’ll later return to this song during a bad trip of drug overdosing, catching up with his younger self with Rocketman lyrics added. The music always feels present and never just used to showcase some concert footage. Even when we do get concert scenes, they’re usually highlighted by a fantastical personal vision, as with his first performance as The Troubador where he seems to defy gravity for himself and the audience with a mighty kick.

By its very assembly, I’ve no doubt that Rocketman does take some artistic license with its subject matter, what with it being a fantastical biopic that uses trippy transitions for skipping around time. But where Bohemian Rhapsody only felt like historical bullet points, Rocketman finds a personal and enthused edge to the wild ride of Elton’s life, wonderfully embraced by the legend himself. Worth noting is that Elton John fought to have this film be rated R to better showcase his life sex, drugs, and rock and roll. As Elton said himself, his life isn’t PG-13.